Bringing The Passenger Pigeon Out Of Extinction 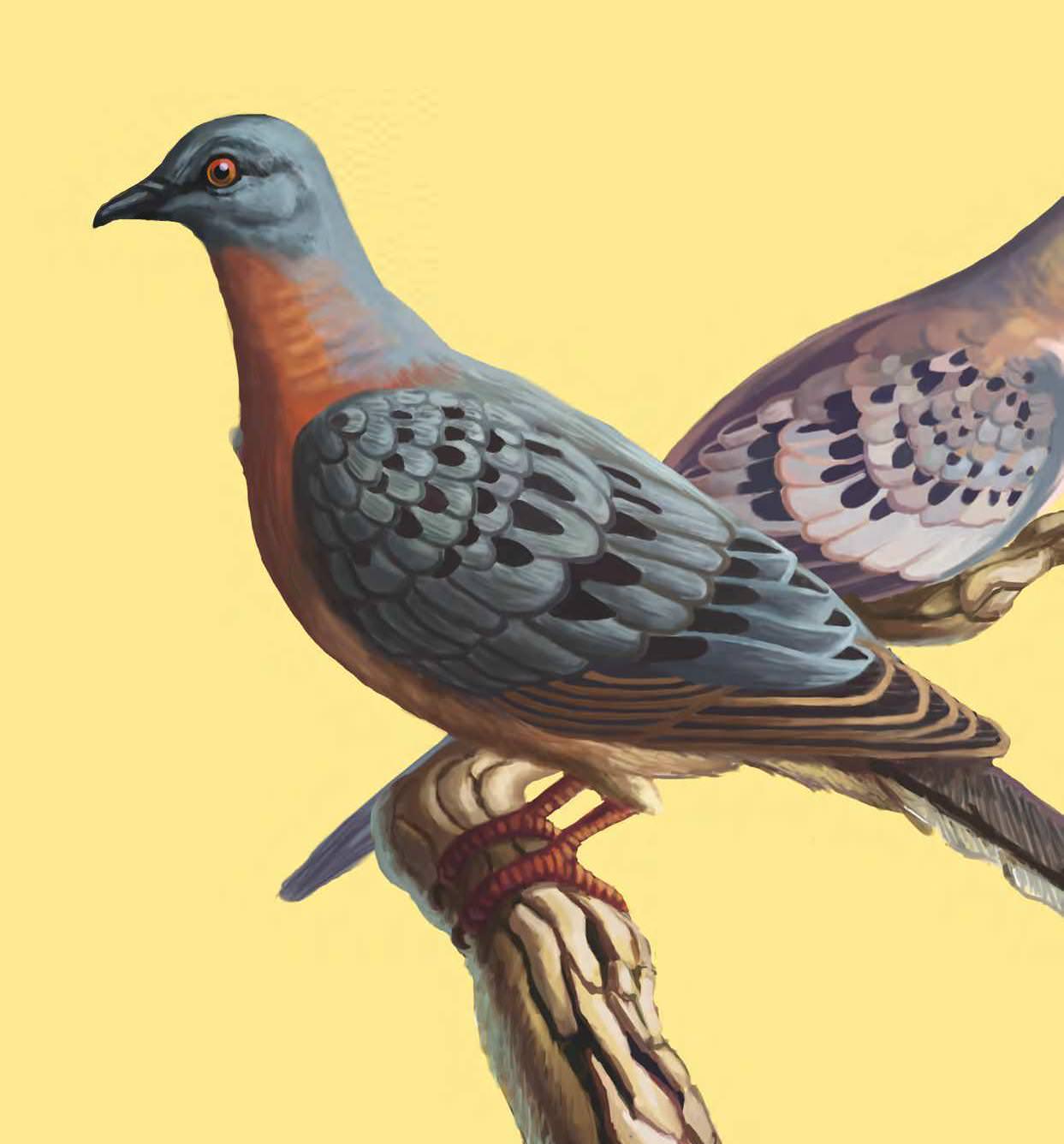 “Conservation has done 40 years of ‘Save the pandas. Save the rhinos. If they go extinct, everything will go to hell.’ And it’s been a lot of doom and gloom with not a lot of emphasis on, ‘Here’s a problem, how do we solve it?’ ” laments ecologist Ben Novak, lead researcher for the Revive and Restore project at the University of California, Santa Cruz.

Novak wants to solve the problem of species endangerment by retrieving genetic material from bygone, taxidermied animals and revivifying it with help from their surviving cousins. It’s all part of a “de-extinction” campaign being funded by the Long Now Foundation, a San Francisco– based nonprofit project that includes the Whole Earth Catalog’s Stewart Brand, novelist Neal Stephenson, musician Brian Eno, and others. Founded in 1996, the foundation is dedicated to “long-term thinking and responsibility in the framework of the next 10,000 years.” Long Now wants to bring back everything from the humble passenger pigeon to the majestic woolly mammoth.

The last passenger pigeon died in 1914, wiped out by humans armed with low-tech muzzle-loaded shotguns and nets. Prior to their eradication, the birds acted as catalysts to biodiversity, clearing forests and spreading guano in a way that promoted new plant growth and animal habitats. But the kind of method Long Now favors for bringing the pigeons back always runs into the same objection/cultural reference: Jurassic Park.

Novak argues that the focus should be less on fear of unleashing the unknown and more on adding new devices in the biodiversity toolbox. “The real moral fiber of the conservation movement for the past 40 years has been, ‘Extinction is forever, so prevent it,’ ” he says. “In my mind, ‘extinction is forever’ should’ve never been the foundation of motivation to begin with, because it implies there’s a finite end to solutions.”

Zach Weissmueller spoke with Novak in his lab at the University of California, Santa Cruz, in June. For a video version of the interview, go to reason.com.

reason: What is a passenger pigeon and when did it go extinct?

Ben Novak: Most people, when they think about pigeons, they think about the street pigeon—the rat with wings. They think of them eating French fries behind McDonald’s dumpsters. That’s not the passenger pigeon at all.

It’s this really beautiful, regal bird. What set them apart from all the other species of pigeons in the world was that they formed these really dense flocks that would be several hundred million birds to a billion birds in size, and they would darken the sky for days. All you have to do is make a quick Google search and you’ll come across dozens of historic accounts, the most famous being from John James Audubon, when a flock flew over Kentucky and blotted out the sun. They were quite a force of nature, and a lot of questions have persisted about this species since they went extinct.

No one was really studying them when they were alive, which was in the 1800s. By the time they went extinct in 1914, there still wasn’t any major ecology science to figure out [all the things] we would want to know. A lot of people have speculated and put together things from historic records, but what was really missing in the equation was being able to study the DNA.

That was what I originally intended to do with specimens from the passenger pigeons. But then Revive and Restore came on the scene with the idea of,“Well, if you can get the DNA to study the bird, maybe you could actually try and recreate the bird.” So it’s become a kind of a hybrid project of studying this species and thinking about bringing it back.

reason: You’ve sketched out this idea of these massive flocks of passenger pigeons. Could you talk about the unique behavior and what made that interesting from an ecological perspective?

Novak: Historically, we know that a giant flock comes into an area, they consume the resources for several hundred square miles, they live in a roosting or nesting site in a tiny spot…and they’re so densely crowded into that area that as they come in at night to roost, they’re overcrowding branches, snapping branches off of trees, sometimes breaking small trees off at the base as they bend them completely over under their weight. And they’re depositing tons of droppings into that area—inches of guano—and that completely, radically changes the biochemistry of the soils. It kills all of the undergrowth that was there, but it also opens up that canopy. All that branch breaking is letting sunlight in.

So you can imagine the next year, when those birds are gone, you get a very thick regenerating underbrush. And that’s what these birds were doing. They were stimulating regeneration cycles. And knowing this about the passenger pigeon ecology, we think [bringing them back] is going to be a major benefit for the ecosystems of the future.

reason: Your process for bringing them back is a sort of hybridization with modern species?