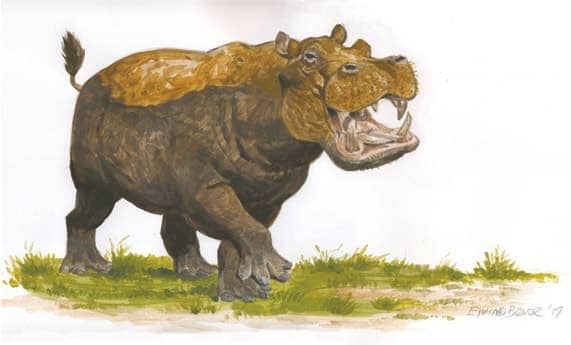 The heat haze shimmering off the baked earth of the African soil distorts large shapes moving in the distance.

The ongoing drought had been driving herds and flocks into new regions in search of fodder and water. Even a part of the once large family of hominids that once populated the lake system had left months ago, following the hope of thunder booming over the horizon and the delectable scent of rain and fresh grass carried on the wind from these distant lands.

For those who remained, life had become harder and harder. Any plant or tree useful for cover and shade had been stripped bare by the numerous megaherbivores, and the dying and dead had brought in large numbers of predators. Getting a drink of water, always a dangerous act had now become almost suicidal as the exposed banks of the drying-out rivers and lakes had become a death trap. Yet you had to drink, and though the night was an obvious time to strike out, the poor eyesight of the hominids compared to those looking to feast on them left them at a distinct disadvantage. Far better was to drink when the sun had passed well overhead—midafternoon, the hottest part of the day when any sane animals were conserving energy by finding shelter and sleeping. 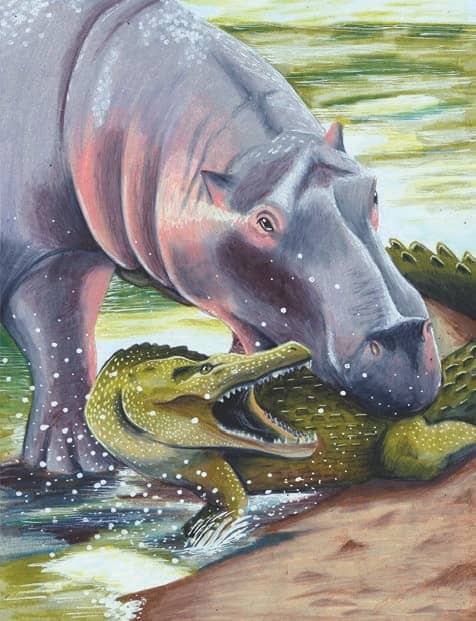 Running from the bare bones of the nearby tree line to a series of previously submerged rocks that now bordered the lake’s edge, five bipedal figures carefully picked their way toward the stagnant, insect infected water to drink.

Normally cautious, the heat and their unending thirst meant the hominids were not taking the care they normally would with such an endeavor, but there had been nothing moving through the heat for some time and the alpha hominid felt it was now or never.

One by one the small hominids drop to their hands and knees and lower their heads, taking long sips of the brackish water. The far shoreline would normally be covered with crocodiles and turtles, but it is even too hot for them and most of those reptiles lay in the drying mud, trying to keep their bodies as moist as possible.

Still, the hominids have enough sense to drink as quickly as they can so that they could retreat to the safety of their forest. This sense of security, however, is a false one because a pair of eyes are watching these small hominids with growing anger. Although the water they drink is minimal, the stress of a collapsing environment had driven almost all animals to change their behaviors, and this male has taken to attacking anything that entered what remained of his domain. 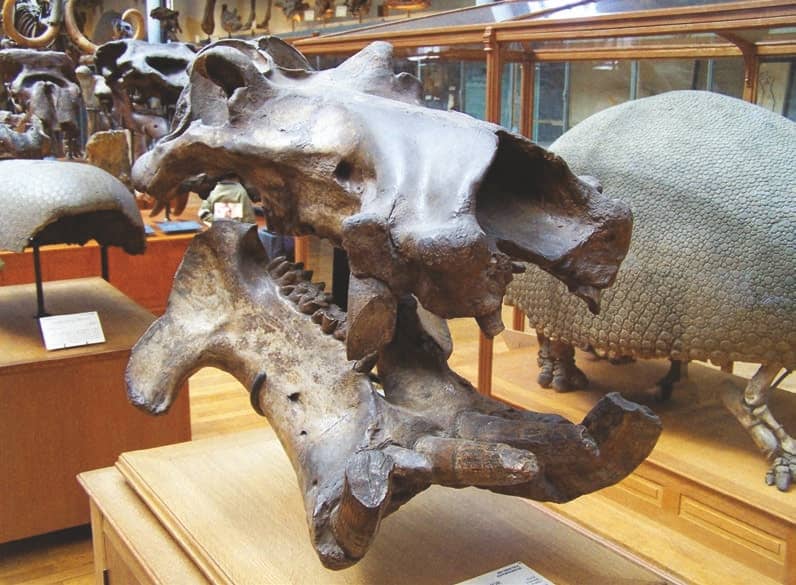 As the hominids finished drinking and began to pull away from the shoreline, an enormous headlined with half a dozen spear-like teeth erupts from the still water and snaps down, engulfing one young male’s head and shoulders. With contemptuous ease the monster flicks its own head and opens its maw, a move releasing the dead hominid, whose limp body pinwheels through the lapis lazuli sky.

The rest of the family screeches in panic and sprints away, their long legs driving them across the cracked earth. Even when they reach their forest, they do not stop. Such encounters will enter the folklore of the only species ever to evolve to record its own history, and although these monsters would be recorded as fire-breathing dragons or subterranean monsters inhabiting the darkest depths of our imagination, the animals behind such stories were all too real and just as dangerous and terrifying as any our imagination could invent.

“You want to do what?” “Prehistoric hippos.” After a few minutes Mike replied, “Why?” Well, one reason is that I once worked for a fossil store in London that had one of the most wicked skulls I’d ever seen for sale. All curvy tusks and thick bone, I would ask customers staring in awe at the piece what sort of creature they thought it belonged to—a dinosaur, a lion? Very few ever guessed a hippo. 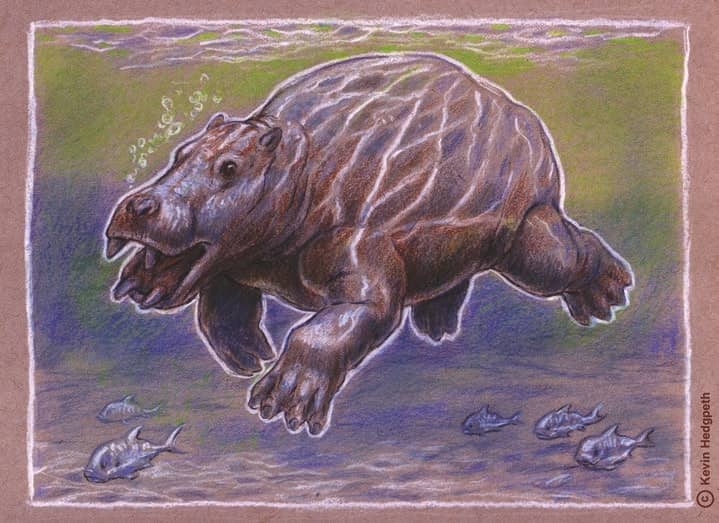 It is one of the oldest arguments in paleontology—just what group are hippos related to? Thanks to modern genetics we now know their closest relatives are whales, but their origins are a complicated mix of maybes and probably-nots. Traditionally classified with the suids (pigs), their most likely ancestor were a hippopotamus-like group of artiodactyls called the Anthracotheriidae. All three make up a stem-group called the Whippomorpha, though this is somewhat problematic because there is also a suggestion that hippos evolved from an entirely different group, the rare and problematic paleochoerids (/pay-le-o-KE-ridz/ ‘old pig-group’) of Asia (meaning they would again be suids). The anthracotheriids may have also been related to the more famous paleomammal group, the entelodonts or possibly even Andrewsarchus.