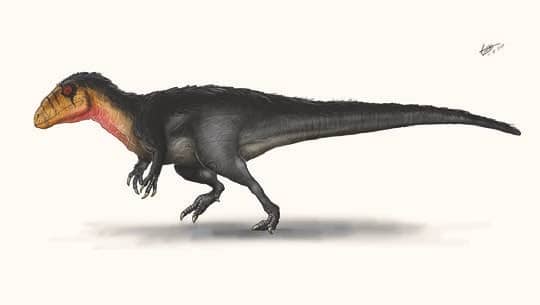 A team of paleontologists from Portugal and Spain have found fossil fragments from a new genus and species of carcharodontosaurian dinosaur. The new dinosaur, scientifically named Lusovenator santosi, lived in what is now Portugal between 153 and 145 million years ago (Jurassic period). The ancient predator was about 3.5 m (11.5 feet) long and 1m tall (3.3 feet), and walked on two hind limbs. It belongs to Carcharodontosauria, a large group of carnivorous theropod dinosaurs from the Jurassic and Cretaceous periods in the clade Allosauria.

“Lusovenator santosi as an early branching carcharodontosaurian allosauroid,” said team leader Dr. Elisabete Malafaia from the Universidade de Lisboa and the Universidad Nacional de Educación a Distancia and her colleagues, “It represents the oldest member of Carcharodontosauria defined in the Upper Jurassic of the ancient supercontinent Laurasia and extends the record of this group, which was already represented in the Lower Cretaceous of Europe.”

The paleontologists described Lusovenator santosi from two specimens found in Portugal’s Lusitanian Basin. One of the specimens is a 153-millionyear-old partial skeleton of a juvenile individual from Praia de Valmitão, the locality of Ribamar and municipality of Lourinhã. The second specimen is 8 million years younger, and belongs to a large-sized individual of Lusovenator santosi. It was collected at Praia de Cambelas, in the locality of São Pedro da Cadeira and municipality of Torres Vedras.

“Despite the great similarity in the theropod faunal composition, the recognition of a carcharodontosaurian allosauroid taxon provides a component of the Upper Jurassic Lusitanian Basin distinct from its contemporaneous Morrison Formation in North America,” the researchers said, “The development of a terrestrial dispersal route connecting these landmasses after the late Tithonian (145 million years ago) could explain the absence of Carcharodontosauria in the diverse theropod faunas of the Morrison Formation and, additionally, their presence during the Early and Late Cretaceous of North America. The new carcharodontosaurian theropod provides the first evidence for sympatry among allosauroid theropods in the Late Jurassic of Europe. Additionally, the discovery of Lusovenator santosi sheds light on a poorly known period of carcharodontosaurian history and adds important data to the knowledge of the early evolution of these allosauroids.”

New ancient DNA study finds that northern mastodon populations were less genetically diverse and more vulnerable to extinction. New research suggests that American mastodons were avid travelers, migrating vast distances across North America in response to dramatic climate change during the ice ages of the Pleistocene. The study, conducted by an international team of scientists, also reveals that mastodon populations that headed northward to the Arctic during warm periods were less genetically diverse, making them vulnerable to extinction. The findings could be useful for modern conservation science.