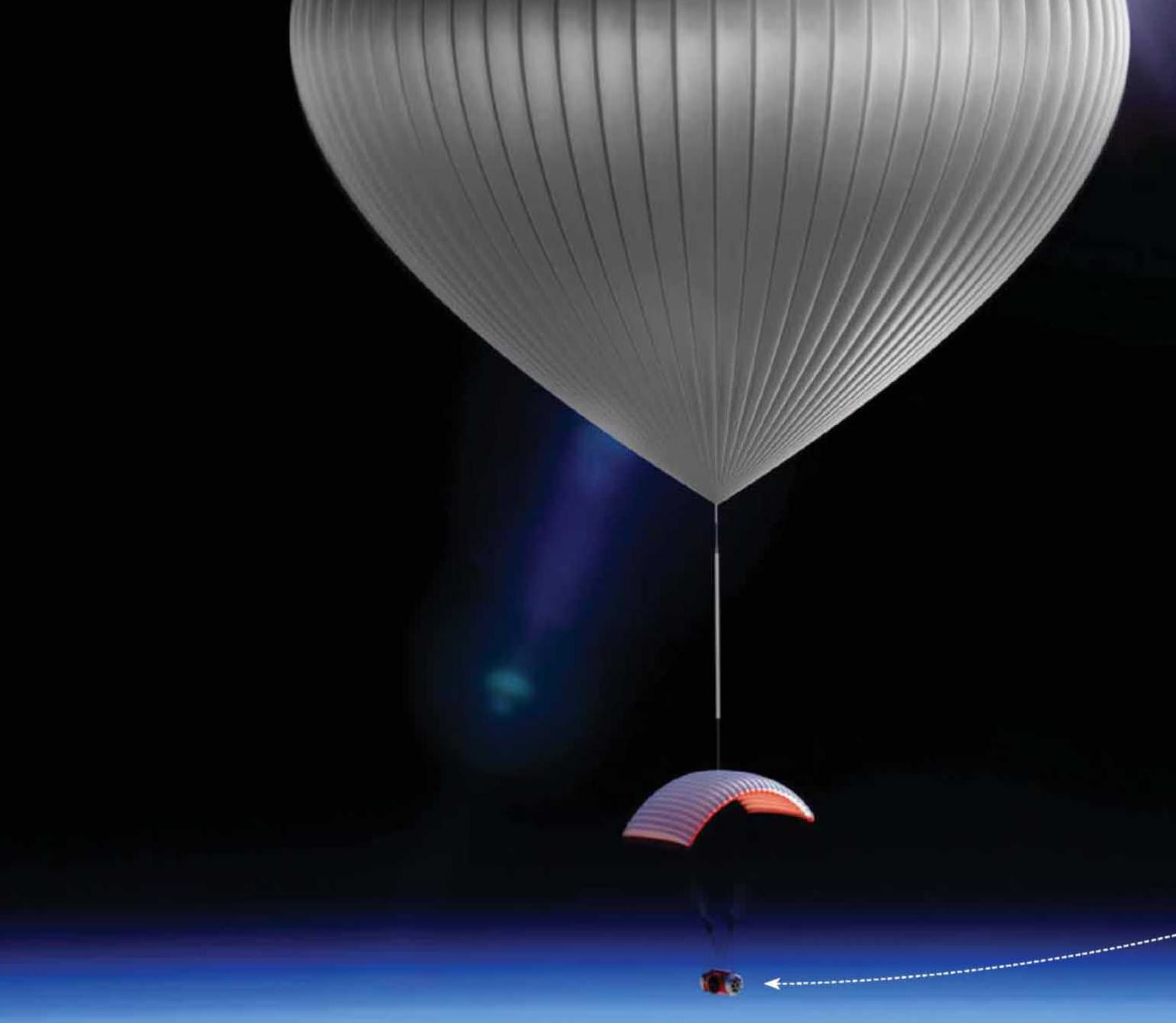 You don't need a rocket to experience space. There's a slower, gentler trip in the works - and it comes with a cocktail.

When Alan Eustace lifted off into space from the New Mexico desert this past October, it was with a quiet whoosh, and a slight jostle of his harness. The 57-year-old computer scientist from Google—outfitted in a 260-pound pressurized space suit—dangled solo from a polyethylene balloon as thin as a dry-cleaning bag. As the balloon rose steadily into the air, the small bubble of helium inside began to expand, and with each mile the balloon changed shape. At first it undulated skyward, limp and oblong, like a jellyfish. Then it grew into a soft, bulbous teardrop. Finally, as Eustace neared his destination, 25 miles above the planet’s surface, it became perfectly firm and rounded, a shimmering object the size of a football stadium. Above him spanned the blackness of space. Beneath him lay what has long drawn humans to these heights: the soul-altering view of the curvature of Earth.

To most, Eustace’s flight seemed the antithesis of space travel, which since the dawn of the space age has been synonymous with the fiery roar of a rocket. The first private companies racing to take paying customers to the edge of space— Virgin Galactic, XCOR Aerospace, and Blue Origin—promise the kind of thrill ride experienced by astronauts. But there’s an alternate space race taking shape, one whose selling point is slow and serene. A handful of startups are rushing to pioneer tourist trips to the stratosphere beneath enormous balloons. “Balloons are a beautiful mechanism for taking off,” Eustace says. “You’re perfectly balanced; it’s perfectly quiet; there’s no vibration as you’re going up.” Once at altitude, passengers will drift with the winds as they peer from the comfort of a pressurized capsule. After a few hours, they will glide back to Earth beneath a wing-shaped parafoil.

For one company, Eustace’s StratEx mission was proof of principle—a “one-man version” of stratospheric balloon tourism, says Taber MacCallum. He and his partner, Jane Poynter, headed Paragon Space Development Corporation, which managed Eustace’s flight plan and built his life-support system. The couple then started World View Experience, a Tucson, Arizona, operation that intends to be the first to take customers to 100,000 feet, or 19 miles, for $75,000 a head. They project the maiden flight will take place by 2017.

Zero2Infinity in Barcelona and Chinese startup Space Vision also anticipate flying passengers in the next few years. They are selling tickets for about $125,000 and $80,000, respectively. The fees are steep, but not when compared with $250,000 for a seat on Virgin Galactic’s suborbital spaceplane, or the $50 million broker Space Adventures charges for a weeklong jaunt to the International Space Station.

Altogether, balloons could offer a more inclusive form of space tourism. “It’s a very slow, gentle ride up and a slow, gentle ride back, and you get to be up there for hours,” MacCallum says. Without the gravitational forces of takeoff and landing, the flight comes with minimal health restrictions. Motion sickness is unlikely to be an issue. Couples might get married in near space, or celebrate a grandparent’s birthday. World View is already taking $7,500 deposits to secure seats on future flights. “We’ve had families sign up and buy the whole capsule,” MacCallum says. “You can take your parents and children. It’s going to be the ultimate Facebook status update:the entire family in space.”

In 2002, two years before Scaled Composites claimed the $10 million Ansari XPRIZE for private spaceflight, Zero2Infinity’s founder, José Mariano López-Urdiales, wrote a paper for grad school entitled “The Role of Balloons in the Future Development of Space Tourism.” In it, he calculated stratospheric ballooning could be a $10 billion-a-year industry. Much of the technology required to send tourists to such altitudes—the balloons, the helium fuel, the pressurized capsules— had been well proved, López Urdiales noted. It’s also relatively affordable and easy to procure.

Rocket flight, in contrast, is both costly and difficult. The public got a stark reminder of that this past fall, when Virgin Galactic’s Space ShipTwo exploded over the Mojave Desert, killing a test pilot. “When you light a rocket, 10,000 things can happen, and only one of them is good,” says Michael López-Alegria, a former NASA astronaut who recently signed on to advise Zero 2 Infinity. With balloons, he says, “you’re not going as fast, you’re not going as high, you’re not putting as much energy into the system.” 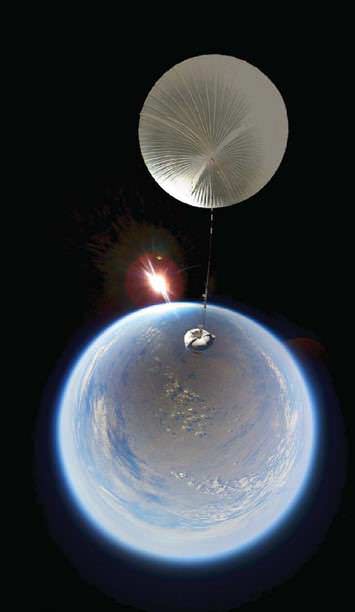