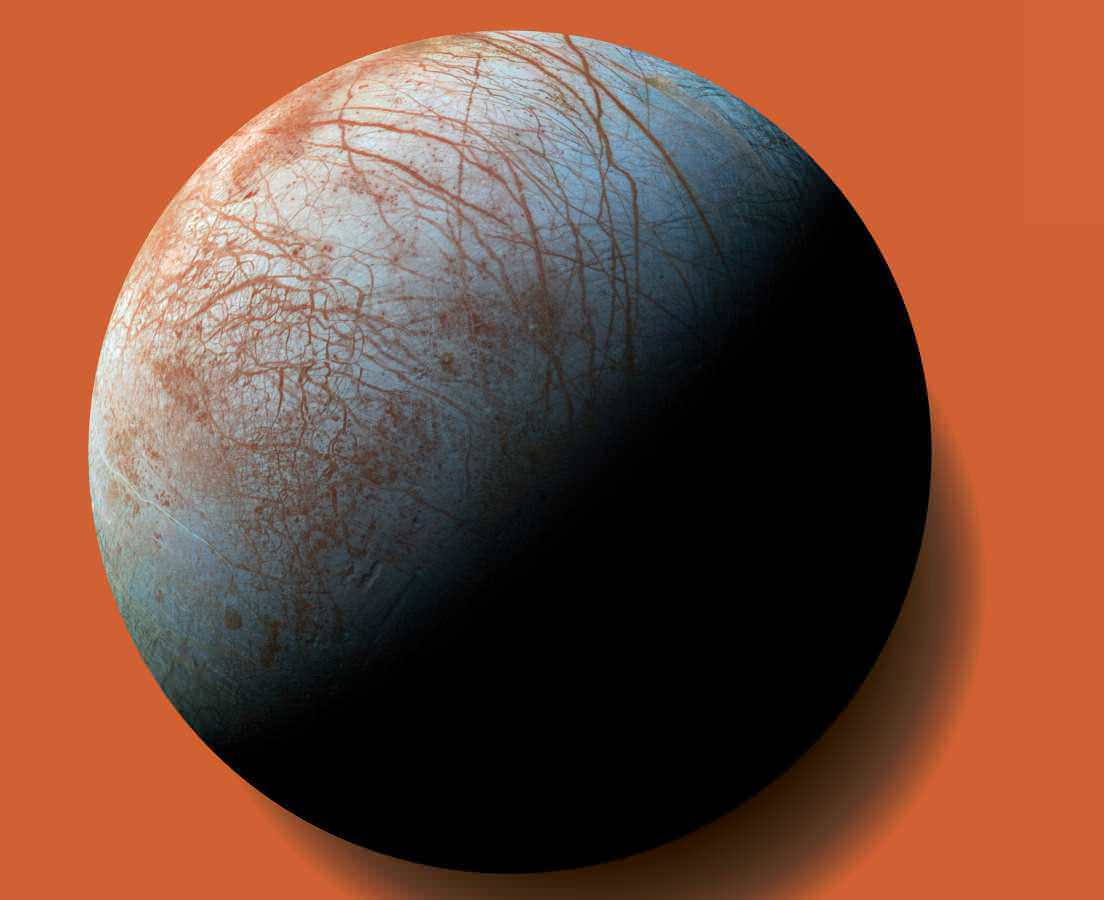 Jupiter's ocean-filled moon might hold the life we've long searched for in space. And scientists have one shot to reach it.

The search for alien life has recently taken a surprise twist away from Mars and toward Europa, an ice ball of a moon in orbit around Jupiter.  To understand why, you just need to look at these three numbers: ZERO, 1.33 BILLION, 3 BILLION

The first is the volume of known water on Mars (sorry,permafrost and billion-year-old riverbeds don’t count).The second is the volume of water on Earth, measured in cubic kilometers. The third is the inferred volume of water sloshing around just beneath Europa’s frozen surface. Sure, Mars may have had oceans billions of years ago, but Europa has them right now—and they are more than twice as large as all of Earth’s oceans combined.

Everything we know about life says that it needs water.Conversely, every place on Earth where water exists, life does too. The conventional thinking, then, is that if you want to find alien life, the first thing you look for is alien water. Europa is the wettest known world in the solar system. Life also needs food and energy. Europa scores there too: Its ocean might be nourished by a drizzle of organic chemicals and stirred by volcanic vents like the ones dotting the mid-Atlantic ridge. If any place in the solar system holds the answer to the “Are we alone?” question, it’s a good bet that Europa, not the Red Planet, does. Which is not to say that getting the answer will be easy—not by a long shot. To give you a sense of exactly how hard it will be, consider three more numbers: 600 million—the average flight distance, in miles, from Earth to Europa, meaning that the journey there could take at least six years; 500—the average radiation dose, in rem per day, on Europa’s surface, enough to fry unprotected spacecraft electronics within a matter of days; and 10—the average estimated thickness, in miles, of Europa’s ice shell,more than four times as thick as the glaciers covering Antarctica. Overcoming those numbers will test the limits of human ingenuity. But a growing chorus of scientists has argued that we must try.

This past May, NASA finally agreed and began the development of a probe to visit Europa sometime in the next decade. Many details of the mission, including its name, are still up in the air. But NASA has selected the nine scientific instruments that will ride aboard the craft to collect data, and Congress has put up the cash to get the potentially $2 billion project underway.

For the Europa faithful, this news has prompted celebratory toasts, along with more than a little giddy disbelief. “We understand how special Europa is. It’s worth the investment. It’s worth the risk,” says Louise Prockter, a planetary scientist at Johns Hopkins University’s Applied Physics Laboratory. Prockter has already made that investment herself, having spent half her career studying Europa’s unique, frosty terrain. “I just hope we can get something there while I’m alive.”

SOMETIMES GREAT discoveries begin with what you do not see. Such was the case when Voyager 2 flew past Europa in 1979. It radioed home images revealing a world as white as a glacier, slashed with enigmatic brown streaks, and utterly flat. “No craters. It just looked like a huge ice pack. That was a big surprise,” recalls Ed Stone, Voyager’s long-serving project scientist. A lack of craters indicated a fast-changing surface that quickly erases the scars of asteroid impacts; that, in turn, implied that there must be some unrecognized energy source driving the activity. We know now that Europa’s gravitational interactions with Jupiter’s other large moons stretch and squeeze its interior, producing frictional heat (akin to rubbing your hands together) and creating a vast, warm ocean. The ice pack is merely frosting on top.