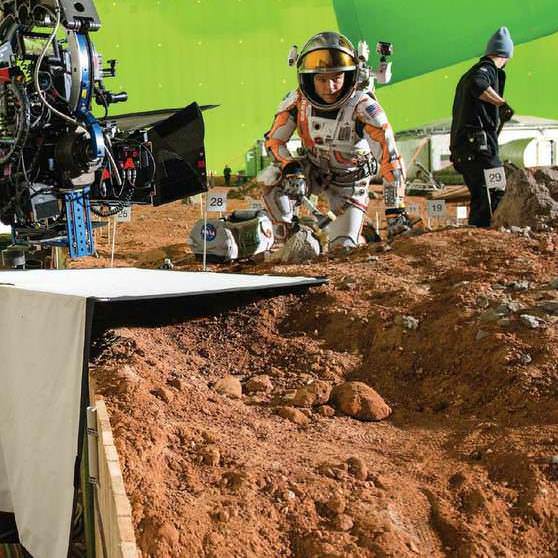 We found the perfect excuse to geek out on exploring Mars - in science fiction and real life. And we invited the director of The Martian to join us.

It’s a big-budget science-fiction film that’s set in space but doesn’t feature aliens, robots, or warp drives. The only villain is Mars itself, and the character who gets stranded there is a botanist (played by Matt Damon). The Martian, which opens on October 2, is about survival through science. To make that believable, director Ridley Scott strove to be accurate. We spoke with Scott and two consultants to his team—NASA’s Dave Lavery and Andy Weir, the author of the book that inspired the film—about how one goes about creating the next chapter in human space exploration.

What was it about The Martian that appealed to you?

SCOTT: I discovered really quietly that I’m a science-fiction fanatic. For many years after having directed Blade Runner, I kept missing it. That’s what made me climb back in with Prometheus. When the phone rang, I was reading Prometheus 2. With The Martian, I was fascinated by what NASA will have to do. You can’t just go to Mars and land and say, “OK, let’s build a house.” You’ve got to get all that stuff up there. In effect, the first astronauts will have to be house builders. And how do you get it there? Do you drop it to the surface in balls and bounce it?

LAVERY: That’s exactly the sort of thing we at NASA are constantly re-evaluating and redesigning as we prepare for the first human missions. Everything astronauts need to survive—from the atmospheric system to forks to eat with—will have to be provided. When you start wrapping your mind around that, you recognize it’s a huge problem.

SCOTT: I guess spending billions to get a few plumbers up there is not very romantic, is it? You better have the water running before you get up there.

LAVERY: Our current thinking is to have the habitat placed and in operation before the astronauts ever leave Earth. Andy gets that right.

Is it challenging to remain scientifically accurate?

WEIR: It’s hard to tell a compelling story and remain true to science, especially if you’re talking about the real space program. Frankly, NASA’s whole job is to keep exciting things from happening—to make sure there’s not a panicked, “Oh my god we’re gonna die” situation. It’s more like: “OK, well, this thing broke. That’s why we have four independent backups.”