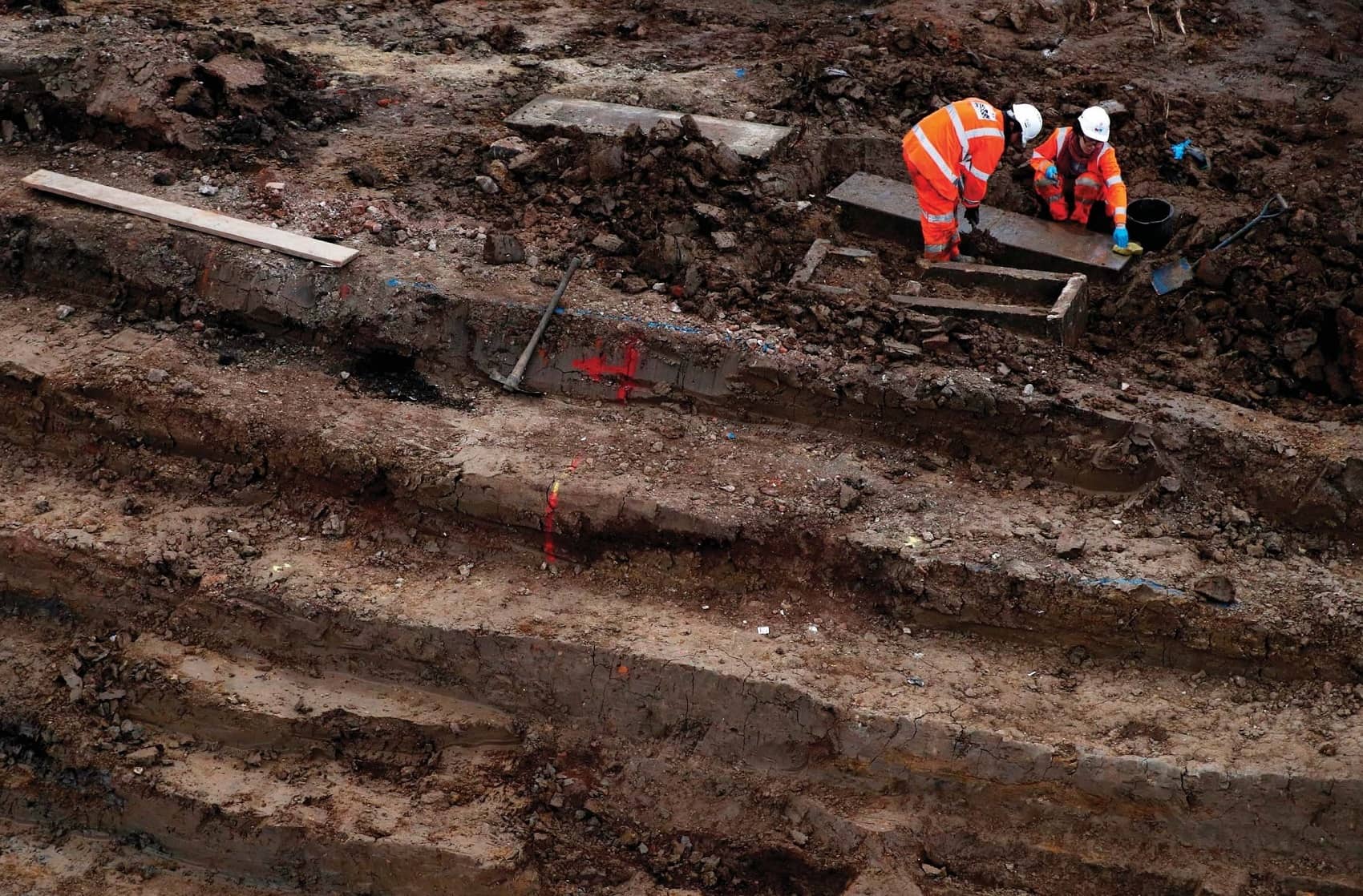 One massive rail project, 10 millennia of history, 60-plus excavations, 143 miles of track, and thousands of skeletons. How a crew of British archaeologists will make sense of their…

MATTHEW FLINDERS IS BARELY FORTY, but he looks seventy. His once dark hair gleams white, his already slight frame skeletal. As a captain in the British Royal Navy, he’s survived shipwreck, imprisonment, and scurvy, but this kidney infection will do him in. Facing death, he finishes writing a book that will change the world as Europeans know it. â€‹Flinders completed the first circumnavigation of the “Terra Australis Incognita,” or “Unknown South Land,” in 1803. A decade later, he compiles his writings, maps, charts, and drawings of the rugged coasts, extensive reefs, fertile slopes, unusual wildlife, and other features of the faraway continent that he suggests naming “Australia.”

His wife places a copy of the freshly printed book, A Voyage to Terra Australis, in his hands as he lies unconscious in their central London home the day before his death in July 1814. Later, he’s interred at St. James’s burial ground, but within a few decades, the tombstone is missing. When the railways at nearby Euston Station expand in the mid-1800s, workers relocate, pave over, or strip graves. Lost in a subterranean terra incognita, the explorer might lie somewhere under track 12. Or 15. Or the garden that’s replaced the cemetery. No one knows.

Today, a bronze Flinders at the station entrance crouches over a map alongside his beloved cat Trim, who also made the trip around Australia. If the statue could lift its head, it would see commuters rushing across the plaza past construction barriers. The hub is expanding again, now as a new terminus of the huge HS2 high-speed rail project, which will connect the capital with points north.

This time, though, a team is carefully exhuming and documenting remains before the tunnel-boring, track- laying, and platform-building begins. They know that Flinders and an estimated 61,000 others were buried here between 1789 and 1853. But, with only 128 out-of-place headstones remaining, they don’t know who they’ll find.

Caroline Raynor, an archaeologist with the construction company Costain, leads the excavation. On a typically overcast day in January 2019, she oversees work beneath what she calls her “cathedral to archaeology,” a white bespoke tent so massive that it could house a Boeing 747. It shields a hard-hat-clad crew of more than 100—and the dead, sometimes stacked in columns of up to 10 as much as 27 feet deep.

Where the London clay is waterlogged and oxygenless, delicate materials survive. Clearing earth by hand and trowel over the course of a yearslong job, Raynor’s diggers uncover bodies wearing wooden prosthetics, as well as the Dickensian bonnets that used to hold the deads’ mouths closed. One man still sports blue slippers from Bombay. Even plants and flowers remain. “Some of them were still green,” Raynor says.

Suddenly, a crewmember runs over with news about a grave fairly near the surface. Very little of the coffin is intact—wood doesn’t fare well in the granular, free-draining topsoil—so there’s nothing to open. A lead breastplate rests atop a bare skeleton: “Capt. Matthew Flinders R.N. Died July 1814 Aged 40 Years.”

The discovery is one small chapter in the saga the HS2 project promises to tell. If the first stage of the $115 billion initiative is fully realized, the train will cut through ancient woodlands, suburbs, and cities along the 143 miles between Birmingham in the north and London in the south—though not before teams like Raynor’s uncover any underground treasures. “It looks like we’re finding archaeology from every phase of post-glacial history,” says Mike Court, the archaeologist overseeing the more than 60 planned digs for HS2 Ltd., the entity carrying out the rail initiative. “It’s going to give us an opportunity to have a complete story of the British landscape.”

With more than 1,000 scientists and conservators involved, the scale of HS2’s excavations is unprecedented in the UK, and perhaps all of Europe. However, it’s hardly an outlier. As development continues to tear through hidden civilizations across the continent, investigations like this are becoming common; in fact, they’re often required by legislation. While researchers once bored trenches exclusively on behalf of museums and universities, many now work on job sites. These commercial archaeologists dig up and analyze finds for private companies like the Museum of London Archaeology (MOLA), a primary contractor on HS2. Because their work is tied to the pace and scale of building projects, their targets are quite random, and discoveries can be boom or bust. Sometimes they’ll unearth just a few graves during housing construction; other times they’ll turn up dizzying amounts of data on battlefields and cemeteries in the path of huge public works. 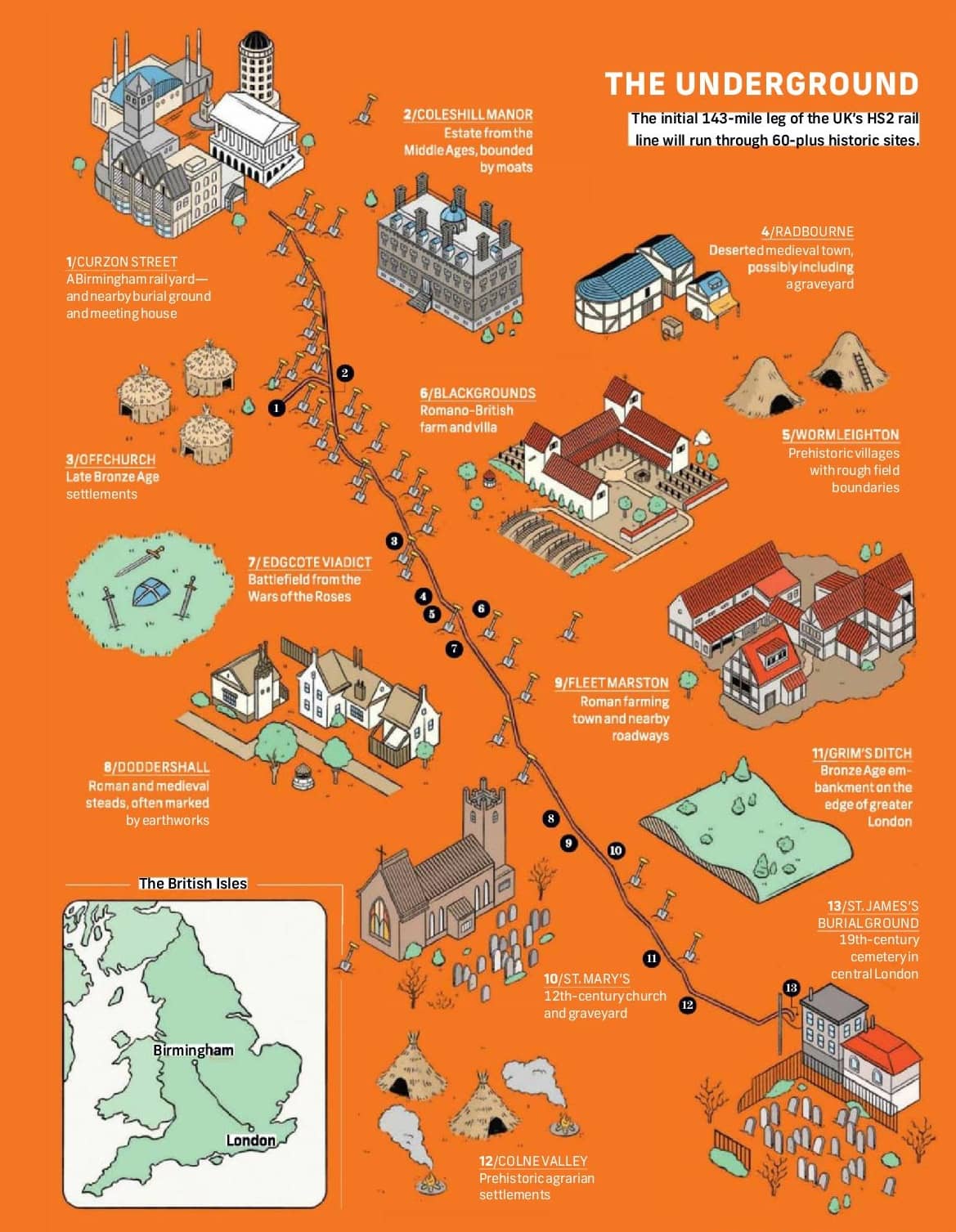