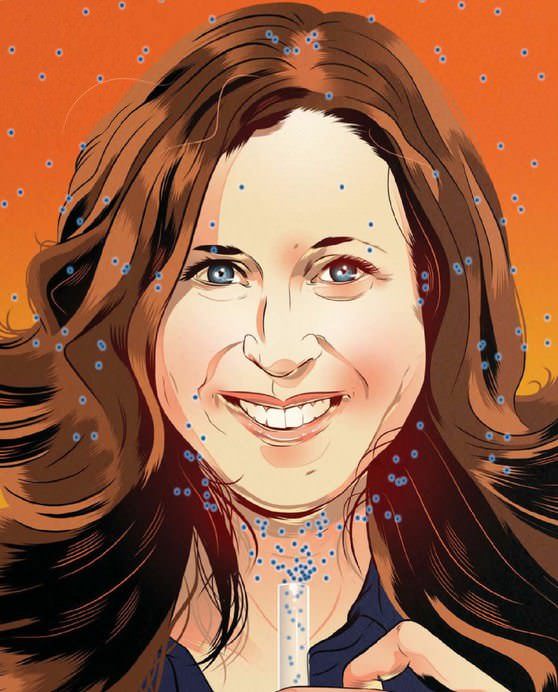 The human body is difficult territory to conquer, even for medicine: Many drugs have to enter the bloodstream, bypass the immune system, and arrive at a precise location within a designated cell. That’s why Kathryn Whitehead, a chemical engineer at Carnegie Mellon University, is searching for the perfect vehicle: a nanoparticle that can shuttle new therapies directly to where they’re most needed.

Whitehead is focused on double-stranded bits of nucleic acid called small interfering RNAs (siRNAs). These molecules can block the production of many proteins that cause disease, and so can potentially treat everything from genetic disorders to viral infections. But siRNAs are unstable and difficult to deliver. While many researchers have tried encapsulating them with nanoparticles, they’ve struggled to find one that works successfully. To identify the ideal delivery system, Whitehead employed a labor-intensive approach: Rather than tweaking the structure of a single nanoparticle bit by bit, she and her colleagues generated 5,000 novel ones, then tested the most promising in mice. “It sounds like a lot of work, and I suppose it was,” she says. But the strategy enabled Whitehead to find nanoparticles she might have otherwise missed. “You just never know what’s going to work well,” she says.

By comparing the successes and failures, the team developed a model to predict the best particles. And they’re now using their top candidate to develop therapies for non-Hodgkin lymphoma—drugs that target only cancer cells with specific mutations, hopefully ridding the body of disease with fewer harmful side effects.

Whitehead credits much of her scientific success to plain old perseverance; her lab’s mascot is the honey badger, an animal known for its determination. “People look at me like I’m crazy when I say I tested thousands of materials,” she says. “I think some others would have given up.” 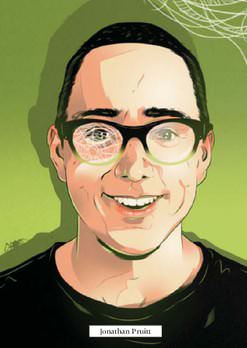 Jonathan Pruitt’s typical workday involves hours spent crouched in deserts and forests, observing the social lives of colony-building spiders. Like people, certain arachnids have different personalities—some are docile, some are aggressive—and Pruitt, a behavioral ecologist at the University of Pittsburgh, studies how these social traits affect survival. His findings provide the first evidence that individuals in the wild sometimes sacrifice their own genetic survival for the sake of the group—a topic of hot contention among biologists for 40 years.

Life as a spider is risky. Each year 60 to 90 percent of colonies collapse. “It’s death, death, death—little carcasses blowing in the wind,” Pruitt says. But he found that a colony’s survival isn’t purely a crapshoot: It depends on the ratio of docile to aggressive spiders. Colonies that have ample resources require more aggressive spiders to protect them, while colonies with few resources fare better with more docile spiders that don’t waste energy fighting each other. If the ratio isn’t optimal, individual spiders will adjust it by sabotaging their own offspring. Those spiders with an undesirable trait will lay fewer eggs—ensuring that the group endures even at the expense of their progeny.

Though evolutionary models suggested that such group selection must be occurring, no one had found solid proof. Many claimed looking for it was a waste of time. Having proved the skeptics wrong, Pruitt is now looking for other situations where group selection matters. The search has implications far beyond a single species. “If we can show that this is a robust result that we get in other systems,” he says, “we can improve our understanding of how societies work.” 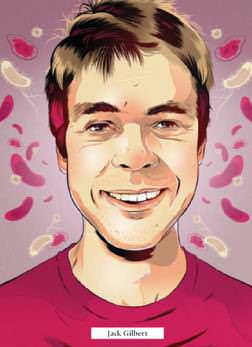 Changes the World One Microbe at a Time / Age : 38

Jack Gilbert wound up in microbiology because of ice cream. A food company hired him to look for substances to make frozen desserts smoother, a task that involved studying Antarctic bacteria. “It was a really noble cause!” he jokes. Now a microbiologist at Argonne National Laboratory and the University of Chicago, Gilbert samples bacteria from all kinds of ecosystems—both indoor and out—in order to better understand the unique roles they play. “I want the research I do to impact the way we manage the planet,” Gilbert says.

In the pursuit of that goal, Gilbert’s projects tackle problems as diverse as water treatment, crop productivity, and human disease. For example, he recently figured out why gut bacteria become more virulent after surgery—they lack phosphate, so giving patients phosphate can prevent post-surgical infections. Gilbert also found that people’s homes take on the microbial signature of their bodies within 24 hours. He has a hunch those microbes can help repopulate the gut after a person has taken antibiotics.