Oneplus 7 Pro: The Best Value For A Premium Smartphone

With the OnePlus 7 Pro, this smartphone maker continues its trajectory as a swiftly rising flagship killer. Not only is this the fastest Android phone we’ve ever tested, but it’s also loaded with a gorgeous, notchless screen; cool hardware; and smart software features that outpace even those of the Samsung Galaxy S10+.

If you’re looking for a big, powerful Android phone (especially if you’re with T-Mobile), the OnePlus 7 Pro is an obvious pick and our Editors’ Choice.

There are three versions of the OnePlus 7 Pro: 6GB of RAM and 128GB of storage for $669, 8GB and 256GB for $699, and 12GB and 256GB for $749 (the latter two sold by T-Mobile). The phone comes in blue or gray. Two other models of the OnePlus 7 series will be released, but the 7 Pro is the only one we’ll see here in the US. The regular OnePlus 7 is for more price-sensitive countries (the company is very popular in India), and the OnePlus 7 5G is for countries with 3.5GHz 5G networks (which we don’t have in the US).

At 6.4 by 3 by 0.34 inches (HWD) and 7.26 ounces, this is a big phone. It’s not actually larger than, say, a Galaxy Note, but anyone who’s read my reviews knows I’m an aficionado of smaller models because I can spend hours a day standing up holding a subway pole with one hand while trying to use my phone with the other. This phone feels large and a bit slippery to grip to me.

From the front, the phone almost looks like a Samsung, with its curved OLED screen, until you realize there’s no notch—just a lot of screen. The selfie camera pops up from a little cutout on the top of the phone, so even that doesn’t take up screen space. It also has a ribbed mute switch that has appeared on OnePlus phones for years. There’s still no headphone jack or microSD slot, if those things matter to you (though OnePlus separately sells the excellent $19.99 Type-C Bullets).

Our 7 Pro test unit is a shimmery blue. The phone’s glass back is slightly slippery, with a smooth, cool feeling to it, and it scratches easily. The phone comes with a clear case in the box, which you should apply as soon as you get it. In addition to providing protection, the case also makes the body much grippier. 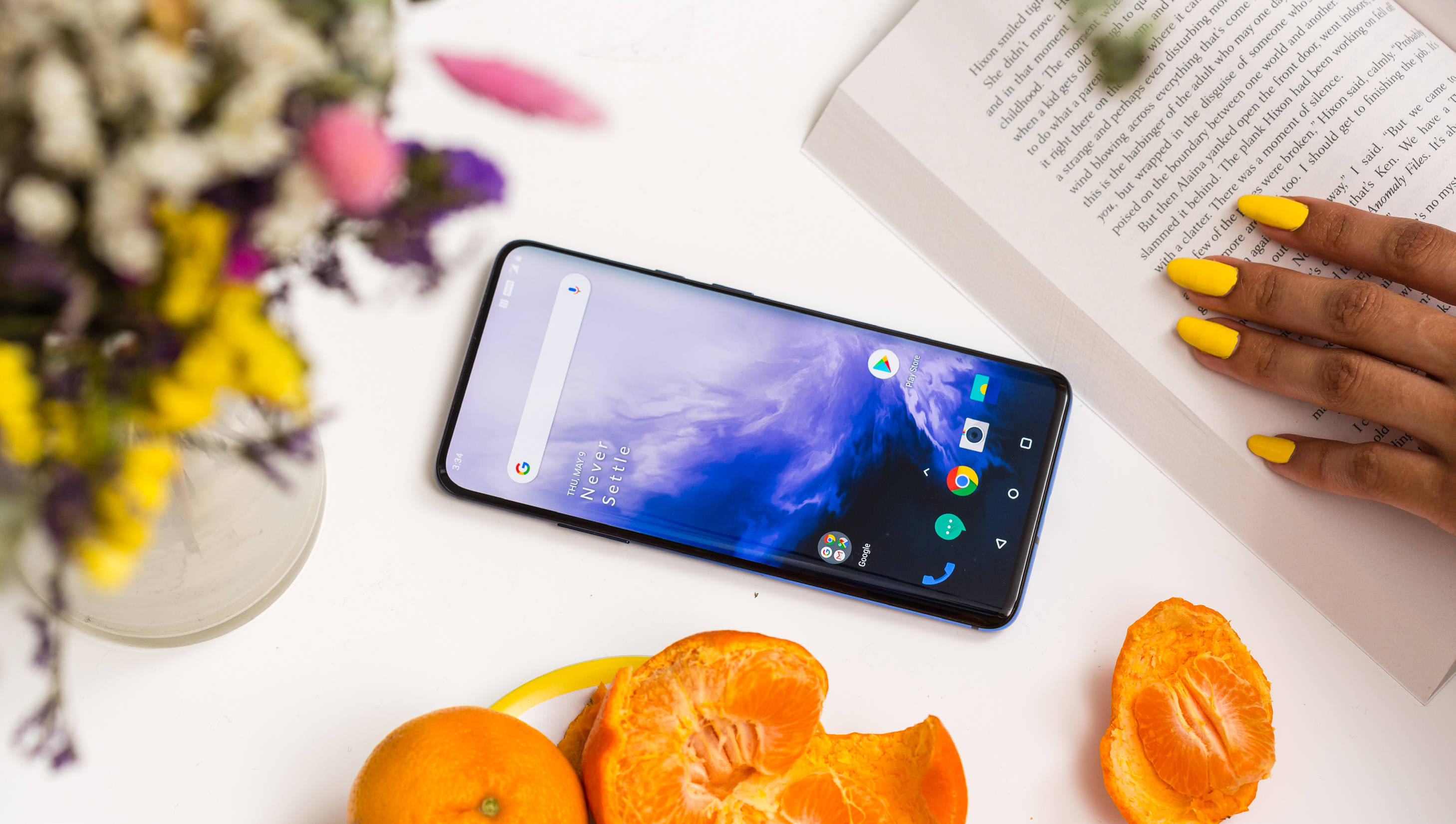 OnePlus keeps trying to ride a line where it makes its phones sort of waterproof, but it doesn’t pay for IP certification. I dunked and washed the phone rather than soaking it for an extended period of time. Some condensation appeared inside the pop-up selfie camera, and the microphone was messed up for about an hour, but after a few hours, the phone was perfectly fine.

The 6.67-inch, 3,120-by-1,440- resolution screen is a Samsung OLED panel tuned to OnePlus’s specifications, and it’s comparable with the Galaxy’s (and far better than, say, the Google Pixel 3’s). I tested the screen’s colors and brightness with a Klein K-80 colorimeter and Portrait Displays’ CalMAN and MobileForge software.

The big innovation here is the 90Hz refresh rate. In its standard UI, the OnePlus 7 displays 1.5 frames for every one frame most other phones do, resulting in what appears to be smoother scrolling. Whether you can perceive this depends on what you’re used to. PCMag Hardware Analyst Chris Stobing, a PC gamer who uses high-refresh-rate gaming monitors, noticed it instantly; it took me a lot longer to see it. Over time, the high refresh rate should mean less eyestrain.

Higher refresh-rate scrolling takes more battery power, but the OnePlus 7 deals with this intelligently by reducing the refresh rate when you’re watching lower-frame-rate content, such as 30fps videos. It actually isn’t clear to me (and OnePlus couldn’t help) whether the 90Hz applies outside the general UI. Our GFXBenchmark graphics benchmark topped out at displaying 60 frames per second, which may be a limit in the Android APIs. Razer, which also sells a high-frame-rate phone, had to write special extensions to get games to run at higher frame rates.

I’d dare say this phone’s in-display fingerprint sensor is the best one on the market. While it’s optical and not ultrasonic, it seems to have a slightly larger target area than Samsung’s sensor does (it’s 36 percent bigger than the one on the OnePlus 6T), and it recognizes my fingers very quickly. Your fingertip still has to be dry and clean, though; a wet finger reduces recognition to about 80 percent reliability.