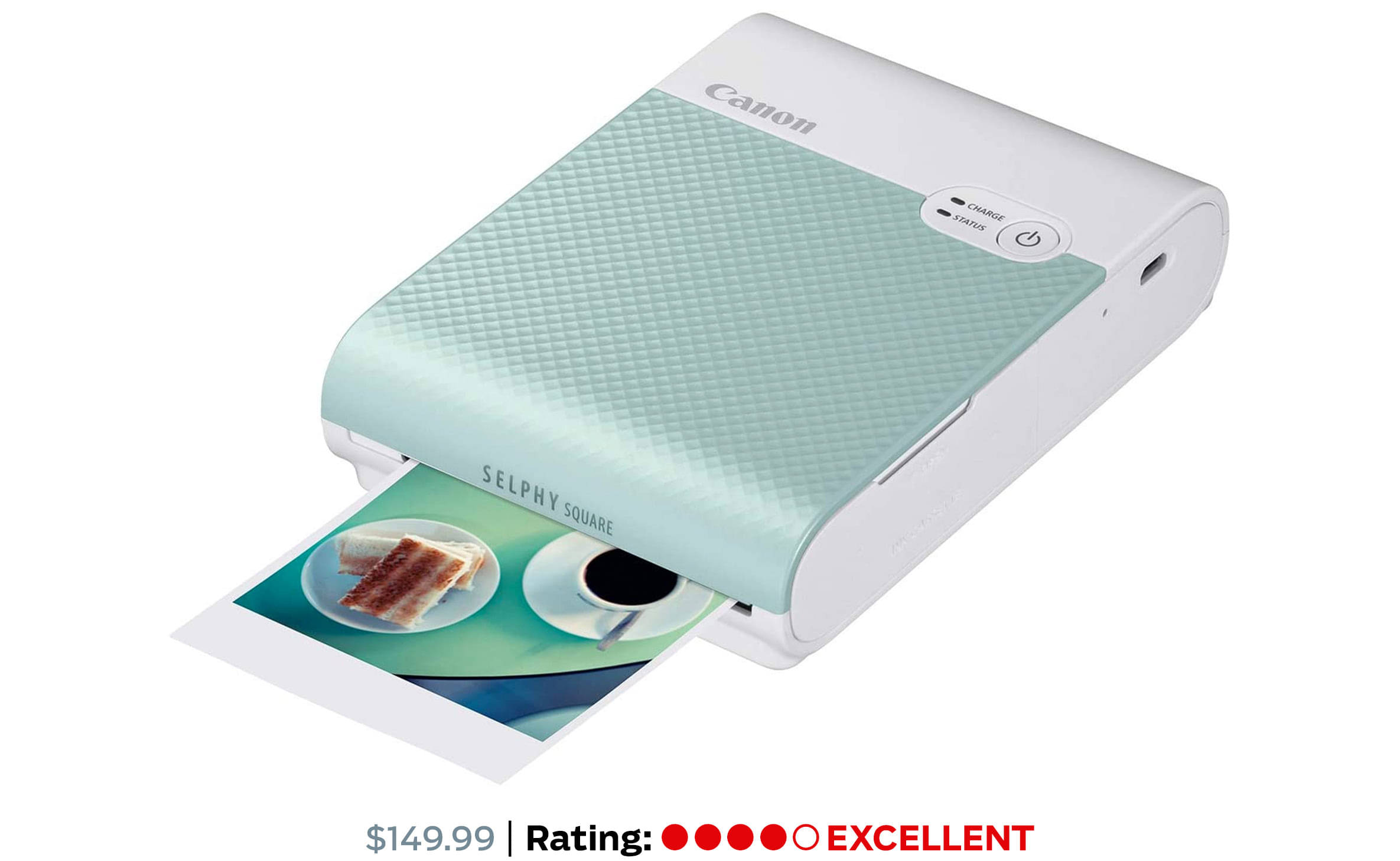 The Canon Selphy Square QX10 is a departure from the company’s CP1300 Wireless Compact Photo Printer and earlier Selphy models. This photo printer is smaller and lighter than those other Canons, and it’s closer in functionality to the Editors’ Choice HP Sprocket Select or Canon’s own IVY Mini Photo Printer, though it’s still too big to be pocketable.

But the primary difference between this Selphy and many of today’s portable photo printers is in the print technology it uses. Instead of inkless Zink (“zero ink”) tech, the Selphy Square deploys a much more mature process called dye sublimation (a.k.a. dye-sub), in which a carrier ribbon is heated and transfers dye to special paper—in this case, Canon’s XS-20L square photo stock. The prints look great, a little brighter, and more vibrant than many Zink models we’ve tested. And the photos should last considerably longer, according to Canon, resisting fading for as long as a century.

Measuring approximately 1.2 by 4 by 5.7 inches (HWD) and weighing about a pound, the Selphy Square QX10 is about twice as thick as the HP Sprocket and weighs about twice as much. It’s also a tad bigger than Canon’s IVY Mini Photo Printer, Lifeprint’s 2x3 Hyperphoto Printer, and Kodak’s Mini 2 HD Instant Photo Printer. (The last is another dye-sub unit.) While heavier than most Zink models, it comes in at about two pounds less than the Selphy CP1300. The chassis has a built-in battery for mobile use.

Like most of its Zink-based competitors, the Square has no control panel to speak of. Instead, you get a power button and two LEDs (one for a charge, one for status).

All operations are handled via a downloadable Android or iOS app, Selphy Photo Layout 2.0. The app allows you not only to print your photos, but also to edit and enhance them, or embellish them with text, frames, and other types of clip art and shapes.

Rather than printing on Zink chemical-infused paper (which releases various colors based on heat patterns from the printhead), each Selphy Square paper packet comes with a dye-sub cartridge with enough dye-sub carrier rolled inside to cover each sheet of paper in the pack. The printer comes with a USB charging cable and a 10-pack of paper and ink.