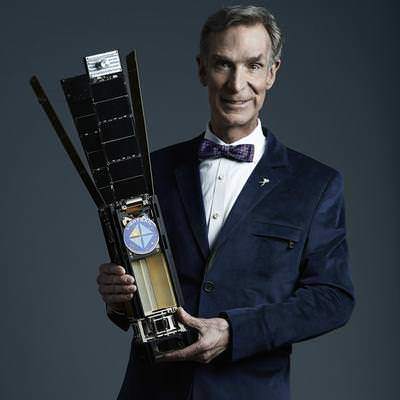 Bill Nye. If you grew up in the 90’s, your brain will automatically recall the words “The Science Guy” – and maybe even the iconic show’s theme song. Bill hasn’t missed a step since his days teaching kids about the earth’s crust, how light works, and so much more. For starters, he’s the CEO of the Planetary Society, which was co-founded by his former teacher, Carl Sagan. He’s taken on the anti-science mongers of the world in interviews. His next book, Unstoppable (out November 10), not only describes him, but tackles what he sees as the biggest problem facing humankind: global warming and those who deny it. On #TuesdaysWithBill, he hits the Twitter-verse with no-nonsense answers to the world’s science questions.

Nye’s sense of humor, intelligence, and willingness to discuss tough issues make him a hit with millennials nationwide and a favorite among USA Science & Engineering Festival attendees. The 18-time Emmy winner has wowed fans since the Festival’s inception, and is projected to attract some of the largest crowds at the 4th Festival on April 16-17 in Washington, D.C.

In this exclusive interview, Nye shares his views on just about everything under (and including) the sun.

Innovation & Tech Today: Why are events like the USA Science & Engineering Festival so important?

Bill Nye: Well, the big thing we all talk about continually is hands-on learning. You want kids to be able to touch things – not just watch them. Everybody agrees: it is important to give students an opportunity to really touch things and really see things. All of our technology and our food and our weather reports – everything comes from a relatively disease-free society compared to a hundred years ago. That’s all a result of science, so of course you want to get kids excited about that. But also, from a practical standpoint, you get to get kids excited about engineering jobs.

If you’re a corporation like Lockheed Martin who has a strong presence there, you have to get engineers in the pipeline, too. You gotta get kids excited about science and engineering so you can hire them as employees someday.

I&T Today: I think another point about the USA Science & Engineering Festival people talk about is the importance of kids having role models and seeing people who are really happy in their jobs. Do you think experience combats the stereotype that it’s uncool to be a geek?

BN: Yes. The strongest evidence I can think of is The Big Bang Theory. It is the biggest TV show on television – not just the biggest sitcom, but it has the highest ratings all week. They’re all lovable geeks! That alone is incontrovertible evidence that it’s hip to be a square.

I&T Today: What are the biggest obstacles to getting kids in STEM?

BN: It turns out algebra is the single most reliable indicator of whether or not a kid pursues a career in science or math. It’s not clear that it’s cause-and-effect, but what we want to do is start teaching algebra earlier and have it be lower pressure. Traditionally it’s taught in middle school, and either you like it and get into it, or you hate it and no one ever makes you do it again. We want everybody to be fluent in algebra. It’s a solvable problem. You do not need to scrap the entire school system. It’s a tweak to enable science technology engineering and math for a better tomorrow for all of humankind. Is that so wrong?!

When you have a space program, you do not have to run around obsessing about creating STEM! STEM! STEM! STEM just happens as part of your everyday experience.

I&T Today: And that’s really closely related to the project-based learning you hear a lot of buzz about, too.

BN: We love project-based learning. That’s also the hands-on learning. You want to build a robot? That’s all you.

I&T Today: And then the math and science is something that you learn so you can do something really awesome like building a robot instead of just passing a test.

BN: Yeah, exactly. This is part of the theater background, but I remind everybody, it’s test time! You nervous? Yes, you’re nervous. And before a show you’re nervous. As the saying goes, if you’re not nervous, quit doing it. When you teach people, remind everybody to take the nervousness and turn it into excitement. Not saying, WOW! A pop quiz! Cool! But just, Well, a pop quiz. Okay. Time to focus.

I&T Today: What’s the importance of adding the “A” in STEM and making it STEAM?

BN: When you do that, you diffuse it a little bit. You don’t want to eschew the arts. They’re very important. You know, I was just in Japan (recently), and it’s a real thing – when Japanese society does anything, they take into account how it looks. And why don’t we all do that? Japanese companies want U.S. students engaged with their students, because it is generally agreed U.S. students are somewhat more creative. They also want U.S. students to see disciplined Japanese science students doing disciplined things – not just dinking around. Toshiba has an exchange program. It’s called Tomodachi, which means friendship. The better you know your neighbors the more likely you’ll do business with them, and then more productive and creative everyone will be, the better the world will be tomorrow.