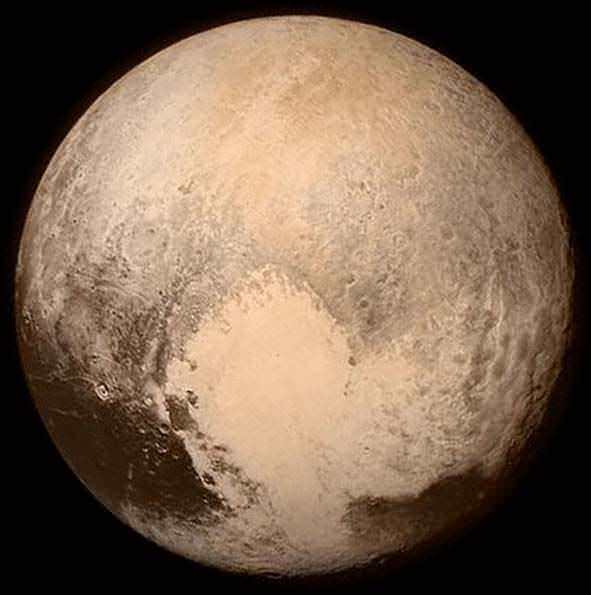 Initial images and data from the NASA spacecraft New Horizons recent rendezvous with Pluto point to a surprisingly craterless mosaic of relatively ancient regions and very young places on the dwarf planet.

REMINISCENT of the famous Raja Ravi Verma painting in which Shakuntala while pretending to remove a thorn from her foot is surreptitiously looking at her lover Dushyantha, the National Aeronautics and Space Administration’s (NASA) New Horizons spacecraft took a last peek at Pluto from a distance of 5.7 million kilometres in the wee hours of July 19 and brought to closure a week full of anticipation and excitement.

New Horizons, launched about nine and a half years ago, made its closest approach of Pluto on July 14 while cruising at a record speed of 58,500 kmph after travelling about five billion kilometres. At the time of the closest approach, 17:19 hrs IST (11:49 UTC [Coordinated Universal Time]), as the spacecraft passed 12,500 km above the surface of Pluto, a set of seven scientific instruments aboard the craft hungrily gathered data on the faraway world of Pluto and its five known moons.

This was the first ever foray by any space mission into the Kuiper Belt, the so-called “third region” beyond the terrestrial inner planets and the gaseous outer planets, swarming with teeny-weeny icy objects. New Horizons has indeed taken a cosmic step and as data from it, with tantalising images and surprising implications about Pluto and its five moons, begin to trickle in, our understanding of the weird world is all set to change radically. As one blogger opined, it is time to tear and throw away chapters on Pluto from every book that has ever been published. The world that the New Horizons mission paints is not at the perspective we had until now. We had known all along that Pluto was weird, but it is weirder than we imagined.

Since its fortuitous discovery in 1930 by a 24-year-old farm boy–turnedastronomer, Clyde Tombaugh, Pluto has kept its secrets to itself: it has been an odd ball. Smaller than seven moons in our solar system, including our own moon, orbiting the sun at an astounding distance of 5.9 billion kilometres, a distance to which light would take five and a half hours to reach, Pluto was just a hazy grey blob through even the best of telescopes, hardly revealing any surface feature. As Pluto’s thin extended atmosphere came in the way, even determining its size was a challenge.

The discovery of its largest moon, Charon, in 1978 forced astronomers to revise the estimates of Pluto’s size. Previously, as Charon remained unknown, its mass was also attributed to Pluto. Two smaller moons, Nix and Hydra, were discovered by the sharp-eyed Hubble Space Telescope. A search for rings around Pluto by Hubble resulted in the discovery of Kerberos in 2011. The last of the known moons, Styx, was discovered in 2012 in the wake of the search for potential hazards for the New Horizons mission.

Pluto does not belong either to the rocky compact terrestrial inner planets (Mercury, Venus, the earth and Mars) or to the outer gas giant planets (Jupiter, Saturn, Uranus and Neptune). While the orbits of all these eight planets lie on a plane, Pluto’s orbit is tilted by about 17 degrees and is more elliptical than any other planet’s. The highly elongated orbit at times comes inside the orbit of Neptune. 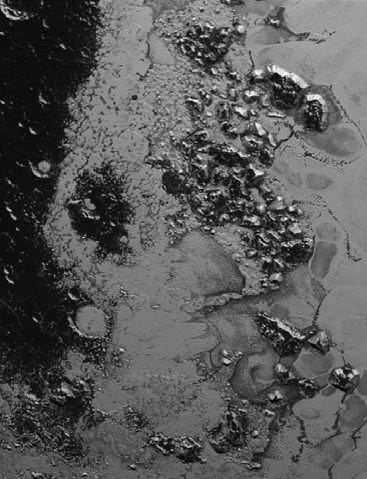 Pluto does not belong either to the rocky compact terrestrial inner planets (Mercury, Venus, the earth and Mars) or to the outer gas giant planets (Jupiter, Saturn, Uranus and Neptune). While the orbits of all these eight planets lie on a plane, Pluto’s orbit is tilted by about 17 degrees and is more elliptical than any other planet’s. The highly elongated orbit at times comes inside the orbit of Neptune.

At the time of its discovery, Pluto was celebrated as Planet-X, but as more and more information on it and its environs became available, astronomers were not comfortable about classifying it along with the other eight planets. Beyond the orbit of Neptune, in the Kuiper Belt, astronomers have discovered more than 1,300 Pluto-like celestial objects. In 2006, the year New Horizons was launched, the International Astronomical Union (IAU) decided that Pluto was not a full-blown planet and demoted it to the status of a dwarf planet, one among the estimated 7,00,000 objects in the Kuiper Belt.

What does it take to be a planet? The IAU has codified that the object must orbit the sun and be massive enough to assume “hydrostatic equilibrium”, that is, it should be spherical in shape. Further, crucially, it should have “cleared the neighbourhood” around its orbit. The first two criteria are simple and common sense, and the third has to do with our understanding of the evolution of planets not only around the sun but also around other stars. As a planet evolves, initially in an accretion disc around the proto-star, it gathers most of the materials in its orbit and grows in size or nudges the remaining away from its orbit.

Although Pluto goes around the sun and is nearly spherical, it is not the dominant body in its orbit. It possesses only 0.07 times the mass of the other objects in its orbit. Sure, other bodies are strewn along the earth’s orbit, but the mass of the earth is 1.7 million times the remaining mass in its own orbit. This implies that Pluto has not “cleared its neighbourhood” adequately. Such midway objects are classified by the IAU as “dwarf planets” and Pluto is the largest known so far.