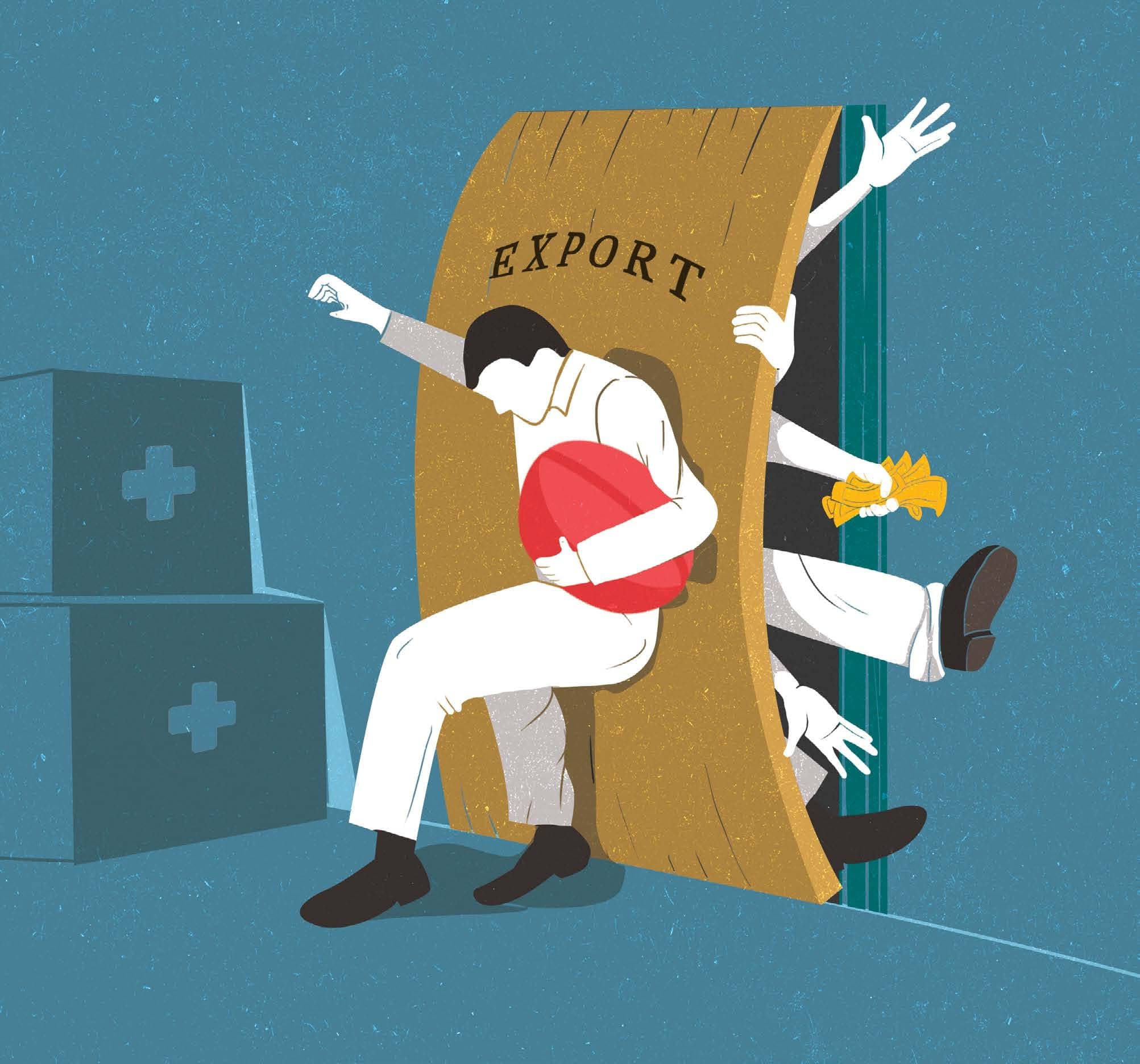 The pandemic has exposed a serious fault line in the global pharmaceutical supply chain, created by an industry that flourished by putting profit before public health. Amid shortage of life-saving drugs, countries now scramble for self-sufficiency. But circumventing market dynamics may not be easy

In February-end, when the United States confirmed 60 cases of the coronavirus disease (COVID-19), President Donald Trump dismissed it. “This is like a flu,” he said. Within weeks, the US had 0.2 million cases and the number of deaths crossed that of the 9/11 terrorist attacks in 2001. A grim-faced Trump now called the contagion “vicious” and to tackle the unprecedented crisis, the US scrambled to get life-saving medical supplies by hook or by crook. In India, Tamil Nadu had ordered 0.4 million rAPId test kits from China to tackle a sudden spurt. The consignment was to reach the state on April 9, but Washington, in all likelihood, put pressure on Chinese manufacturers and the kits were swiftly diverted to the US.

Like the US, all nations are scurrying for medical supplies and they are ready to play dirty. With close to 3 million people hit by COVID-19 globally and over 0.2 million dead, pharmaceuticals have turned out to be the most vital sector. It’s about national security, say countries, and each wants to reduce its dependence on foreign supplies. On March 25, for instance, when the coronavirus, sars-Nov-2, was spreading rAPIdly, the European Union included health, medical research and biotechnology as part of its “restrictive list” of foreign investment. Italy was then the worst affected after China and begged EU member nations for face masks. Instead of offering help, Germany and the Czech Republic promptly banned the export of masks and other protective equipment. Germany intercepted a truck, on way to Switzerland with 240,000 masks, before it left German soil. Turkey and Russia followed suit.

As deep cracks aPPEared in the global supply chain of masks, personal protection equipment (PPE), testing kits, drugs and ventilators, this has triggered infighting within countries. In the US, the federal government has seized masks, thermometers and other essentials ordered by different states. In France, the government has requisitioned all available masks for its own use. Israel has deployed its intelligence agency, Mossad, to take control of all ventilators in the country. Worldwide, there is a demand for at least 880,000 ventilators. Germany has 25,000 ventilators with 10,000 more on way, but the country is unwilling to share it. NITI Aayog on April 3 estimates that India would need 27 million N95 masks, 15 million PPE, 1.6 million diagnostic kits and 50,000 ventilators within two months.

India has further been pushed into the eye of the storm with experimental drugs like hydroxychloroquine (HCQ) becoming part of the politics. As stocks of active pharmaceutical ingredients (APIS)—basic therapeutic chemicals that act as raw materials for producing tablets, capsules and syrups—dwindled globally, India put 13 APIS, also called bulk drugs, and their formulations on the restricted list for exports on March 3 and then banned their export on April 4. These accounted for 10 per cent of India’s total pharma export.

The anti-malarial HCQ was part of the list. But India was forced to lift the ban on humanitarian grounds. The US, in fact, threatened India with retaliation. On April 6, India’s Directorate General of Foreign Trade (DGFT) had to permit the export of APIS and formulations made from them. Export of formulations made from paracetamol were also allowed, though DGFT continues to restrict the export of the API for paracetamol. This medicine for fever is part of the arsenal to provide relief to covid-19 patients.

The pharmaceutical industry has developed in a way that makes every country vulnerable during the crisis, says Ashok Madan, executive director of Indian Drug Manufacturer Association. As every country scrambles for medical essentials, it has enormously strained the global supply. At the same time, the scramble has also exposed a faultline in the global supply chain, created over the years by an industry that has flourished by putting profit before public health. With the bulk of the production of pharmaceuticals and medical essentials occurring only in China and India, global reliance on these countries is overwhelming.

BIGGEST DRUG PROVIDERS TO THE WORLD LOCKED DOWN

According to the UK’s Medicines and Healthcare Products Regulatory Agency, China manufactures around 40 per cent of all APIS used worldwide although the World Health Organization (who) puts this figure at 20 per cent. The China Chamber of Commerce for Import and Export of Medicines and Health Products says the export value of Chinese APIS in 2018 was US $30.48 billion and the export volume reached 929.72 million tonnes.

The reason for Chinese supremacy in API manufacturing is because when the sector first developed in China, it was state-owned. The government strategically supported the industry and gave them incentives such as cheap electricity, water and labour, negligible financial costs and no charge on land; it also established special industrial zones. “In the late 1980s, when global corporations started shifting their production base to developing countries, their interest was to get cheap labour and raw materials in an effort to maximise the benefit,” says KM Gopakumar, legal advisor and senior researcher with Third World Network, an international research and advocacy organisation. China emerged the winner and managed to kill India’s existing pharmaceutical sector. “For example, China dumped cheap Penicillin G in India, outperforming Indian manufacturers like Hindustan Antibiotic in the public sector and Torrent Pharmaceuticals Ltd, Alembic Pharma, Southern Petrochemical Industries Corporation Ltd and JK Pharmachem in the private sector,” explains Madan of the Indian Drug Manufacturer Association.

With the pandemic, China had to lock down its production hub in Hubei province, which hit hard its supply to the world. The region has 44 companies which are either approved by the US Food and Drug Administration (FDA) or meet EU standards. These units have been shut since January 24.

THE REASON FOR CHINESE SUPREMACY IS THAT GOVERNMENT SUPPORTED THE INDUSTRY AND GAVE INCENTIVES SUCH AS CHEAP ELECTRICITY, WATER AND LABOUR; IT SET UP SPECIAL INDUSTRIAL ZONES TOO