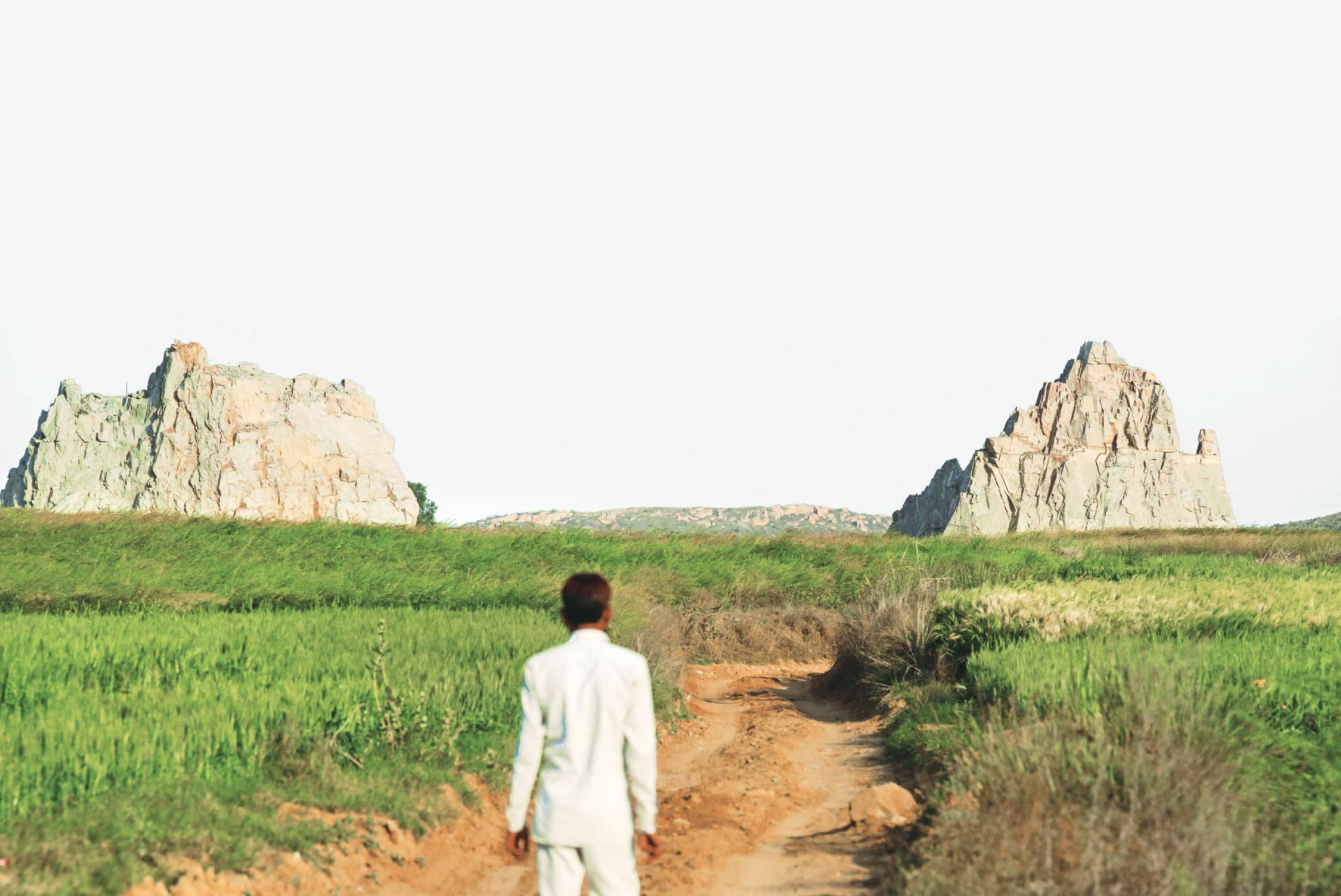 The Aravalli mountain range extends for more than 692 km from Champaner in Gujarat to Delhi and beyond. Its role in defining the shape of the Indian subcontinent and its climate, and the fact that it triggered the explosion of multicellular life, are under-appreciated. The rugged mountains guide the monsoon clouds and protect the fertile alluvial river valleys from the assault of cold westerly winds from Central Asia. However, over the past four decades, the world's oldest mountain range has been destroyed by mining, deforestation and over-exploitation of its fragile and ancient water channels

IF YOU were an alien or a space traveller some three billion years ago (it is possible to imagine this in the current political climate), the only discernible feature you would have seen—which defined the northern margins of the landmass we call India—would have been the Aravalli mountain range. It took nearly two billion years (3.2 to 1.2 billion years ago) of shoving and pushing of tectonic plates and magma outpourings to create these oldest fold mountains in the world.

Since then, these mountains have endured millions of years of sustained assault of lava flows, submergence by seas, uplift by force of gushing magma from the depths of the Earth, collision with landmasses and erosion by wind and rain. But the Aravallis now struggle to survive the greed, pettiness and the extreme short-sightedness of politicians and corporations.

Starting from its south extent, the Aravallis begin their 692 km expanse from Champaner and Palanpur in Gujarat as small denuded hills. The peaks reach their maximum height in the south-western segment, with some rising more than 1,000 m (like the 1,722 m-high Guru Shikhar near Mount Abu and hills around Udaipur). As we move north, the range begins to taper and the hills become modest. By the time the Aravallis reach Delhi, they get inundated under a swathe of young alluvium, only rising occasionally as hillocks like the Raisina Hill, upon which rest the powerful government offices, the North and South Block. The northeastern part of the Aravallis upon which Delhi sits has an average elevation of 400-600 m. 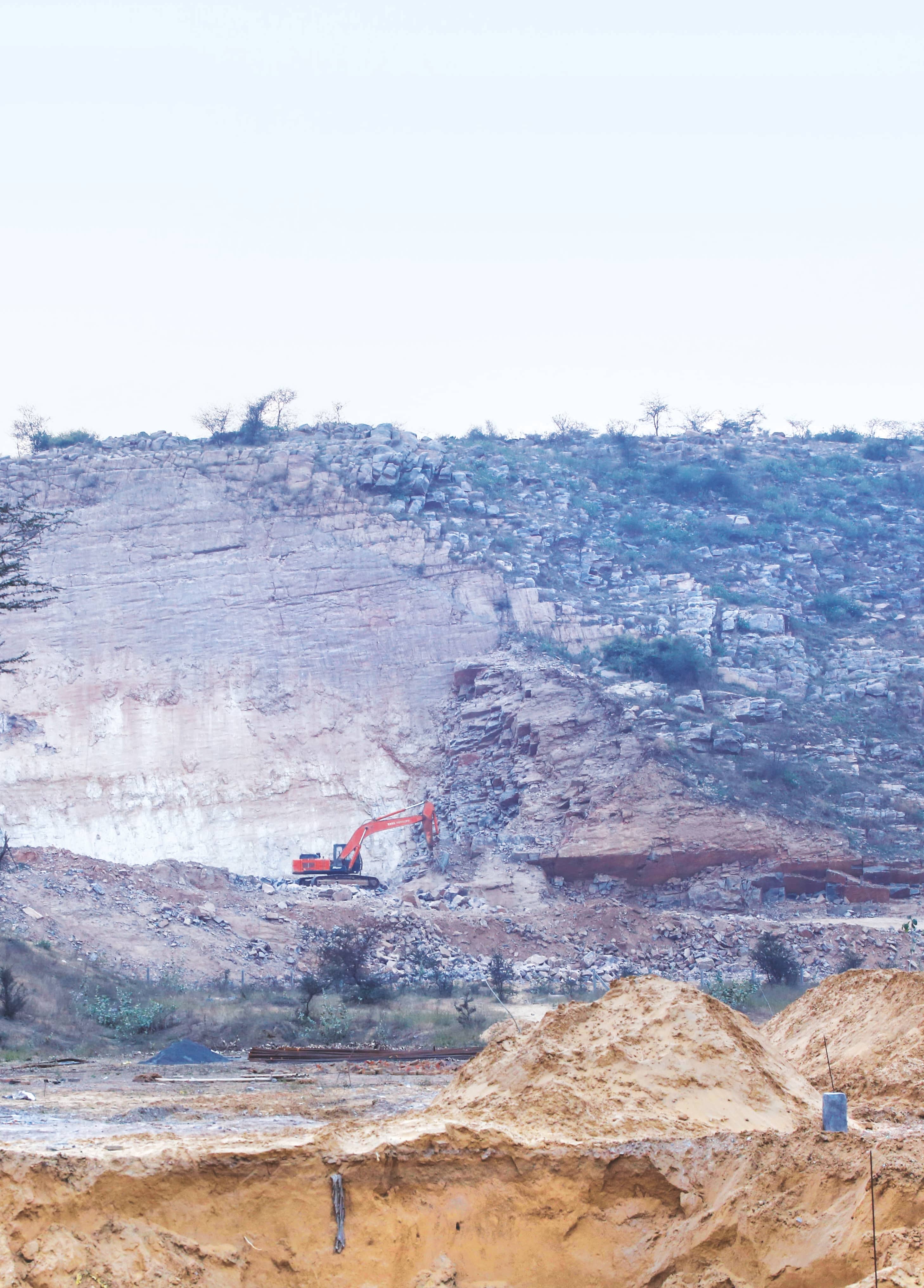 But the range does not end there. It travels beyond, but this time under the ground right up to Haridwar after which it disappears. The solid, often impervious, underground rocks of the Aravallis make it a defining geologic and geographic feature. The hidden limb of the Aravallis that extends from Delhi to Haridwar creates a divide between the drainage of rivers of the Ganga and the Indus (Sindhu, to stay politically correct).

The Aravallis are assembled over a very large province of granite (called the Bundelkhand craton; a craton is part of Earth’s crust which has been stable for nearly a billion years or so) and gneiss (pronounced “nice” which is typically a hard, grey rock with long, white or grey ribbonlike bands). The gneiss and granite hills pop up east of Dungarpur, Udaipur, Nathdwara, Bhilwara, and end close to Ajmer. Granite (and all stone mining) is unorganized and is left to the mercy of unscrupulous leaseholders. They extract these gorgeous rocks until none is left, and desert the landscape gouged and ravaged. Each granite that is mined bears the name of the district, the color or an epithet like Pale White Pali, Imperial Pink Jalore, Merry Gold (sic) Barmer, among others, and adorn homes, corporate, hotel and airport lobbies.

Over the next several hundred million years, other rocks gradually assembled above and around this gneissic province. These included new and younger varieties of granite, marble, quartzite (the dominant rock in Jaipur and Delhi), sandstone, rhyolite (a gorgeous smooth volcanic rock) among others. The Aravallis provided the perch and the raw material for local feudal lords to create dynasties by building formidable forts and places of worship, and have contributed to the rich historical and cultural contour of the subcontinent’s history. 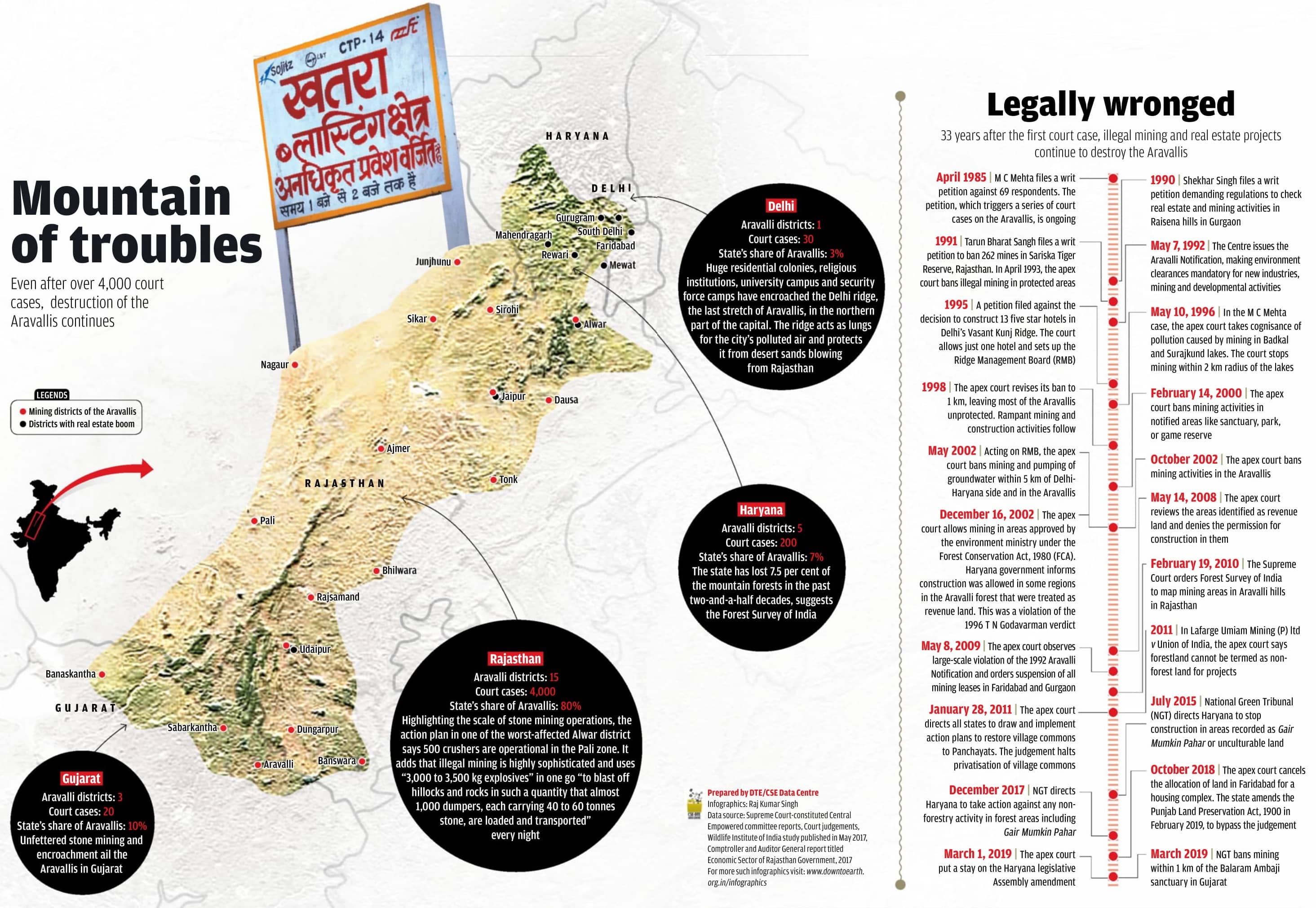 The Aravallis have had a profound global effect and continue to influence the subcontinent’s climate. Some 750 million years ago, for example, a massive Malani volcanic eruption created the mesa upon which Jodhpur’s Mehrangarh fort stands today. At that time, our planet was covered from pole to pole by ice, a condition which paleontologists christened Snowball Earth. The copious lava flow from the Malani event was, perhaps, the first trigger to liberate Earth from the grip of ice and eventually led to the explosion of multicellular life on the planet.

In modern times too, the Aravallis continue to have an impact upon the climate of northwest India and beyond. During monsoons, the mountain range gently guides the attenuated monsoon clouds eastwards towards Shimla and Nainital, thus helping nurture the sub-Himalayan rivers and feeding the north Indian plains. In the winter months, it protects the fertile alluvial river valleys (the para-Indus and Gangetic) from the assault of cold westerly winds from Central Asia.

The Aravallis also impact the groundwater along the areas they pass through. The seemingly impervious granite-gneiss and quartzite rocks bear small crack and fractures, and the somewhat porous sandstones and marble on top help regulate the flow of water. Hydrologists are now beginning to appreciate that the quartzite and granitic networks under the deep alluvium form complex groundwater aquifers which hold immense quantities of water and act to release it slowly.

An official map of Delhi by the Geological Survey of India shows that the Aravallis were also an impediment that prevented the spread of sediments brought down by fast-flowing rivers that emerged from the young Himalayan ranges. Soil scientists believe that the alluvium that lies east of Delhi is the Varanasi or “older” alluvium deposited between 32 million and about half a million years ago. To the west of the Delhi Ridge lies the Ambala or “younger” alluvium (aged only 26,000 to 12,000 years old) which overlies the “older” alluvium. 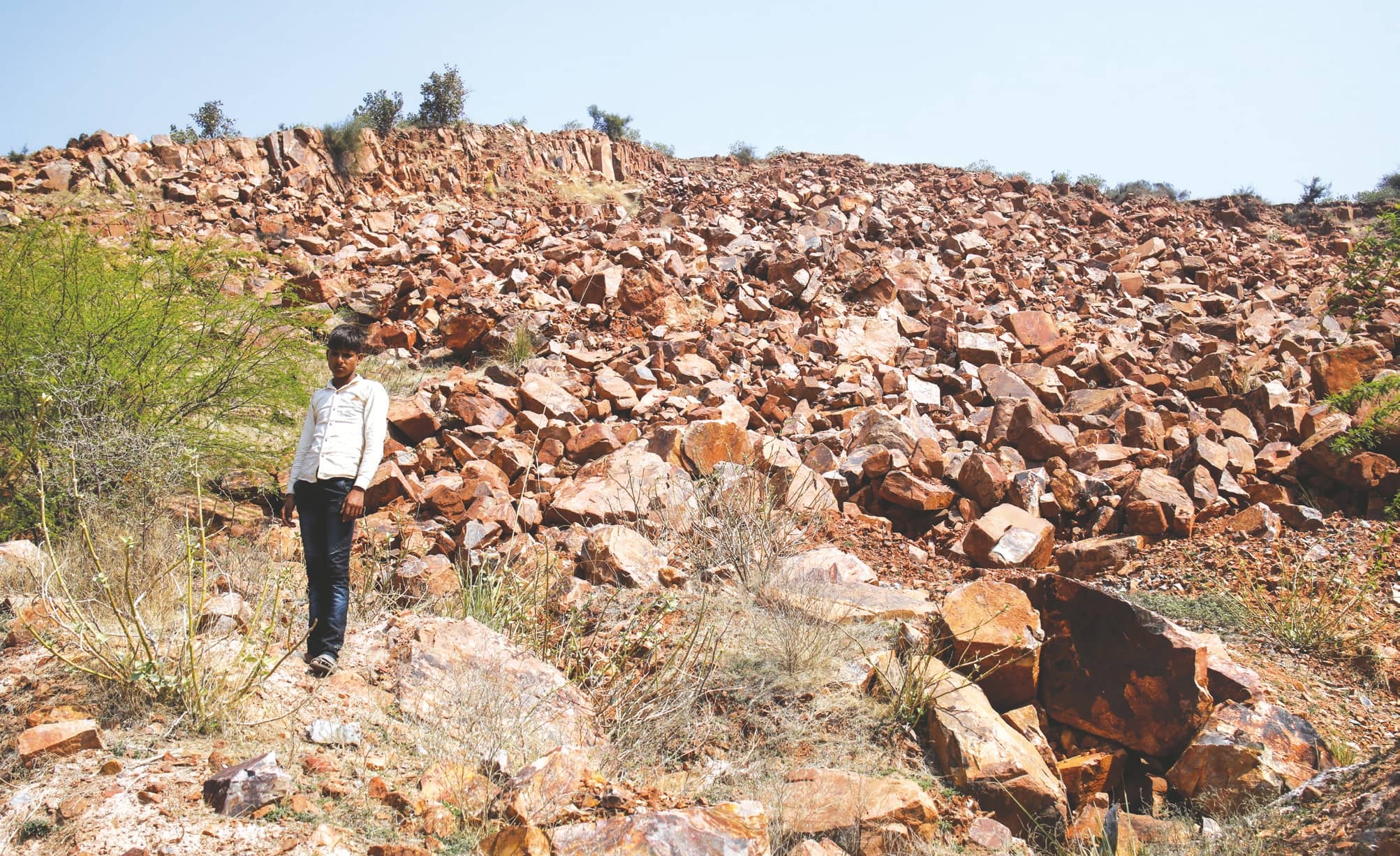 In some places, the thick alluvium has been eroded and the slopes and river channels have created spires of alluvium such as those that we see in the Badlands of the Chambal. Around Delhi too you can spot these along the western side of the Biwan-Mandkola Ridge in Faridabad and beyond the construction sites along Sohna Ridge in Gurugram.

And if you think that beyond the rocks and the aquifers, these arid wastelands and scrub forests have very little to dazzle us with, get ready to be surprised. Opposite the posh Mayo College in Ajmer is a hill called Madar. There seems to be nothing out of the ordinary about it but every summer night from crevices of the rocks on this hill emerges a creature that exists here, and nowhere else, and it has a feature that no other of its kind has. It is a fluorescent gecko (labeled Cyrtodactylus madarensis from Greek kurtos “curved” or “stooped”; daktylos “finger, toe”) and it emits a faint yet discernible glow which, perhaps, aids it to hunt at night. There is very little known about this enigmatic gecko; only a handful of wildlife experts know of it, and even fewer have seen it.

And this is not all. There are also endemic plants, mushrooms, spiders, even a frog, toad, snake and a clutch of other creatures that exist only in the Aravalli; many of these are understudied and their abundance is unknown. Sadly, these creatures don’t vote or shout at protests at Jantar Mantar, and their voices remain unheard.

The landscape of the Aravallis, its geology, geography, forests, soils and water have defined history of the region and remains an integral part of the future of much of northwestern India. By destroying the world’s oldest mountain range by mining its rocks, excavating its soils, cutting the trees that precariously hold a thin soil cover, or senselessly extracting the ancient water channels, we risk much more than we can even begin to fathom.