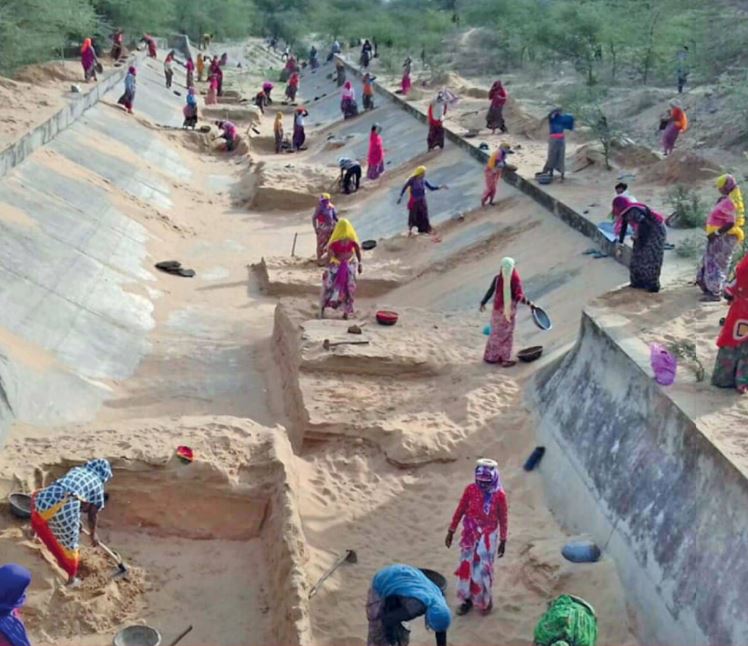 This is the number of assets created across rural India in the four months since the COVID-19 lockdown to tap natural resources. This is also the potential of the Mahatma Gandhi National Rural Employment Guarantee Act, 2005 (MGNREGA), a programme envisaged to alleviate poverty among the rural people by using their only capital—labour. So, what has helped the program that over the years got mired in controversies make a comeback? Down To Earth travels to districts that witnessed reverse migration on a large scale to understand this transition. They find a script that can change the rural-urban dynamics forever. Demand for MGNREGA works shows an unprecedented spike—more than 30 million households have asked for employment for three consecutive months. Governments are harnessing the surplus labour to create assets that will ensure livelihood even after people are weaned off the wage support. People too are using this opportunity to pick up the pieces of their lives in villages they had once left.

HAS THE next batch of work been sanctioned?” asks Ram Ratan from a distance, sitting amid the sweating crowd waiting in silence on a humid July afternoon at the panchayat office of Dhurala village in Haryana’s Kurukshetra district. As always, he is dressed in neatly ironed trousers, shirt and sandals. With a post-graduate degree in psychology, he is among the most qualified youths in the village. The official responds, “Yes. We are in talks with the irrigation department about cleaning and de-silting a canal and with the Indian Railways about clearing the tracks.” The news pacifies the crowd, including Ratan, waiting eagerly for more work under the country’s largest public wage programme, the Mahatma Gandhi National Rural Employment Guarantee Act, 2005, popularly known by its acronym MGNREGA. The programme, implemented in 691 of the country’s 739 districts, is in fact dubbed the world’s largest state-sponsored job-scheme to eradicate poverty.

As per its preamble, MGNREGA aims to enhance the livelihood security of rural households by guaranteeing them “100 days of unskilled manual work” every financial year. At least 75 per cent of the total works must be related to water conservation, the Act mandates.

Yet, the rush for MGNREGA works at Dhurala panchayat office somehow appears unusual. Well-qualified people like Ratan rarely scout for jobs under the public wage programme. Besides, Haryana, being an industrial state, has never seen such a huge demand for MGNREGA works. Manoj Kumar, additional block programme officer (abpo), Thanesar block in Kurukshetra, informs that they implemented MGNREGA works in Dhurala last year, after a gap of three years, while constructing a community centre. “Though the programme is demand-based, we had to cajole the residents to take up the work. People here are usually reluctant as most of them are skilled and work in adjoining cities as construction foremen, tailors, drivers, gardeners or teachers.” 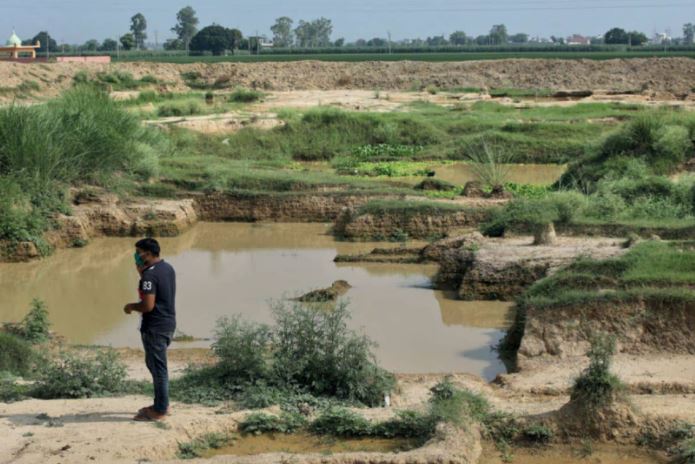 Ratan, who has been preparing for the position of assistant professor in-state colleges, also worked as a “Saksham” teacher—an honorary assignment under the state government’s Saksham Yuva Yojana that provides employment to educated unemployed youth—in a government school in Kurukshetra city. But his whole world came crashing down when the state government on March 24 announced the lockdown to contain the spread of the novel coronavirus (covid-19) and the school was temporarily closed. Soon, the Union government extended the lockdown till the end of May, choking his only source of income. Ratan’s younger brother too lost his job and was back in the village. It dealt a huge blow to his family of 13, struggling to bear the treatment cost of Ratan’s two-year-old daughter, who suffers from a heart ailment, and an elder brother, being treated for psychological illness. That is when Ratan decided to apply for a job card under MGNREGA. “I worked for 40 days and received much more than what I used to earn from teaching,” he says. Haryana offers ₹309 a day as MGNREGA wage, one of the highest in the country. “I am not sure how we would have survived otherwise.”

The management information system (mis) maintained by the MGNREGA website shows during the four months since the lockdown (April to July), Dhurala generated 5,140 person-days of employment, benefitting 226 households. The figures were just 3,630 for the whole of last financial year. In neighbouring Dayalpur village, where only one family demanded wage support last year, 204 availed employment under MGNREGA till July this year. Kumar says owing to the surge in demand, the district administration has expanded the coverage of the programme; nine new villages have been added in Thanesar alone. The state follows the trend of Dhurala and Dayalpur. Haryana has budgeted 10 million person-days of employment under MGNREGA for the current financial year. During the first four months, it has exhausted almost half of the labour budget by providing wage support to 4.5 million people. There has been a 154 per cent increase in the MGNREGA work demand during these months, compared to the corresponding period last year.

THIS IS AN UNUSUAL SURGE

Demands have not only crossed all records, it has happened during the leanest period

The trend in other parts of the country is no different from that witnessed in Haryana. But what has come as a surprise is the unprecedented surge in the demand of MGNREGA works in the country during the leanest months of May, June and July. This is the period when people prepare their fields for Kharif crops. A majority of people who had migranted also returned home briefly to participate in the farm works. Construction activities under MGNREGA also take backseat due to the arrival of monsoon. But covid-19 has upended the trends this year. 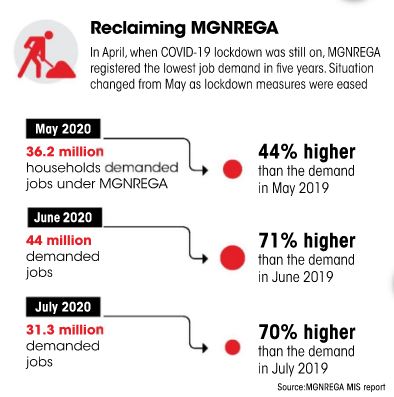 On an average, 21.5 million households seek works under MGNREGA in a month in the country, shows an analysis of the mis data between 2013-14 and 2019-20. In April, when the country was still under covid-19 lockdown, MGNREGA registered one of the lowest demands in recent times—12.8 million. But the demand curve moved northwards as soon as the government began easing the lockdown measures and those engaged in the urban informal economy returned to their villages (see ‘Reclaiming MGNREGA’, p31). By May, over 36 million households had registered for work. The demand rose to over 40 million in June—almost double the average demand for the month during the past seven years.

A state-wise analysis shows in June, 57 per cent of the demand was generated from the five states that reported the return of a large number of informal sector workers—Uttar Pradesh (that has received 6.2 million workers), Rajasthan (5.3 million), Andhra Pradesh (4.4 million), Tamil Nadu (4.1 million) and West Bengal (3.5 million). In at least 30 states and Union Territories, more households demanded works in July than the average of the past seven years. Odisha witnessed the sharpest increase of 206 per cent, followed by Bihar (199 per cent), Karnataka (192 per cent), Jammu & Kashmir (182 per cent), Madhya Pradesh (164 per cent) and Uttar Pradesh (157 per cent).

What could have prompted this unusual surge? Did the rural agrarian economy fail to absorb the surplus labour? A similar surge in MGNREGA work demand was witnessed in 2009 when a severe drought gripped large parts of the country. This is believed to have helped the United Progressive Alliance in its re-election that year. Going by the trend so far, MGNREGA work demand this year is set to break the 2009 record. Does this mean the May-July surge was propelled by the pandemic-induced unemployment and economic upheaval? There is no clear-cut answer to this.

What’s clear is that both the authorities and people are working in tandem, probably for the first time in MGNREGA’s history, to make the most of it. Districts with high job demands have used this opportunity to create thousands of water conservation works, in letter and spirit. The focus is now on rebuilding the villages’ base of natural resource-related capital. 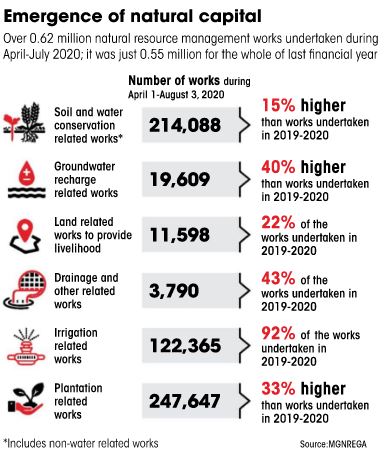 Haryana has been a beneficiary as well as the victim of the Green Revolution. Due to over-exploitation of groundwater for irrigation, water table in the state has dropped to critically low levels. In Thanesar block, water table has dropped by almost 22 metres over the past 45 years, shows data with the Central Ground Water Board (cgwb). So, in early June, when people started demanding wage support, the block’s rural development agency came up with a win-win solution.

In Dhurala, it employed people to revive a johad, traditional percolation pond on the village common land, lying abandoned for years. In Dayalpur, where people depend on groundwater for 90 per cent of their irrigation needs, the village pond was desilted and deepened. Both the works were completed before the monsoon arrived. By the end of July, the johad in Dhurala had the capacity to hold 34,000 cubic metres (cu m) of water. Kumar claims that the pond at Dayalpur can harvest and store over 52,000 cu m of rainwater by the end of the monsoon season. It can then be used to irrigate almost one-sixth of the 600 hectares (ha) farmland in the village.

The pond at Dayalpur has, in fact, been selected to be developed as a model under a new campaign of the state government to reduce dependence on groundwater by rehabilitating ponds and using them for rainwater harvesting. The block officials are now busy creating awareness among the farmers of Dayalpur on how to maintain the structure, budget the harvested water and use it for irrigation. “We utilised MGNREGA to create assets for the villages while providing residents the much-needed cash through wage. Since the residents have revived these together, there is already a sense of ownership among them towards the water structures,” says Kumar. 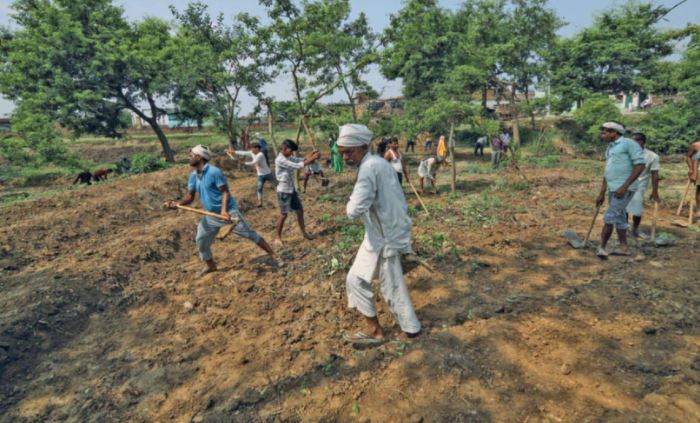