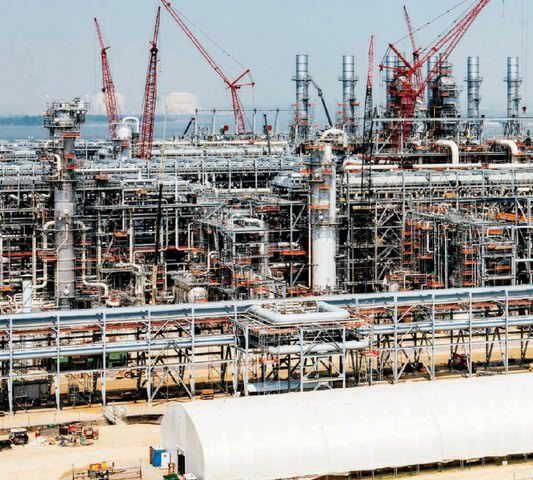 Rising from a Louisiana Bayou, America's most unlikely energy project will change the natural gas market.

From a mile away, at the distant end of a flat, two-lane road, the Sabine Pass Liquefied Natural Gas terminal materializes like an alien city from the haze of the Louisiana bayou. Five white cylinders with domed tops, each 140 feet tall and 225 feet in diameter, rise from the empty horizon. Set on the Texas border 4 miles from the mouth of the Sabine River on the Gulf Coast, the terminal is one of the largest industrial energy facilities under construction in North America. The domes, made of nickel alloy and wrapped in a layer of carbon steel, are essentially giant freezers, each capable of holding 81,000 tons of liquefied natural gas (LNG) at –260F.

Cheniere Energy, based in Houston, has spent more than a decade, and upward of $20 billion, turning 1,000 acres of swamp into the first LNG export terminal in the continental U.S. When the terminal goes live later this year, it will change the dynamics of the energy market in North America. The U.S. will be on its way to becoming a net exporter of natural gas. About 700 million cubic feet of the stuff will begin arriving each day from all over the country—from Texas, Pennsylvania, Ohio, and as far away as North Dakota—to this spot at the end of America’s natural gas pipeline network.

At the terminal, the gas will circulate through roughly a mile of steel pipes and refrigeration systems organized into metal racks spread out across the plant. The racks aren’t unlike the one on the back of a household refrigerator, except they’re 500 feet wide and a quarter of a mile long. In the heart of each rack are two “cold boxes,” the biggest of which is a 1,400-ton, seven-story steel rectangle. Those boxes are the property of ConocoPhillips. What happens inside is so secret that a Cheniere employee can’t go in without being accompanied by someone from ConocoPhillips.

Over about five minutes, the gas will cool until it becomes a highly pressurized liquid, weighing 3.5 pounds per gallon, after which it will get pumped into those giant storage tanks. From there it will be loaded onto foreign tankers and sold to customers worldwide, from power utilities in Spain and Britain to state-owned gas corporations in India and Korea.

To cool all that gas, Sabine Pass makes its own power. Cheniere paid General Electric $1 billion for 24 gas-fired turbines that were initially designed as jet engines. By the time the terminal is fully operational, they’ll generate about 450 megawatts of electricity, enough to power a city of almost 300,000 homes. The docks at Sabine Pass are in water deep enough to accommodate some of the largest tankers in the world. The energy each ship will be able to carry is equal to the explosive force of a 7.5-kiloton atomic bomb.

Sabine Pass isn’t a project sponsored by an energy magnate such as Bill Koch or a megacorporation like Chevron. It is, for the most part, the slightly inadvertent creation of Charif Souki, 62, who’s been the best paid, yet least known, executive in the business. He rarely speaks to trade publications and almost never does interviews with the national press—although he occasionally appears on Mad Money, as he did on Aug. 31. Twenty years ago, he ran a restaurant in Los Angeles.

In a business dominated by lifers and specialists, Souki is a sparkling anomaly. He grew up in Beirut during the 1950s and ’60s, splitting time between hanging out at the beach and skiing in the mountains an hour away. His father suggested school in the U.S., so he headed to Colgate in upstate New York. Three years later, Souki had a degree in finance, and two years after that, an MBA from Columbia Business School.

By then, civil war had broken out in Lebanon, so he took a job in New York at a small investment bank. Souki was young, eager, and fluent in French and Arabic. It didn’t take his bosses long to figure out what to do with him. “They basically told me to go to the Middle East and grab as much money as you can and bring it back,” Souki says. “That was my mission.”

He spent the next decade putting together deals, shuttling among the Middle East, New York, and Paris. He had a young wife and two kids in Paris whom he’d go weeks without seeing. By the mid-1980s his first marriage had ended. He remarried, to Rita Tellone, a New York model he’d met in Paris, and shortly after retired at age 34. “I’d been chasing dumb deals for the last couple years, and I was tired of representing other people’s money,” Souki says. “I’d made a few million dollars. It was the mid-’80s,and I didn’t see anything that really made sense.” In 1987 he bought a house in Aspen and settled down to raise a second family and enjoy the outdoors. Within a year he was restless. A decade of living in some of the world’s best cities had given Souki some elevated tastes. One of his favorite restaurants was Mezzaluna, an unpretentious Italian place on the Upper East Side of Manhattan. Souki cut a deal with the owner and opened a replica in Aspen. It was an instant hit, quickly attracting Jack Nicholson, Melanie Griffith, Don Johnson, and other ’80s A-listers. Souki eventually opened three more restaurants in L.A. “I was in my 30s and needed a hobby,” he says. “I thought I knew something about the restaurant business, which I didn’t.”

In 1993 he moved to L.A. His two oldest kids lived there, and he needed to spend more time managing the restaurants. Plus, seven years as a gentleman of leisure in Aspen had drained his bank account. “I had made a few investments on my own and thought I had enough to retire on,” Souki says. “I was wrong.” Over the next few years, he went back to raising money, this time for small businesses. They usually needed $2 million or so—nothing too big, but it got Souki putting deals together again. L.A.’s Mezzaluna had become one of the trendiest restaurants in town, a ’90s yuppie hot spot in the Brentwood neighborhood.

On June 12, 1994, Nicole Brown Simpson showed up for dinner with her family. Her mother left her glasses behind; later that night, a young waiter, Ron Goldman, stopped by Simpson’s condo to return them. Both he and Simpson were murdered, leading to the media supernova of the O.J. Simpson trial.