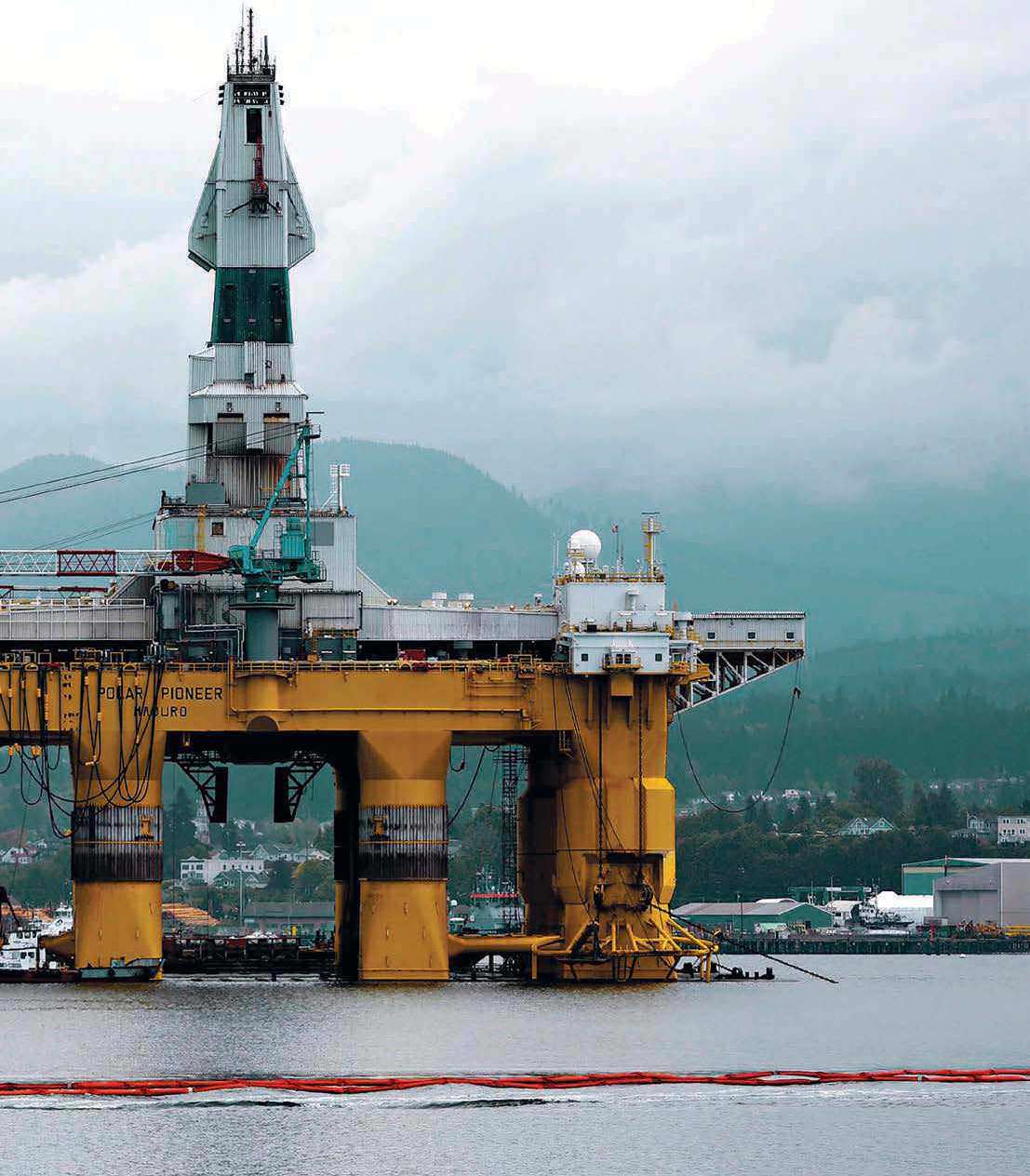 A global oil glut has tanked prices and cut profits as politicians vow to confront climate change. So why is Shell drilling for "extreme oil" north of Alaska?

In a windowless conference room in Anchorage, a dozen Royal Dutch Shell employees report on the highest- profile oil project in the multinational’s vast global portfolio. Warmed by mid-July temperatures, Arctic ice in the Chukchi Sea, northwest of the Alaskan mainland, is receding. Storms are easing; helicopter flights will soon resume. Underwater volcanoes—yes, volcanoes—are dormant. “That’s good news for us,” Ann Pickard, Shell’s top executive for the Arctic, whispers to a visitor.

Overhead, a bank of video monitors displays blinking green radar images of an armada of Shell vessels converging on a prospect called Burger J. Company geologists believe that beneath Burger J—70 miles offshore and 800 miles from the Anchorage command center—lie up to 15 billion barrels of oil. An additional 11 billion barrels are thought to be buried due east under the Beaufort Sea. All told, Arctic waters cover about 13 percent of the world’s undiscovered petroleum, or enough to supply the U.S. for more than a decade, according to government estimates.

Despite the July 21 meeting’s military-like precision, peculiarities become evident. Radar shows an icebreaker called MSV Fennica heading in the wrong direction—south toward Portland. Three weeks earlier, the 380-foot vessel ripped open a 39-inch-by-2-inch gash in its hull, the result of scraping against a shallow-water hazard in Dutch Harbor, Alaska. Because the multipurpose ship also carries spill response gear, the accident caused federal regulators to restrict drilling to the topmost 3,000-foot section of Burger J—and not farther down into the oil-bearing zone—until the Fennica gets patched up in a Portland repair facility and travels 2,300 miles back north. The detour gave Greenpeace the chance to stage a social media-friendly “#ShellNo” photo op on July 30, with protesters in climbers’ slings hanging from a Portland bridge and temporarily inhibiting the Fennica’s movements, while “kayaktivists” heckled from the harbor. In another setback, U.S. wildlife officials concerned about noise- sensitive Arctic walruses have vetoed Shell’s original plan to drill two wells simultaneously. “That caught us by surprise,” Pickard concedes.

Surprise lurks in the Chukchi, whose frigid waters north of the Bering Strait span from Alaska to Siberia. Logistical and legal obstacles have repeatedly delayed the Arctic initiative, on which Shell is spending more than $1 billion a year—more than $7 billion so far and counting. The single well in the Chukchi Shell aims to excavate this summer could be the most expensive on earth, and it hasn’t yielded its first barrel of crude.

Activists have sued; judges have intervened. In 2010, work stopped when the Obama administration temporarily suspended offshore drilling throughout the U.S. after the BP disaster in the Gulf of Mexico. Back in action in 2012, Shell suffered a maritime fiasco with Keystone Kops undertones: Ship engines conked out, tow lines snapped, and a massive drill barge ran aground, requiring the U.S. Coast Guard to rescue storm-stranded workers. This July 16, former Vice President Al Gore called the Obama administration’s decision to approve Shell’s drilling “insane.”

Two weeks later, on July 30, Shell’s chief executive officer, Ben Van Beurden, announced that as a result of $50-a- barrel oil, a 55 percent decline since last year, the company’s profit fell by a third in the second quarter. Expecting prices to “remain low for some time,” Van Beurden announced plans to eliminate 6,500 jobs, part of a broader contraction in a reeling industry. Even against this challenging economic backdrop, Shell won’t postpone or downsize its Arctic dreams. The offshore Alaska field, Van Beurden said, “has the potential to be multiple times larger than the largest prospects in the U.S. Gulf of Mexico, so it’s huge.”

This raises the question of why Shell is doubling down on the Arctic amid a worldwide supply glut, and at the same time that many politicians are vowing to address global warming. Among the major oil companies, it stands out for its frank discussion of the threat posed by its business to the world’s climate. Its top executives have even professed a desire to rethink fossil fuels and move toward renewable energy sources. And yet it’s assuming immense operational risks to drill in the Arctic.

Shell executives don’t deny the apparent contradiction. “We do believe in climate change,” says Pickard. Shell’s Scenarios group, an in-house think tank that management points to as an emblem of its open-mindedness, has done extensive work undergirding the company’s support for government policies encouraging development of renewable energy sources, she says. But the Scenarios research also justifies aggressive exploration for more crude. With the global population rising from 7 billion to more than 9 billion by 2050 and total energy demand nearly doubling, “hydrocarbons are going to be needed for an awfully long time,” Pickard says. “That’s where Alaska fits into the picture.”

Even sympathetic observers find it curious, though, that Shell and Shell alone sees future profit in the Chukchi, especially after its misadventures there in 2012. Chevron, ConocoPhillips, ExxonMobil, Statoil, and Total have all put Arctic plans on hold. “Given the environmental and regulatory risks in the Arctic and the cost of producing in that difficult setting, assuming they ever get to producing, Shell must anticipate an enormous find—and future oil prices much higher than they are today,” says Nick Butler, a former senior strategy executive at BP who does energy research at King’s College London. “It’s a dangerous wager.”

One of the most powerful women executives in a decidedly masculine industry, Pickard, 59, meets a reporter visiting .

Anchorage in jeans and a blue button-down shirt. Her rise through the ranks, first at the pre-merger Mobil and since 2000 at Shell, is especially impressive as she lacks the engineering or geology pedigree normally required of senior oil industry management. She has a graduate degree in international relations and has overseen exploration and production in Africa, Australia, Latin America, and Russia. “Ann doesn’t suffer fools,” says a (male) subordinate who pleads for anonymity.

In 2005, Shell put Pickard in charge of sprawling operations in Nigeria long shadowed by pipeline thievery, militant attacks, and accusations—denied by Shell—of collaboration with brutal government crackdowns. Fortune magazine in 2008 labeled her “the bravest woman in oil”—a silly accolade, perhaps, but one that accurately reflects her reputation at Shell.

Most of the world’s “easy oil” has already been pumped or nationalized by resource-rich governments, Pickard says, leaving independent producers such as Shell no choice but to pursue “extreme oil” in dicey places. “I enjoy the challenge,” she says.

That’s why in 2013, when she was planning to retire to spend more time with her husband, a retired Navy commander, and their two adopted children, she changed her mind and took over the troubled Arctic project.

Pickard emphasizes that she enjoys the outdoors as much as the next person, but she’s no purist. “You hear a lot that the Arctic is pristine,” she says, using air quotes. “Yeah, it’s pristine in parts, but there’s been oil and gas up here for a long time.” She points to maps showing the enormous Prudhoe Bay complex within the Arctic Circle on Alaska’s North Slope. Active since the 1960s and still one of North America’s largest oil fields, Prudhoe has provided more than 12 billion barrels of crude via the Trans-Alaska Pipeline. In 1989, it was Prudhoe oil that sullied Prince William Sound on Alaska’s south central coast after the grounding of the tanker Exxon Valdez.