Eating Contests: Is There A Limit To How Much You Can Consume In One Go? 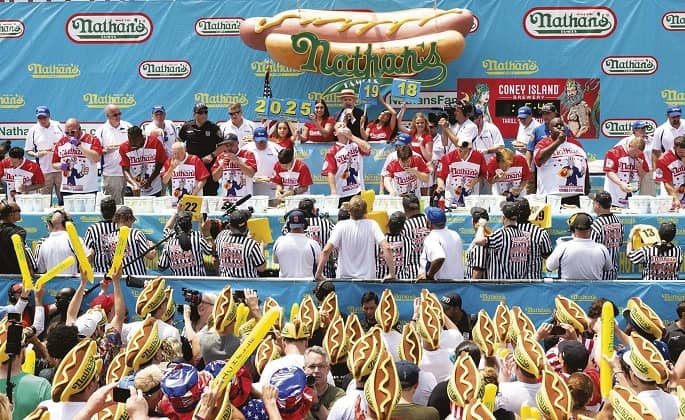 This summer, the world record for the ‘sport’ of hotdog speed-eating was broken for the third time in five years. Are we approaching peak performance?

Who would you pick as the world’s greatest-ever athlete? Usain Bolt, Serena Williams, Muhammad Ali, Tiger Woods, Roger Federer, or Michael Phelps? No doubt they have all dominated their sports at various times, but what about Joey Chestnut? Most people have probably never heard of him, but for the two million viewers who tune in to what must be the weirdest event of the US sporting calendar, Joey ‘Jaws’ Chestnut is a bona fide legend.

Chestnut is the undisputed champion of competitive eating and has utterly dominated the hundred-year-old ‘Nathan’s Famous Fourth of July International Hot Dog Eating Contest’ – an event that has become the must-see event for fans of Major League Eating everywhere (yes, seriously). Every summer, frankfurter-guzzling heavyweights fly in from all corners of the globe to stuff themselves silly for 10 minutes in front of a crowd of 40,000 screaming spectators, with each competitor hoping to return home with the victor’s Mustard Belt. Chestnut, a 104kg (230lb) food hoover has been toppled only once since 2007. He has broken more world records than any other competitor, and in this year’s low-key socially distanced event, he broke his own world record (again) by ingesting a gut-busting 75 hotdogs (buns included) in 10 minutes – a staggering 33 more than the next best competitor.