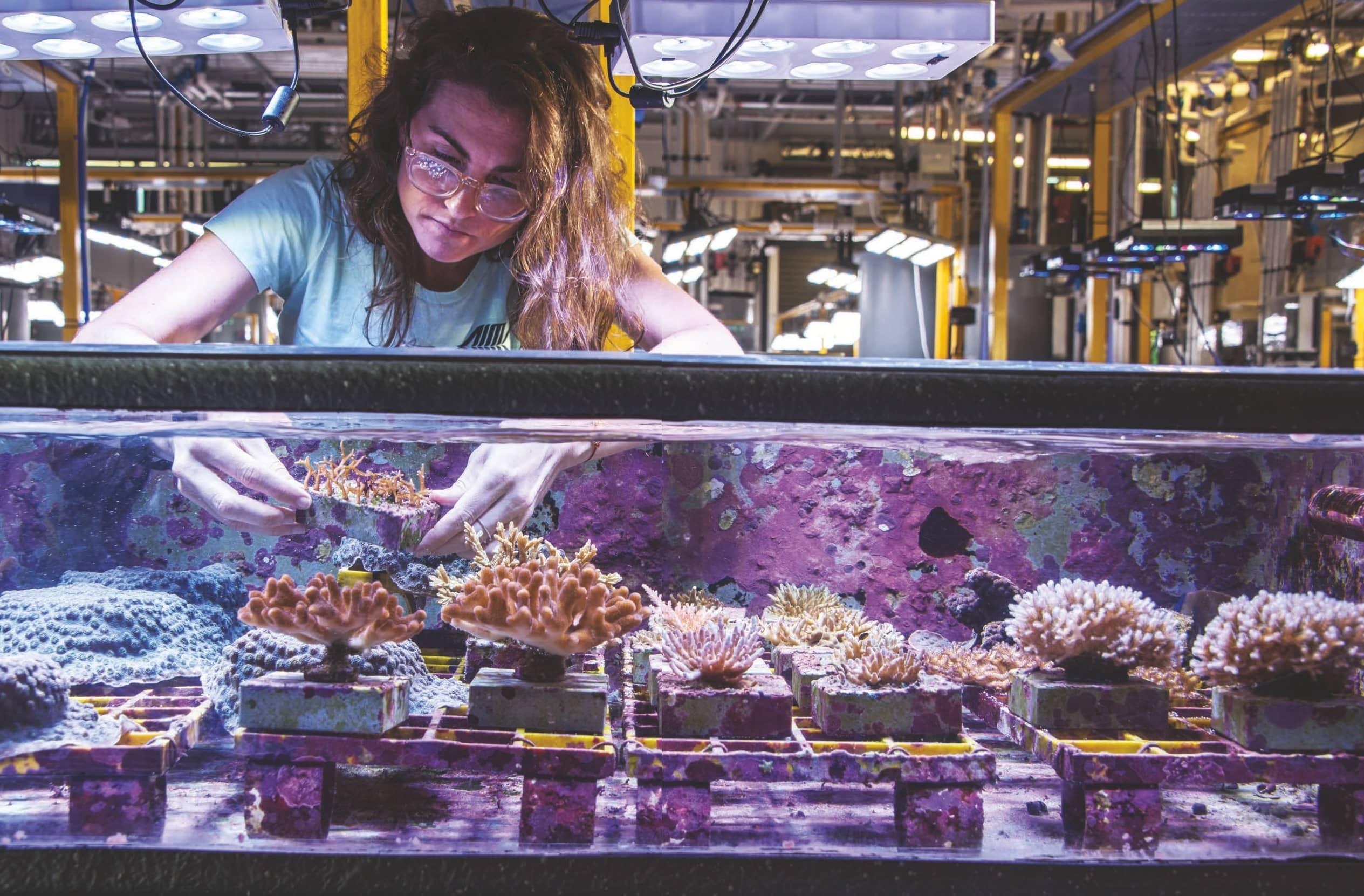 Justin Gilligan joins scientists on an expedition to the far northern Great Barrier Reef to witness the annual mass coral spawning spectacle and to look for ways to help this ecosystem under pressure.

EACH YEAR, AFTER a late spring or early summer full moon, a spectacular synchronised coral spawning occurs on the Great Barrier Reef (hereafter the GBR or the Reef). This nocturnal natural phenomenon is like an aquatic fireworks display, as red, yellow and orange bundles of sperm and eggs are released en masse into the ocean.

Most coral species are hermaphrodites – simultaneously both male and female – and typically release tightly packed bundles of sex cells, which open at the ocean’s surface allowing eggs to meet compatible sperm. During peak spawning, more than 100 species release their sex cells – their gametes – during just a few nights. This phenomenon was first discovered off Townsville in 1984 by a group of young scientists. It was a turning point in their careers and earned them a prestigious Australian Museum Eureka Award for Environmental Research in 1992. They initially documented that 32 coral species had spawned shortly after late spring full moons in 1981 and 1982 at three different locations.

Mass coral spawning is now known to be the most common reproductive mode for the Reef’s corals, and is the culmination of months of development for their sex cells. Timing of the phenomenon is linked to seawater temperature, lunar phases and factors such as the daily cycle of light and dark. In some years, when the full moon falls early in the October–November spawning season, some colonies hold off for a later lunar cycle, resulting in multiple spawning events.

By expelling eggs and sperm at the same time, coral increases opportunities for fertilisation. This mass approach also overwhelms predators: many eggs will be eaten, but at least some will make it through to be fertilised. These develop into mobile larvae that at first move in ocean currents but search out and finally settle on hard substrates in suitable locations to begin growing into new coral colonies.

Mass spawning is believed to have been a critical factor in the Reef achieving its extraordinary size and diversity over many millennia. Now, few of those coral species are able to cope with the rising sea temperatures wrought by human-induced climate change. 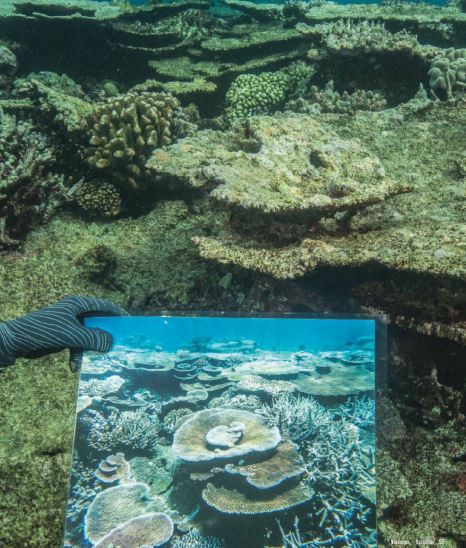 IT’S HARD TO BELIEVE that the humble and diminutive coral polyp could be responsible for creating the largest living structure on the planet, the GBR.

Each tiny polyp has tentacles to feed on plankton, as well as multitudes of tiny algae – called zooxanthellae – living in their tissues. These absorb sunlight to produce oxygen and nutrients, a food source that allows polyps to thrive in the clear, nutrient-poor tropical waters, providing energy to help create their calcium carbonate skeletons that make up the Reef. It’s a critical symbiotic relationship that allows a healthy coral reef to lay down multiple layers, creating those vast structures that teem and pulse with life.

The sprawling coral kingdom of the Reef is framed offshore by the cobalt blue waters of the Coral Sea and inshore by muddy brown coastal waters that are home to deadly jellyfish, saltwater crocodiles and lined with mangrove thickets.

The Reef’s size contributes to its greatness: stretching for 2300km, it covers a total area of 344,400sq.km – and countless photographic opportunities are woven into its inviting patchwork of individual reefs.

Yet scientists now estimate that this thriving marine system, where underwater photographic dreams were once so easily realised, experienced a 50 per cent loss in living coral cover following unprecedented back-to-back mass coral bleaching events in 2016 and 2017.

These events starkly demonstrated that mass bleaching is the greatest threat to the Reef, more than pollution from run-off, coral-eating crown-of-thorns-starfish, coastal development, other pest species or over-fishing. Experts suggest that by 2030, these destructive episodes will occur every year, threatening the Reef further by reducing recovery times. (It’s estimated that an area of reef affected by a mass bleaching event takes about a decade to recover.)

It used to be that when diving on the northern two-thirds of the Reef, the chances of finding patches of thriving coral would be high and you’d have to search hard to find an unhealthy section. Today, that situation is reversed. The GBR Marine Park Authority released a report in August 2019 that downgraded its long-term outlook for the Reef from “poor” in 2014 to “very poor”.

However, in 2017, GBR Legacy, a not-for-profit social enterprise that brings together scientists, educators, communicators and the general public to engage in reef research, identified a site in the worst-affected region that appears to have withstood the worst of the bleaching. The corals at this site are now considered to be resilient ‘super stock’, able to withstand severe heat. I joined GBR Legacy to journey back to the site in spring 2018.

This new organisation’s operating model represents the future of coral reef conservation by providing cost-effective access to the Reef for researchers, and making their findings available to a global audience through effective use of social and more mainstream media such as Australian Geographic, which is an official sponsor.

On board the vessel with me was a research team from the Australian Institute of Marine Science (AIMS) whose aim was to collect coral colonies that had survived mass bleaching for laboratory research back at the National Sea Simulator (SeaSim) in Townsville. Also aboard was Dr John ‘Charlie’ Veron, known as the ‘Godfather of Coral’, who wanted to document hard coral species on a rare section of thriving reef. This football field–sized area of healthy coral has now been named the GBR Legacy Super Site and the second voyage was timed to align with the annual November/December mass spawning event.

GBR LEGACY’S MANAGING DIRECTOR, John Rumney, is an old hand when it comes to coral spawning. He estimates he has been part of the spawning action on at least 15 occasions and fondly recalls the first time he stumbled across the event by chance in the 1970s.