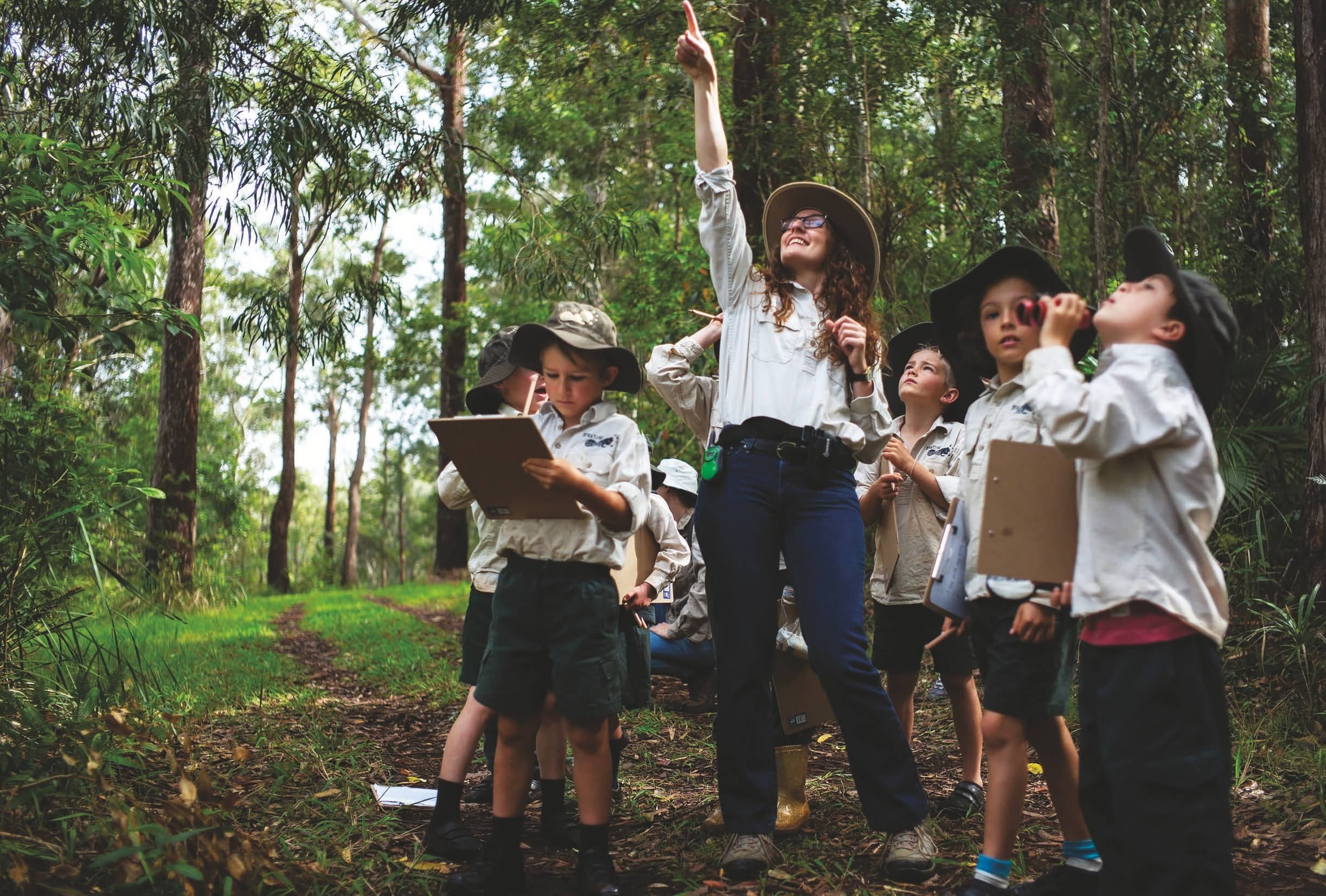 Nature-based schools are gaining momentum in Australia as more and more kids are swapping the classroom for the bush and proving that quality learning can take place in non-traditional settings.

Cath Johnsen
THE CALLS OF honeyeaters, golden whistlers and whipbirds herald the start of the school day at The Nature School, as students in khaki and green uniforms trickle into bushland at Port Macquarie, on the New South Wales mid-north coast. As they arrive, the children drop their bags in favour of building a makeshift shelter, insurance against clouds threatening above. Head teacher and self-confessed bird nerd, Catherine Oehlman, is setting up a camp toilet while debating with a student about whether a hollowed-out termite mound in a nearby tree may be home to a kingfisher or kookaburra. “I’m a scientist!” another student declares, hovering over a jack jumper ant nest with a magnifying glass. “Look, Catherine – I made a new discovery!”

Once base camp is set up, the children wander through the bushland and make more discoveries: a discarded fish head suggests a white-bellied sea-eagle, a pile of scat has likely been left by an eastern grey kangaroo, and a koala is spotted resting in a gum tree. Clutching clipboards with paper and pencils, and with binoculars slung around their necks, the children stop frequently to record their findings. When they return to base camp, they run off to explore a natural moss garden, complete with muddy puddles for splashing in and Tarzan vines to swing from.

This is school, but not as we traditionally know it. Inspired by the long-standing traditions of European forest schools, the Australian bush school movement is fast gaining momentum. Breaking down many of the boundaries that are typically found in mainstream schools, bush schools offer a more integrated approach to subjects, timetables and even grade levels.

“The lines between inside and outside, learning and play, and teachers and students are all softer here at The Nature School,” says Catherine. “We learn wonderful things about the world, and importantly about our place in it. Oh, and we also climb trees, play in the rain, use tools, safely light fires, and get dirty. Most schools don’t offer that.”

Protecting and fostering a love of the environment, as well as allowing children to enjoy an unhurried childhood with plenty of time for outdoor exploration and experimentation, is at the heart of nature-based learning programs. “In response to the high-tech, hyper-scheduled world we find ourselves living in, parents are embracing these slow programs that allow children to be childlike,” says Catherine.

Lloyd Godson, co-founder of The Nature School and parent of a current student, Oliver, agrees. “The reason we started the school was because we wanted kids to feel connected to their natural world and understand they’re part of this huge picture; they’re a very small but important piece in the puzzle,” says Lloyd, theâ€‹ Biosub man who was named the Australian Geographic Society’s 2007 Adventurer of the Year after he famously lived under water for more than two weeks in a steel container (see AG 87). “A lot of people think of The Nature School as a bunch of hippy kids running barefoot in the bush with no buildings, but it’s not. It’s about instilling a lifelong love of learning and encouraging kids to remain inquisitive and curious about the world around them.”

Catherine is also quick to debunk the “hippy school” perception. “Our primary school still has to be a real school,” she says. “We have to meet outcomes in English, science and geography, but the way we do that is by learning within nature and from nature.” And there are bricks and mortar classrooms at The Nature School, fittingly built with mud bricks made from the distinctive red soil found in the area. Inside, there’s a choice of sitting desks or standing desks as well as baskets overflowing with natural treasures – colourful feathers, bulging seed pods and smooth pebbles.

Yet Catherine says most of the time the classroom walls don’t exist, because their classroom is simply the world beyond. “We promote place-based education – learning where the child is – and for this little school it’s Port Macquarie and the places around here,” she says. “We have beach, we have bushland, we have lake areas, and so our classroom isn’t just within the walls of our building, it extends past the playground and beyond into the place that is Port Macquarie.” 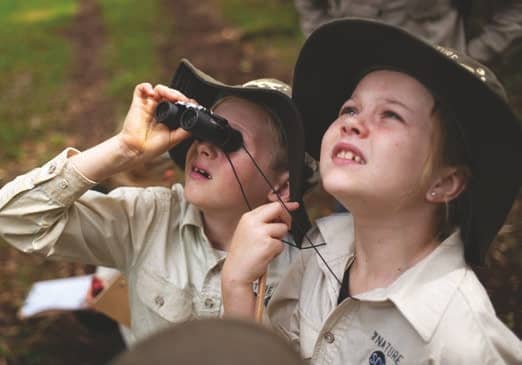