Navratri - A 9-Day Journey To The Center Of Your Self 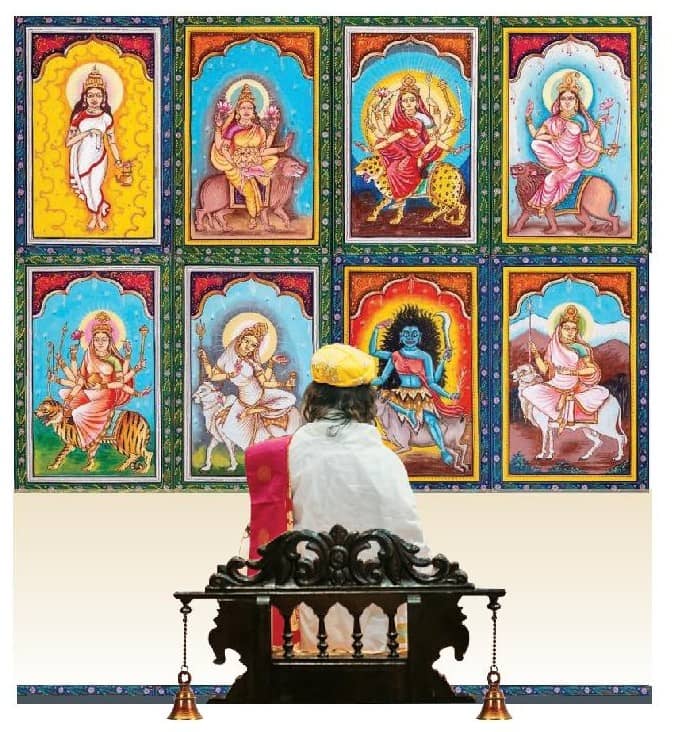 Navratri is celebrated to glorify the spirit in us. It is only the spirit in us that can destroy all negative qualities (inertia, pride, obsession, cravings, aversions, etc). Turning inward during Navratri, and getting in touch with the spirit within, we can overcome these negative tendencies and invoke the positive qualities that are within us, thus feeling elevated and renewed.”

The festival of Navratri is a time for self-referral and getting back to the Source.

Navaratri is the festival of nine nights. Just as there is one night devoted to Shiva called Shivaratri, there are nine nights dedicated to Shakti (Divine energy) and this is called Navaratri. Just as a baby takes nine months to be born, the Devi takes nine days to rest and is born on the tenth day with greater strength and valour to conquer evil and re-establish good. “Ratri” means night, which gives deep rest, relief from the three tapas (the three botherations) at the physical, causal and subtle levels. Night relieves us from these three afflictions and brings rest to the mind, body and consciousness. It is a time of prayer and rejuvenation. These 9 days are like coming out of the mother’s womb once again; having a new birth. Creation happens in the darkness; The nine months in the womb are like nine long nights where the spirit takes human form.

Though our life is governed by the three gunas, we seldom recognize and reflect on them. The first three days of Navratri are attributed to tamo guna (inertia), the next three days to rajo guna (activity) and the last three days to sattva guna (tranquility). Our consciousness sails through the tamo and rajo gunas and blossoms in the sattva guna on the last three days. Whenever Sattva dominates in life, Victory follows. The essence of this knowledge is honoured by celebrating the tenth day as Vijayadashami.

During this time of transformation, nature sheds the old and gets rejuvenated. As a snake sheds off its outer skin, we too should cast away all our old things and make our consciousness new.

According to Vedic sciences, matter reverts to its original form to recreate itself again and again. Though Navratri is celebrated as the victory of good over evil; the actual fight is not between good and evil. From the Vedantic point of view, the victory is of the ‘Absolute Reality’ over the ‘Apparent Duality’.

In the words of Ashtavakra, it is the poor wave which tries to keep its identity separate from the ocean, but to no avail.

The Mother Divine is recognized not just as the brilliance of intellect (buddhi), but also the confusion (bhranti); she is not just abundance (Lakshmi), she is also hunger (shudha) and thirst (trishna). Realizing this aspect of the Mother Divine in the entire creation, leads one to a deep state of Samadhi. Through wisdom, devotion and nishkama karma, one can attain advaita siddhi or perfection in the non-dual consciousness.

Navratri is the time when this energy can be tapped. One of the ways to do so is to worship all the names and forms of the Divine Mother. “The divinity is everywhere, but it is dormant. Pooja (worship) is the process to awaken it.” - Gurudev Sri Sri Ravishankar

The first three days of Navratri celebrate Devi in the form of Goddess Durga. Goddess Durga represents Power and Protection. In her presence, negative forces fade away. She transforms negativity into positivity.

Durga is also referred to as ‘Jaya Durga’ or the one who brings victory. When you pray to Durga, she brings forth dynamism in you to make things move.

The Durga mantra strengthens our will power and creative power and also helps us to endure difficult situations.

Meaning: Salutations, salutations and salutations to that Supreme goddess who lives in all beings as power of inner strength