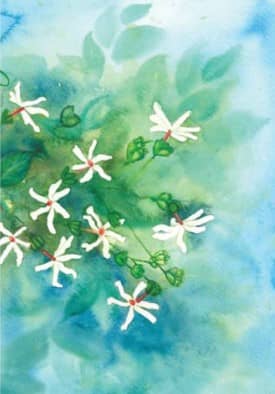 DR. V. RAMAKANTHA is a former Indian Forest Service officer and member of the Green Initiative at the Heartfulness Center at Kanha Shanti Vanam in India. Having spent most of his working life living in forests and jungles, in tune with the natural world, he shares his knowledge about some of the amazing medicinal plants of India, starting with Parijata, the Queen of the Night.

Queen of the night 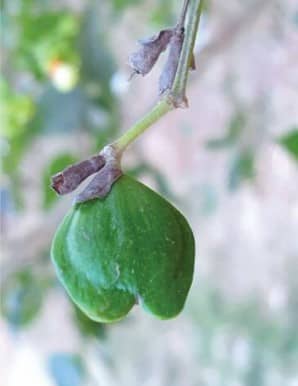 Parijata is known as Coral Jasmine owing to its snow-white flowers with coral-red tubes. This small ornamental tree, with its heavenly scented flowers and drooping branches, is found all over the Indian subcontinent, with a special name in every language. It flowers almost the whole year-round and is known as Night Jasmine because the delicate blooms open by evening and falling off soon after, leaving a carpet of flowers in the morning. This gives it the epithet “Queen of the Night.”

Rajani-hasa, “the one who forms the night’s smile,” is one of the Sanskrit names for Parijata, and there is a story behind this name. Parijata was a beautiful princess who fell in love with Surya Deva, the Sun God. Initially, Surya Deva, who rode the fiery chariot in the sky from east to west, did not take a fancy to the princess, but over time, he was won over by the single-minded devotion of Parijata, and he left the sky and came down to Earth to spend some loving time with her.

Now, the Earth was not a conducive environment for Surya Deva so, after spending a few seasons, he left for his original abode, albeit reluctantly. Heartbroken, princess Parijata tried to follow her lover, but the intensity of the heat from the Sun God burnt her to ashes.

Moved by sorrow and pity, Surya Deva granted Parijata another life in the form of a tree with the purest of white flowers with blazing orange hearts, and Surya Deva visits her every night. The Parijata flowers are very fragrant as they are kissed by the Sun God. Even now the flowers can’t bear the rays of the sun, and with the first rays at dawn, they are shed.

In India, the Parijata tree has a close association with Lord Krishna. The Vishnu Purana, an ancient text of the Hindus, gives a graphic description of the sequence of events that led to the descent of this ambrosial tree to Earth. The story goes that Indra, king of the gods, had a serious confrontation with the noble-born but despicable Naraka. Naraka was the son of Bhumi, the Earth, and he possessed some of the powers of Lord Vishnu. He was not happy to confine himself to his home on Earth and took frequent forays to the heavens, from where he would steal whatever took his fancy before he returned home. He was so powerful that no god dared stop him, not even when he snatched the nectar-dropping earrings of Aditi, the mother of Indra.

Indra realized that he was no match for Naraka, and needed help. After much reflection, he decided that it had to be Lord Krishna, who was happily residing in his newly-built city of Dwaraka. So, Indra descended to Earth and beseeched Lord Krishna to put an end to Naraka’s atrocities.

Krishna agreed and, accompanied by his wife Satyabhama, he set off to vanquish Naraka. With the help of the Sudarshan Chakra, Krishna killed the demon, cutting him in two. Krishna returned the nectar-dropping earrings to Aditi, who was very happy. She blessed him, saying, “So long as you live in the world of mortals, you shall be invincible, and no harm shall come to you either from celestials or demons.”