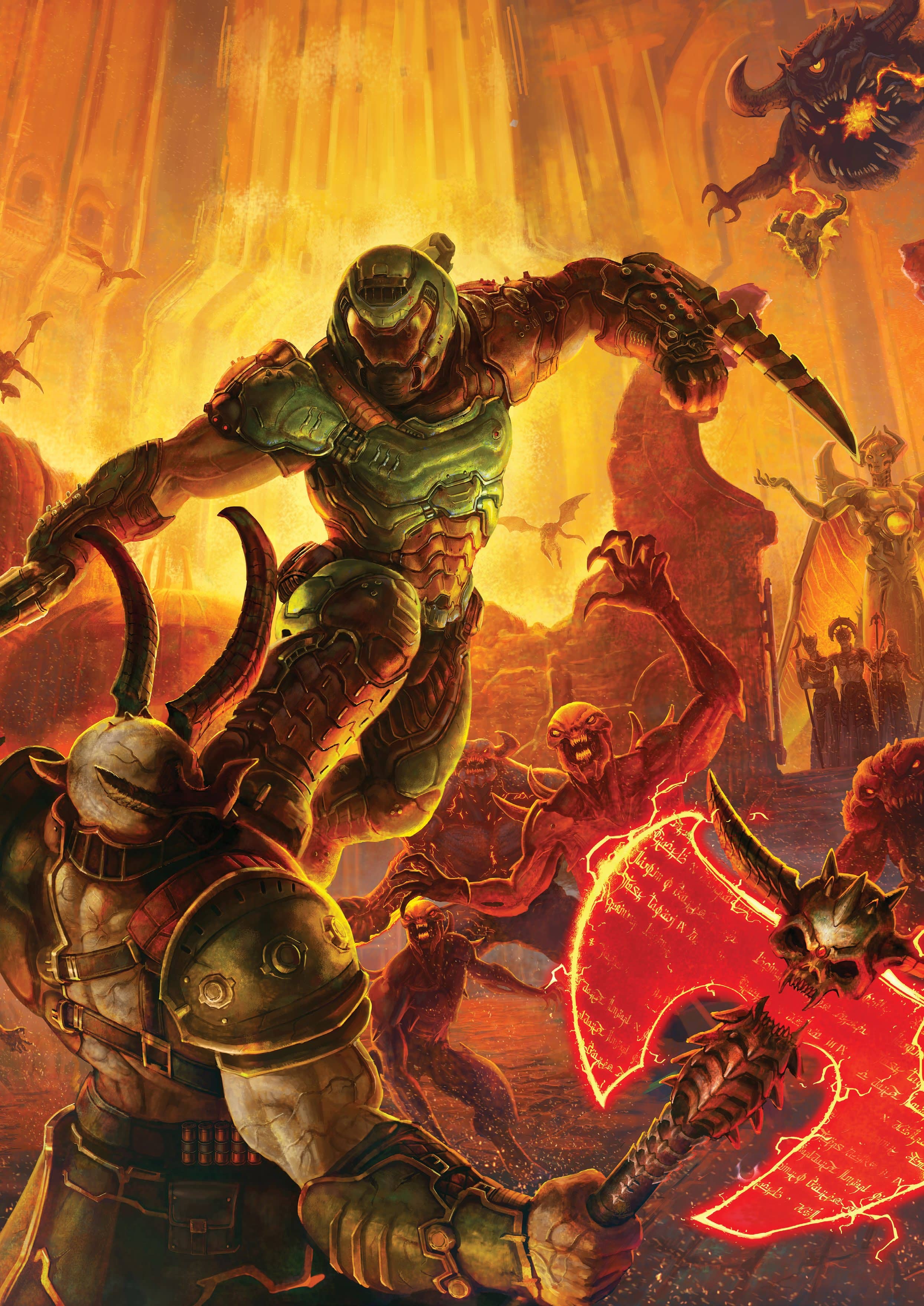 I’m In Space, Above Mars, So Close That The Hulking Red Planet Fills The Entire Screen.

A Massive Chunk Has Been Torn Out Of It And I’m Hopping Between Shards Of Rocky Debris That Have Broken Loose, Slaughtering Demons With A Super Shotgun.

Doom Eternal, A Sequel To 2016’s Stellar Reboot, Is A Game Of Impossible Scale And Drama. So Much So That The Previous Game Seems Almost Boring In Comparison.

From the beginning our goal was making you fight in unbelievable locations, surprising you every step of the way,” says id Software’s Marty Stratton, producer of Doom Eternal. “From the very start to the final boss, players will be seeing things they’d never expect from a Doom game.” “It’s all about engagement,” says creative director Hugo Martin, a word the two developers use several times in our interview. “Not only do these moments achieve that from a visual perspective,” He adds, “But the mechanics contribute to it too.”

The doom slayer can now climb, grabbing hold of surfaces with a certain texture, which opens up the level design massively. He can dash in mid-air as well, crossing wide gaps and leaping up to climbable surfaces. “these new abilities are interwoven with our visual set-pieces, so it’s not just for show,” says martin. “you have to think your way through the level design in Doom Eternal.”

I get a taste of this when, to make my way across this mess of floating space-rocks, I have to air-dash between them, grabbing hold of them at the last minute, otherwise I’ll fall into the void below.

Like the series’ gunplay, these new movement controls feel slick and responsive. But occasionally I have to remind myself that I’m playing a Doom game. I ask the developers how, with all this wild new stuff going on, they’re staying true to the distinctive feel of the series.

“As long as the solution to every problem involves the player being aggressive somehow, it feels like Doom,” says Martin. “Every action the player takes is an aggressive one, whether it’s jamming your hands into a rock face and climbing like a bear, breaking chains apart, or smashing through a wall. All of this feeds into the idea of being the doom slayer, reinforcing his role in the world.”

Another thing I notice in my demo is how the flow of the level feels much more organic than anything in the 2016 game. “As fun as the last Doom was, there was a monotony to it,” admits Marty Stratton. “In the later levels especially it felt like corridor, arena, corridor, arena. There’s a grandeur to the combat arenas, or combat stadiums as hugo likes to call them, in Doom Eternal. But the in-between spaces, the glue of the level, aren’t just about getting you from one place to the next. We want you to engage with these more this time.

“There’s a lot of exploration and secrets, which are of course a big part of any Doom game. We want players to use their minds. there are some fun, simple, but engaging puzzles in there too. Puzzles with a small p. combat puzzles, really. We really want the moments between the fighting to be interesting.” 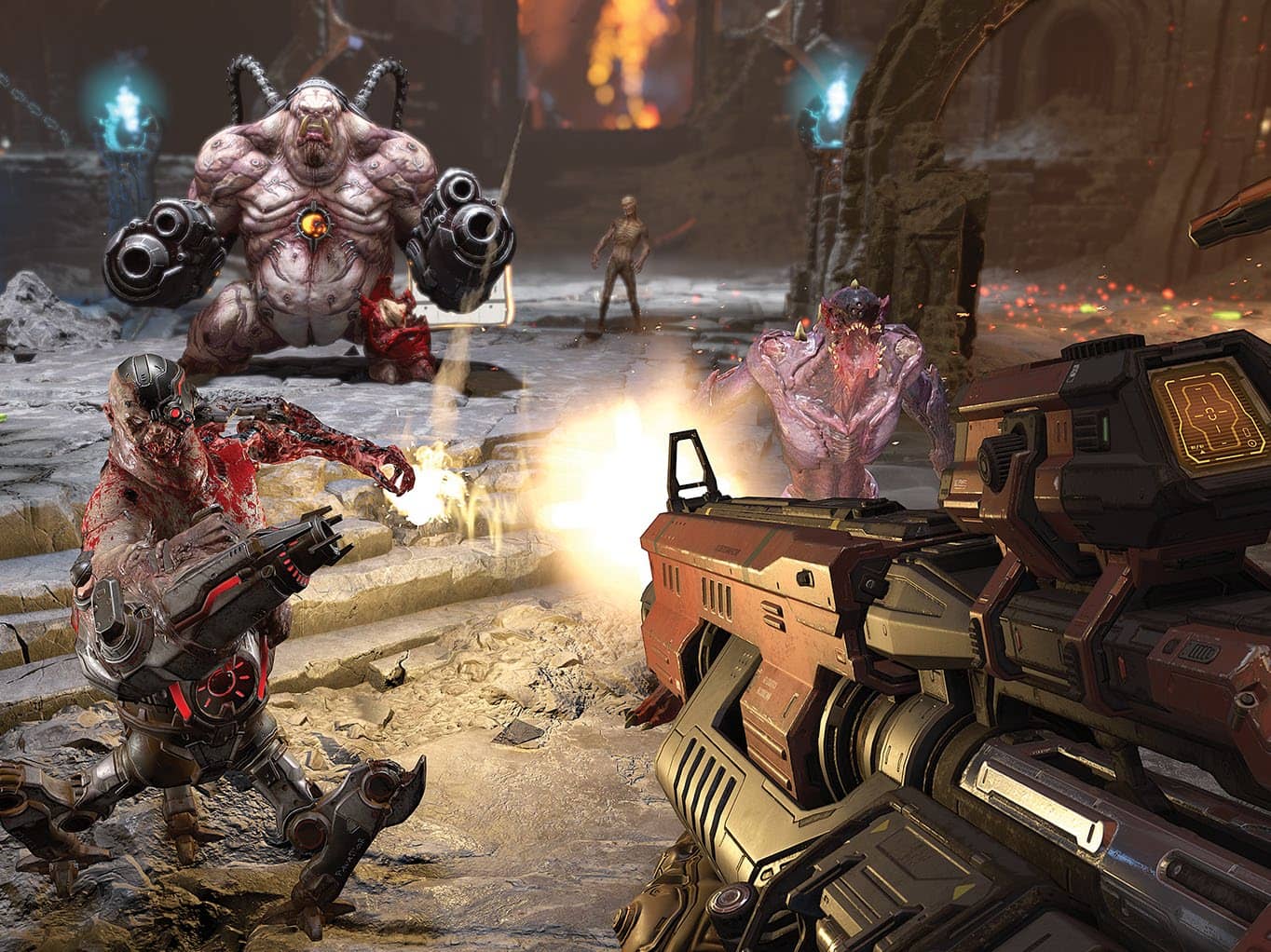