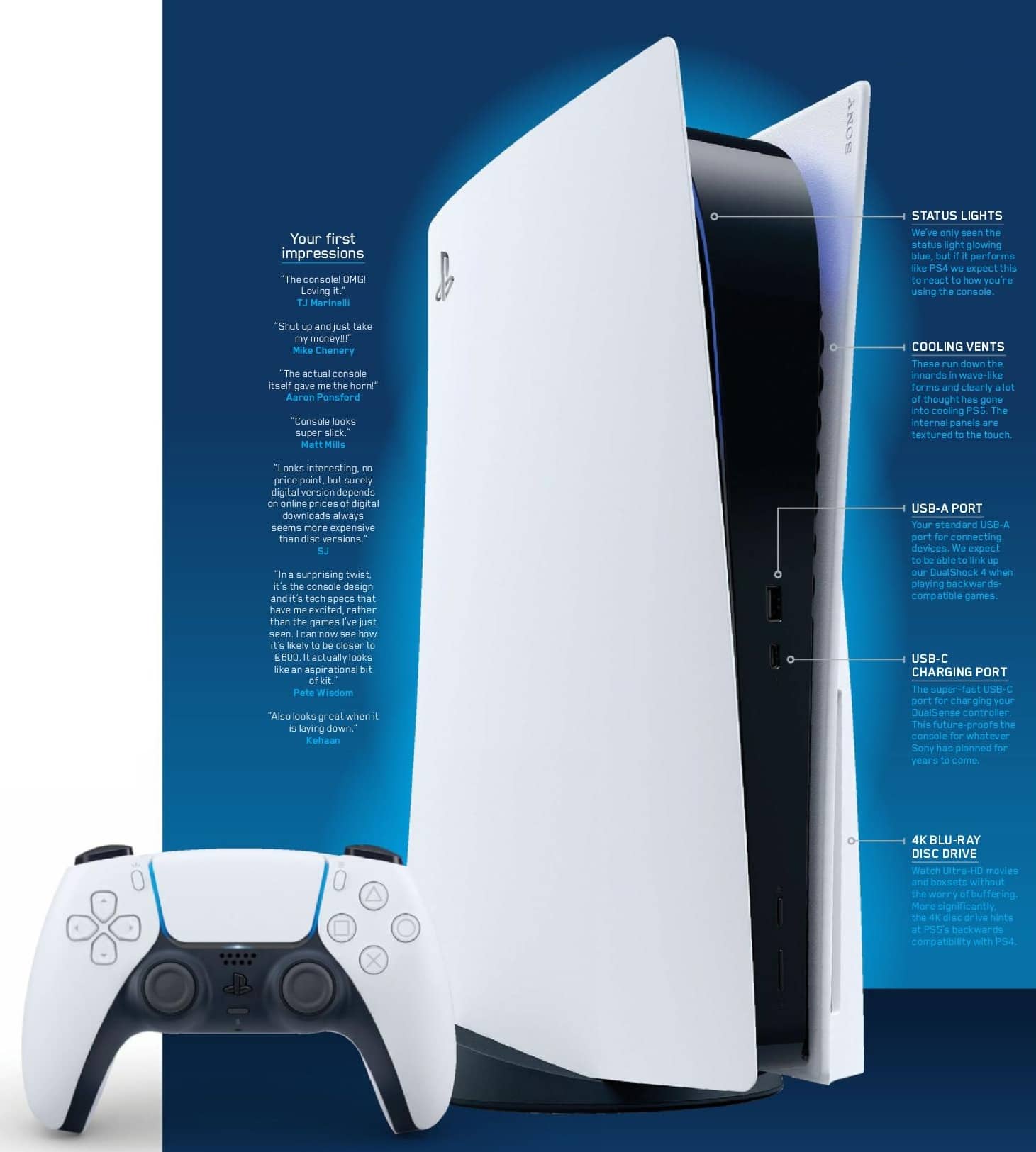 PlayStation 5 has emerged from the shadow of the DualSense controller. This console is a work of art, it’s no block of unwieldy, ill-shaped hardware that will struggle to squeeze under your TV. This is a fluid, elegant box of tricks deserving pride of place.

The console features a glossy black, vented inner wrapped in a curvaceous white shell that draws the eye up and out, hiding the bulk of the machine. Size-wise, PlayStation 5 is slightly fatter than a PS4 Pro but taller when on its vertical stand. The form and flow of the console is even clearer when we get in close to the hardware. The white internal ‘lapels’ of the machine are textured to the touch; the black engine of the console is smooth and glossy. The hidden vents have a wave-like form. All, it seems, is geared around cooling the console as much as making it look graceful.

Looked at together with the previously revealed DualSense, we can see both pieces of kit emit a subtle blue glow. The DualSense has lights behind the grips and touchpad, the PS5’s are around the vents. We anticipate this will change colour in line with what the hardware is doing.

There’s a reason PlayStation 5 looks so distinctive. Sony believes in generations of consoles, and in creating new hardware that draws a line in the sand and demands developers cross it to create bold new experiences.

Speaking at the Future Of Gaming event, Jim Ryan, president and CEO of Sony Interactive Entertainment, explained: “You’ve seen our most striking console design yet […]. At PlayStation we believe in generational transitions and we put years of work into making them happen. We want you to enjoy the unique benefits of moving from one generation to the next.”

At launch this ‘holiday’ there will be two versions of the console available. One is a disc-based machine, with an Ultra HD Blu-ray drive, and the other is driveless, called PlayStation 5 Digital Edition. Equal in power, there are slight visual differences between the two models – the disc-drive-free edition is slimmer and doesn’t feature the same lower bulk as the drive-carrying console, as you would expect.

Alongside PlayStation 5 there will be new, equally graceful, peripherals to enhance the experience of playing a next-gen game. We already know about the DualSense – its haptic feedback and adaptive triggers will enliven any new game – but the new console will launch with a family of extras to power the next-gen experience: the Pulse 3D Wireless Headset for 3D audio gaming, a new HD camera for broadcasting, creating, and PS VR, and a Media Remote that teases a console that’s tied into your streaming life like never before.

“PlayStation 5 marks the biggest generational transition our industry has yet seen. […] showcases how PS5 has inspired developers to create experiences that are transformative in how they look, sound, and feel,” said Jim Ryan during the Future Of Gaming event.

Cool and sleek, PS5 and its peripherals are cutting-edge on the outside too

Packing haptic feedback, adaptive triggers, a battery rechargeable via USB-C for fast charging, a new lightbar, and built-in mic, PS5’s controller is a thing of beauty.

The console’s stand has been shown propping up PS5 vertically, demonstrating the hardware’s curvy design. Naturally, the new console can also be placed flat on its side.

This is the same console in terms of power and performance, it just lacks the Ultra HD Blu-ray for those of us who have embraced digi-downloads. It means this edition is slightly slimmer.

PS5’s media remote comes with voice control courtesy of its built-in microphone, and is just the gizmo to make PS5 the beating heart of your streaming entertainment.

Charge two wireless DualSense Controllers at once, it’s as simple as that. Handy for when Player Two comes over for a game of FIFA, but it’s also great to have a back-up controller.

A new console is nothing without games, and those new experiences can be found throughout this issue. We love new hardware but it’s really a conduit to new and astonishing games.

Hermen Hulst, head of Sony Worldwide Studios, says PS5 will enable developers to change their core thinking of what a game should be, look like, and how it should play. In many ways it sounds like Sony’s next gen will usher in a revolution, one powered developers to create experiences that are transformative in how they look, sound, and feel,” said Jim Ryan during the Future Of Gaming event. 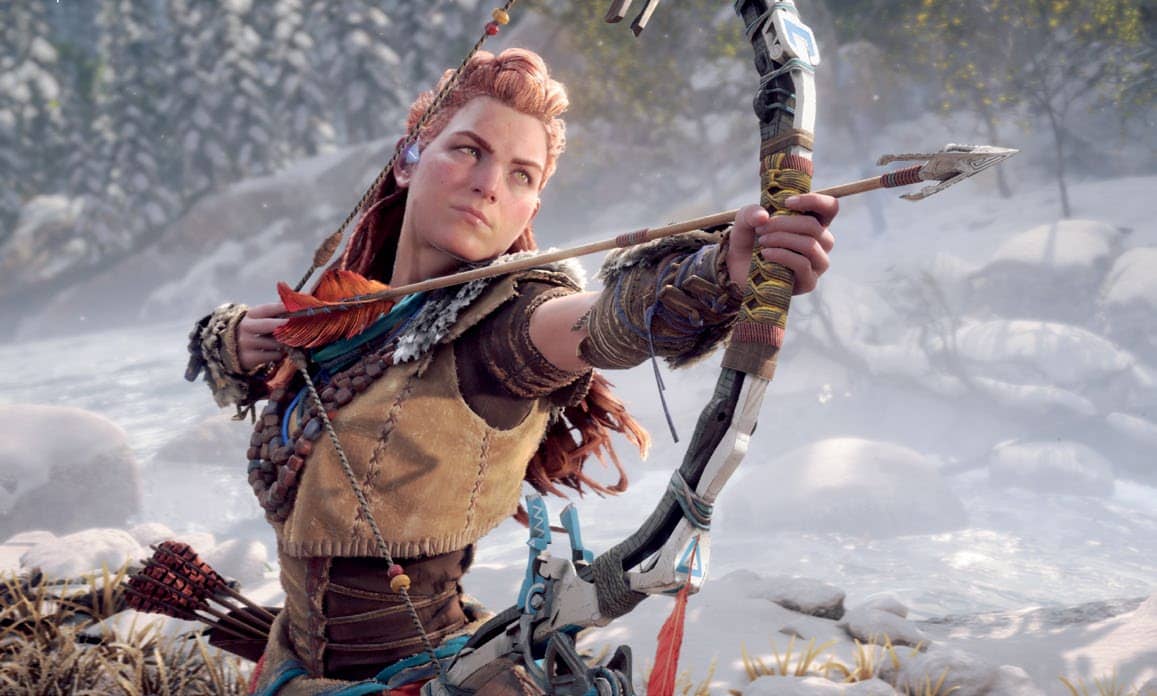 A new console is nothing without games, and those new experiences can be found throughout this issue. We love new hardware but it’s really a conduit to new and astonishing games.