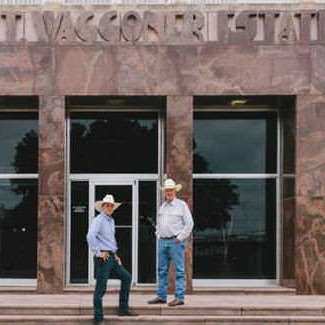 What does it take to sell a Texas property the size of a small nation? They're finding out at the famed Waggoner Ranch.

FOR SALE: Largest ranch in the U.S. within a single fence. Texas fixer-upper with more than 1,000 oil wells; 6,800 head of cattle; 500 quarter horses; 30,000 acres of cropland; tombstones for legendary cowboys, long-dead dogs, and a horse buried standing up. Favorite of Will Rogers and Teddy Roosevelt. Colorful history of drinking and divorce. Fifteen-minute drive to rib-eye at the Rusty Spur in Vernon. Ideal for Saudi oil sheiks, billionaire hedge funders, and dot-commers who can tell a cow from a steer. Profitable, zero debt. Property taxes only $800,00 a year. Price: $725 million.

“IT TAKES DAYS TO SEE IT ALL,” says Bernard Uechtritz. The real estate broker is steering his black Ford F-350 pickup over one of the hundreds of miles of roads ribboning the W.T. Waggoner Estate Ranch 175 miles (280 kilometers) northwest of Dallas. Squinting into the sun, Uechtritz gestures to the sky on his right. “Everything you can see, as far as the eye can see, is the ranch,” he says. He points straight ahead, then behind him, then left. “Each horizon is this ranch.”

Uechtritz (YOO-tridge) is one of two brokers entrusted with the singular task of selling the Waggoner ranch and everything attached to it, from the 29 tractors, to the cut-rock polo barn, to the emptied bottles of Old Taylor bourbon in an abandoned hunting lodge. At 510,527 acres (207,000 hectares), or 800 square miles (2,072 square kilometers), the Waggoner sprawls over six counties and is bigger than Los Angeles and New York City combined. At almost three-quarters of a billion dollars, the asking price is more than quadruple the biggest publicly known sum fetched by a U.S. ranch, $175 million for a Colorado spread in 2007. The Waggoner is one of the 20 largest cattle ranches in the U.S. and is known worldwide for its quarter horses.

It’s been owned by the same family almost as long as Texas has been a state. Last year, a judge in Vernon—a town of about 11,000, 13 miles north of the ranch—ordered a sale of the property and appointed Uechtritz and a co-broker to market it worldwide. The ruling of District Judge Dan Mike Bird ended more than 20 years of litigation between opposing branches of the Waggoner family who couldn’t agree whether to liquidate the property or split it up among themselves.

“It’s history,” says Uechtritz, a blue-eyed, square-jawed 50-year-old who can pass for the Marlboro Man—until he greets you with “G’day” in his Australian accent. “What we’re doing here never happened before and will never happen again.”

As Uechtritz drives the ranch on this warm June afternoon, he takes a call from an oilman in Europe. Over speakerphone, the guy says his company tried to bid for the Waggoner years ago, “but all we got was bullshit.” Uechtritz tells him, “That’s not going to happen, mate.”

He wends his pickup past an old rodeo corral, a truck scale,and a cook shack where cowboys still gobble pre-dawn biscuits and gravy, as they have for more than a century. Uechtritz says the European caller is among more than 600 people who’ve expressed interest in the ranch, “ranging from the really real to the really not.” He says he’s confident a sale will close by year’s end. His co-broker on the deal is Sam Middleton, of Chas. S. Middleton & Son of Lubbock, Texas. That firm and Uechtritz’s employer, Briggs Freeman Sotheby’s International Realty of Dallas, each will collect a commission of $7.625 million if the ranch commands its asking price.

Uechtritz acknowledges a new owner might sell the property off in pieces, fire its 120 employees, and let the Waggoner brand fade away. “That would be a tragedy,” he says. “The challenge is not finding the money; it’s finding the steward. Who is going to put the money up, keep putting the money in, keep the brand alive? I think you owe it to the families who build ranches like the Waggoner.”

ON CHRISTMAS DAY 1909, W.T. “Tom” Waggoner gave his three children land, cattle, and horses valued at $6 million— about $150 million in today’s dollars. Waggoner, whose kids called him Pappy, wasn’t even that wealthy yet.

He was a cattle and horse man like his father, Dan Waggoner, who started buying acreage around 1850. The ranch went from large to vast after the Waggoners earned $55,000 selling longhorns on a Kansas cattle drive in 1870. By the 20th century, the Waggoner reverse-triple-D brand was a Texas icon. Train loads of spectators came to watch President Teddy Roosevelt hunt wolves on the property. Will Rogers, the most famous American humorist of the 1920s and early ’30s, visited frequently, sometimes playing polo.

Watering cattle was a challenge then, as it is today. Tom Waggoner was irked that his ranch hands kept finding crude oil when they drilled for water. He calmed down after the rise of the automobile. Rogers joked, “I see there’s an oil well for every cow.”