Hunted By The Mob 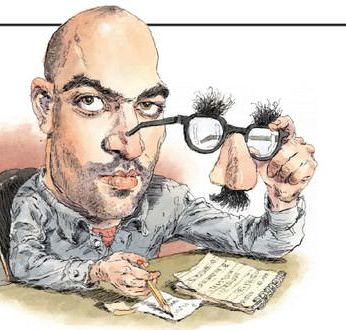 Shortly after the Italian crime journalist Roberto Saviano arrived in New York last fall, he came into possession of an unusual map. Unlike your typical tourist map, this one had been specially made for him by Italian authorities, and marked places he was to avoid—many of them shops and restaurants run by Italian immigrants suspected of connections to the mob.

The forbidden locations proved irresistible. One afternoon, he donned what he calls his “hipster” disguise (glasses, hat, caterpillar mustache) and slipped into a restaurant indicated on the map, where he ordered and waited to see what would happen.

His food came. He ate it. No one noticed him at all.

Back home, Saviano can’t walk down the street without causing a stir. His 2006 exposé of the Neapolitan mob, Gomorrah, has sold more than 10 million copies in some 50 languages; a 2008 film version was nominated for a Golden Globe, and a TV spin-of series was the most-watched show in Italy last year. Saviano grew up in a mob-infested town near Naples (he saw his first dead body lying in the street when he was 13), and his indictment was personal and unrelenting. Gomorrah recounted the horrors of the Camorra (as the Neapolitan mob is known) in a way that demolished the reigning mafia myth: in place of cannoli and codes of honor, he offered child soldiers and bodies being dissolved in hydrochloric acid. In so doing, he forced many Italians to reckon anew with the gruesome reality of the mob.

Yet for all Gomorrah’s fury and fame, one of its most enduring legacies has been its effect on Saviano’s life. After some of the Camorristi featured in the book repeatedly and credibly threatened to have Saviano killed, he was assigned an armed police escort. He spent the next five years being shuttled around Italy between safe houses and police barracks, eternally holed up indoors. He’d become a member of “the community of the escorted”—his term for the collection of writers and journalists, including his now-friend Salman Rushdie, who have been forced to live under protection. By the spring of 2011, he’d had enough. He left for New York, hoping to regain some freedom; the city has since become the on-and-of base of his “exile,” as he puts it.