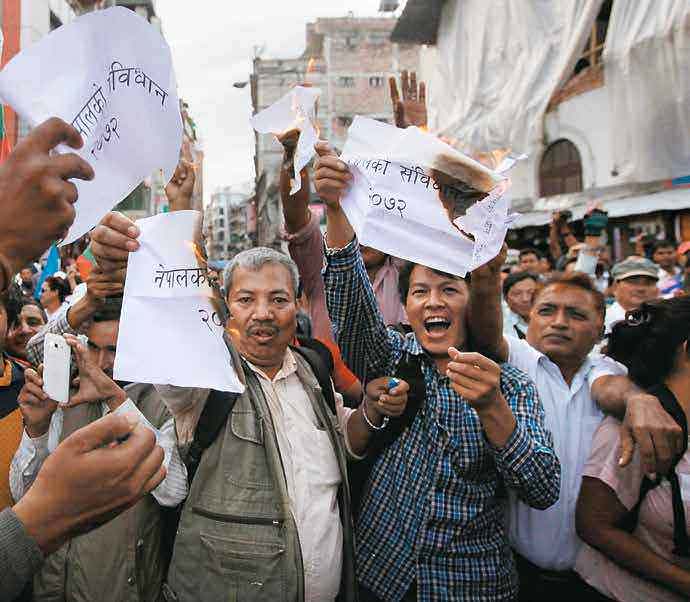 As for much of Nepal, September 20 should have been a day of celebration for India as well. As Nepal’s big neighbour, India had played the chief facilitator and guarantor’s role in the peace process from 2006 to ultimately help bring Maoist insurgents and major political players together to write a new constitution. Yet, on Sunday, when it was finally adopted by an overwhelm­ ing majority in Nepal’s constituent assembly, after years of waiting, it hardly brought forth any cheer from India. A terse MEA statement, bereft of the customary congratulatory homi­ lies, only ‘noted’ the momentous event. If India expected the constitution—Nepal’s seventh in 65 years—to help the nation emerge as a modern and federal republic, it was hugely disappointed. A secular framework was chosen for the constitution, but an essential one pertai­ning to ‘federalism’—if not in letter, then at least in spirit—was missing from it.

Policy planners in India say the consti­tution could have given Nepal the required glue to bring together disparate sections of its society in nation­building. Instead, its adoption last week has once again brought to surface the deep fissures within Nepali society. At the same time, developments there have also posed serious challenges for India. The two countries share a 1,751 km open border. Violence and instability in Nepal, like that witnessed in past weeks in southern Nepal, could easily spill over into India.

Narendra Modi’s critics point to a del­ayed Indian response to the crisis that has been festering in Nepal. Many play­ers, each claiming close proximity to the Indian PM, may have been one reason for New Delhi and Kathmandu’s confused reaction to the volatile situation in south Nepal that has claimed 45 lives. Modi did send foreign secretary S. Jaishankar to Kathmandu on September 18, requesting the Nepali leadership to delay the adop­tion of the constitution. But that is seen as ‘too little, too late’. Nepali leaders had decided on their constitution.

“It is a serious setback for India,” says India’s former ambassador to Nepal, K.V. Rajan. “The euphoria over Modi that was visible in Nepal till a few months back has now gone.”

The Indian PM has lavished special attention to Nepal, as evident in it being the only South Asian nation that merited two visits from him in his first year in office. Both times, Modi had stressed to the Nepali leadership the need for com­pleting the constitution­writing process and making it a document that would see all sections of the Nepali society as equal stakeholders. His visits were followed by a prompt, and much­politicised Indian rescue effort during the earthquake in Nepal—it had allowed Modi’s stocks to be depicted as soaring among Nepalis.

Engage with new dispensation in Nepal, ensure good ties with them

Assure people in Madhes that their legitimate demands will be addressed