A Bihari Story Of The Haar 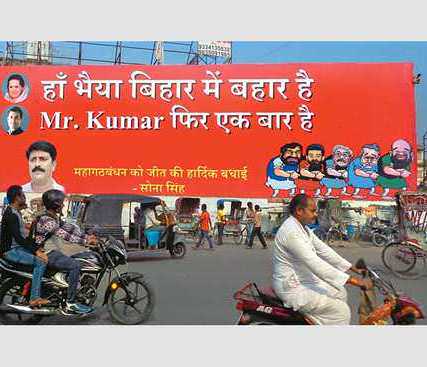 The BJP has paid the price for its inability to understand Bihar and its remarkable people.

The late Arvind Narain Das, whose 1992 book Republic of Bihar con­tinues to be quoted in any authoritative discu­ssion on the state, would often quip that the chat­tering classes of India knew more about Chechnya than Bihar. Almost a quarter century later, the lack of understand­ ing is still striking and came through in many reports from the ground and one could not help but wonder that if the prime minister and the BJP national president had read or known about the book, whether the two powerful Guja­ratis (dubbed 2G in Bihar) would still have gone around the state telling Biha­ ris how miserable they are.

For the record, Bihar occupies half the area of Gujarat but has almost double the population. Unlike Gujarat, which has a coastline and is industrialised, Bihar is land-locked, primarily agrarian and rural. Every now and then, Bihar’s northern plains are flooded so badly that thousands are forced to take shelter on highways or embankments. And unlike Gujarat, with its maritime trade

history, it’s with Nepal that Bihar has a long and open border.

The state was bifurcated in 2000 and Bihar had to give up the mineral-rich and industrialised plateau with urban centres like Jamshedpur, Bokaro, Ranchi and Dhanbad to Jharkhand, a state created by the first NDA government at the centre. The pangs are still being felt in both states. But the two BJP leaders were clearly oblivious to the fact that Bihar has fared much better since than the smaller and richer state of Jharkhand, which has been ruled by the BJP for 11 of the 15 years.

ON a short visit to Bihar last month, we stopped at Makhdumpur, a block headquarters with a bazaar, to have fruit juice. The two young vendors smiled easily and the elder, Rajesh, informed me that they were brothers and had put up the business in the last four years. Asked how much he managed to make, he casually said the sale of fruits and juice left them with a daily ‘income’ that ranged between Rs 1,000 and Rs 1,500. The brothers pointed to a glum friend sitting at a distance and laughed. He had been trying to make a living by selling biscuits, but the business was not doing well. Had the brothers been helped by a bank loan? No, they had not, said Rajesh.

On our way back in the evening, we stopped at Dhanurwa, known for lai, a condiment. Even at 8:30 pm, the marketplace was buzzing and it was a surprise to see people having tea, kachouri and lai at that hour. The shopkeeper, another young man by the name of Santosh, confided that they were people returning from work and would probably have to walk or pedal home before dinner. There was electricity in the bazaar and Santosh was clearly doing well. “Yes, things have changed a lot in the last few years,” he added.

Driving back to Patna later that night, I was reminded about a similar drive that had taken me and my photojournalist colleague Saibal Das from India Today to Jamalpur and beyond. We had planned to reach Deoghar by 8 pm and spend the night there in a hotel. But the Ambassador we were travelling in broke down thrice and around midnight we found ourselves still a 100 km from Deoghar. We had offered a ride to two Muslim brothers who lived in that area and they had travelled with us for the past several hours. The idea was to chat during the drive and learn more about people, politics and the economy.