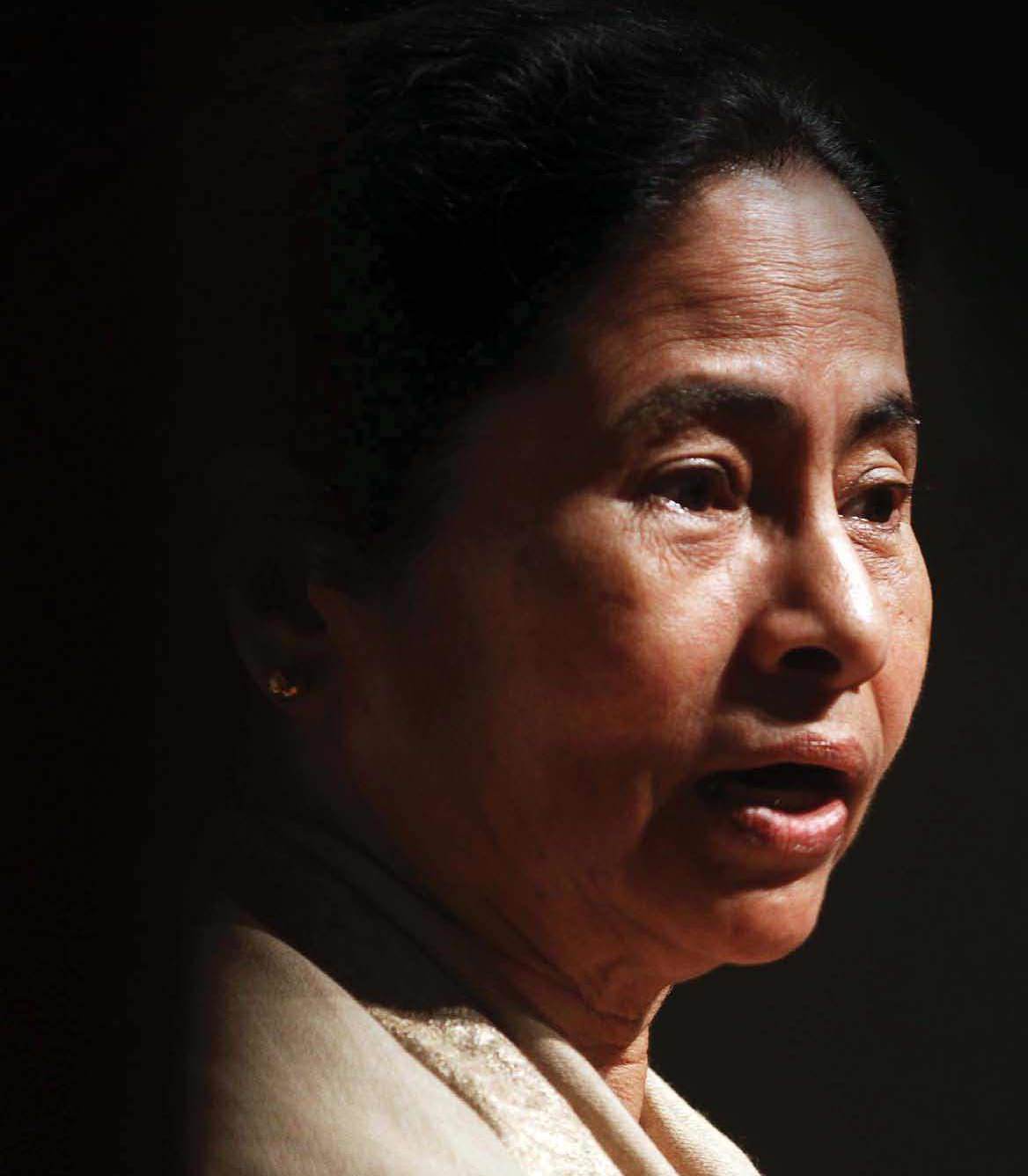 Mamata Banerjee is unfazed by the advantage the CPM-Congress combine has in terms of electoral math. 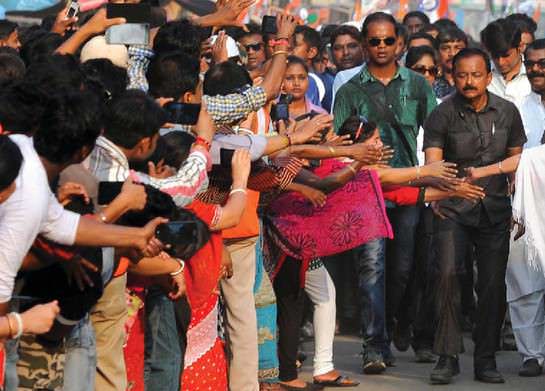 At 1:15 pm on 8 April, Mamata Banerjee arrived in her Hyundai Santro at the Directorate of Land Records & Surveys in South Kolkata’s Alipore area. She would have been pleased, it appeared, if the car had been even smaller, like a Nano, the cheapest Indian car. After all, the West Bengal Chief Minister’s efforts to sustain an image of austerity are legion. She emerged from the car in an inexpensive white sari and bathroom slippers, as adoring crowds craned their necks to get a glimpse of the diminutive leader, and police and senior Trinamool Congress (TMC) colleagues struggled to keep pace with the 61-year-old who darted into the government office to file her nomination papers to contest South Kolkata’s Bhabanipur Assembly seat, from where she had won a bypoll by a landslide five years ago.

Wait. Has she lost the spring in her step? Has her aggression mellowed a bit? Does her smile have a perfunctory air? Has she let herself be swayed by talk that she would win but with a reduced margin? Or that the CPM-Congress tie-up could give her a tough fight for Muslim votes, her core constituency? Or is she rattled by a swift change in perception in the past five months about her invincibility? Is she losing sleep over allegations of graft, links of party leaders with mafia groups and the media outcry? Or is she upset about not meeting numerous promises, including the return of land to Singur’s farmers who had backed her in a massive agitation in 2008 to get Tata Motors to shift its Nano car factory out of West Bengal?

“No comment,” she replied, to a question whether corruption would be a major factor in this election, as she walked back to her silver-coloured, unadorned car with the number plate ‘WB02 AD 5555’, after filing the papers. Her government has been hurtling from one scam to another. The Trinamool Congress’ widely publicised poll catchphrase, ‘Shototar protik’ (symbol of honesty), has a touch of irony to it: several of its leaders are reportedly involved in the Rs 2,460 crore Saradha ponzi scheme, run by a conglomeration of 200 companies, which offered lucrative schemes to raise hundreds of crores from 1.7 million depositors before it collapsed in April 2013. Saradha’s annual collections had risen rapidly when Mamata Banerjee was Chief Minister. The group had also spent crores of rupees on cycles and ambulances that she distributed in rural Bengal, especially in tribal areas such as Jangalmahal and Muslim-dominated pockets like Birbhum and Malda. To add to the anguish, a recent sting operation by news website Narada caught 11 TMC leaders on camera accepting bribes in return for favours to a fictitious company. “From Saradha to Narada, their record is pathetic and shameful,” says an enthusiastic Mohammed Salim, a Politburo member of the CPM, adding that Mamata “is a deeply worried person”.

A senior TMC leader, however, tells me that ‘Didi’, as she is popularly known, is only ‘fatigued’ by the long-drawn election campaign. “It is mere physical exhaustion,” he insists, “See, antiincumbency sentiment is not strong enough to unseat her, and the rivals are opportunists; the CPM and the Congress had no reason to come together other than out of sheer desperation.” He asks not to be named because he is not authorised to speak to the media ever since a flyover on Vivekananda Road in Kolkata’s Girish Park area collapsed on 31 March, killing several people; it emerged later that the kingpins of so-called ‘supply syndicates’, which provide raw materials of dodgy quality to builders, ‘report’ to Trinamool men.

Members of the state cabinet express confidence in the party’s re-election chances too. Amit Mitra, the amiable finance minister of West Bengal, asks me to see for myself the development his party has brought about in the state. 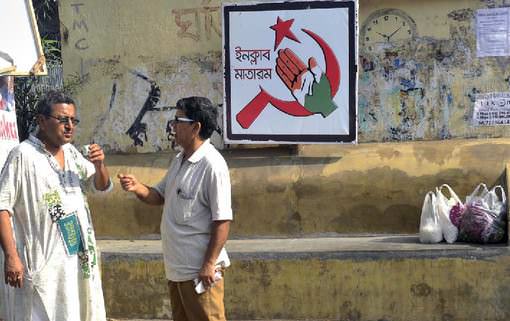 London school of Economics Professor Sumantra Bose, who has for decades followed elections closely in the state, agrees with the TMC leader’s view that people have no compelling reasons to elect the CPM alliance. Bose, author of Transforming India: Challenges to the World’s Largest Democracy, explains, “The people of West Bengal are—to state an obvious but important point—electing a government, and a chief minister. This is where the CPM-Congress alliance has a basic credibility deficit. The alliance is based on sheer negativity, and on antipathy to one person—Mamata Banerjee. This kind of negative gang-up can work if the incumbent is overwhelmingly unpopular, and that is not the case with Mamata and the Trinamool Congress regime.”

Notwithstanding audacious forecasts by the likes of CPM’s Salim that TMC won’t secure more than 140 seats in the 294-member West Bengal Assembly, Bose could be right about the logic that people have against voting the CPM to power. True, the ruling party is disliked for its ‘Syndicate Raj’, but memories of the CPM’s arm-twisting, intrusive ways persist.

As I tour key constituencies of the state, striking up conversations with voters, they appear a tad confused about re-electing a government seen as corrupt, one which connives in the activities of gangsters who call the shots in many parts. At the same time, they are perhaps more concerned about giving another chance to a party that ruled the state for 34 years straight until 2011 (first 23 years under Chief Minister Jyoti Basu and 11 years under Buddhadeb Bhattacharjee), patronising corrupt elements and remote-controlling criminal gangs, especially through the 1990s. While some CPM leaders hope that voters will switch allegiance this time too, having got used to the idea five years ago, the TMC expects the electorate to appreciate its populist policies.

In Frasergunj, the scenic spot in the Sundarbans named after Sir Andrew Fraser (who was Lieutenant Governor of Bengal from 1903 to 1908), Nonch Doloi, a thin, gawky fisherman, tells me that his life hasn’t changed even a bit after voting for change in 2011. His answers are mostly in monosyllables, and he isn’t sure if he should vote against the party in power. “Sometimes I think the CPM was better than Trinamool,” he says. Yet, he isn’t absolutely sure whom to back this time. “I will definitely vote, maybe for the CPM. Maybe for Trinamool,” he looks away. Anil Das, another fisherman at the fishing harbour nearby, not far from the windmills that dot the landscape, says that the ruling party may return to power, but he will vote for the CPM this time. Not far away in Kakdwip, Chand Rai, a resident who makes a living lending small movie projectors for people to watch films in a place where migrant workers come and go, says he hopes Didi will do well if she is given another term. “But I will look at local factors before I vote,” adds this 32-year-old. Ramaprasad, a tea seller in Kulpi, says he has been a traditional Trinamool voter. “There are many problems with the current government, but that doesn’t mean I will vote for change,” he offers. He acknowledges that the de facto alliance between the CPM and the Congress is largely a people’s alliance because it was at the grassroots level that they both came together to fight the ‘excesses’ of TMC cadres. “TMC was doing what the CPM had done for long,” he says.