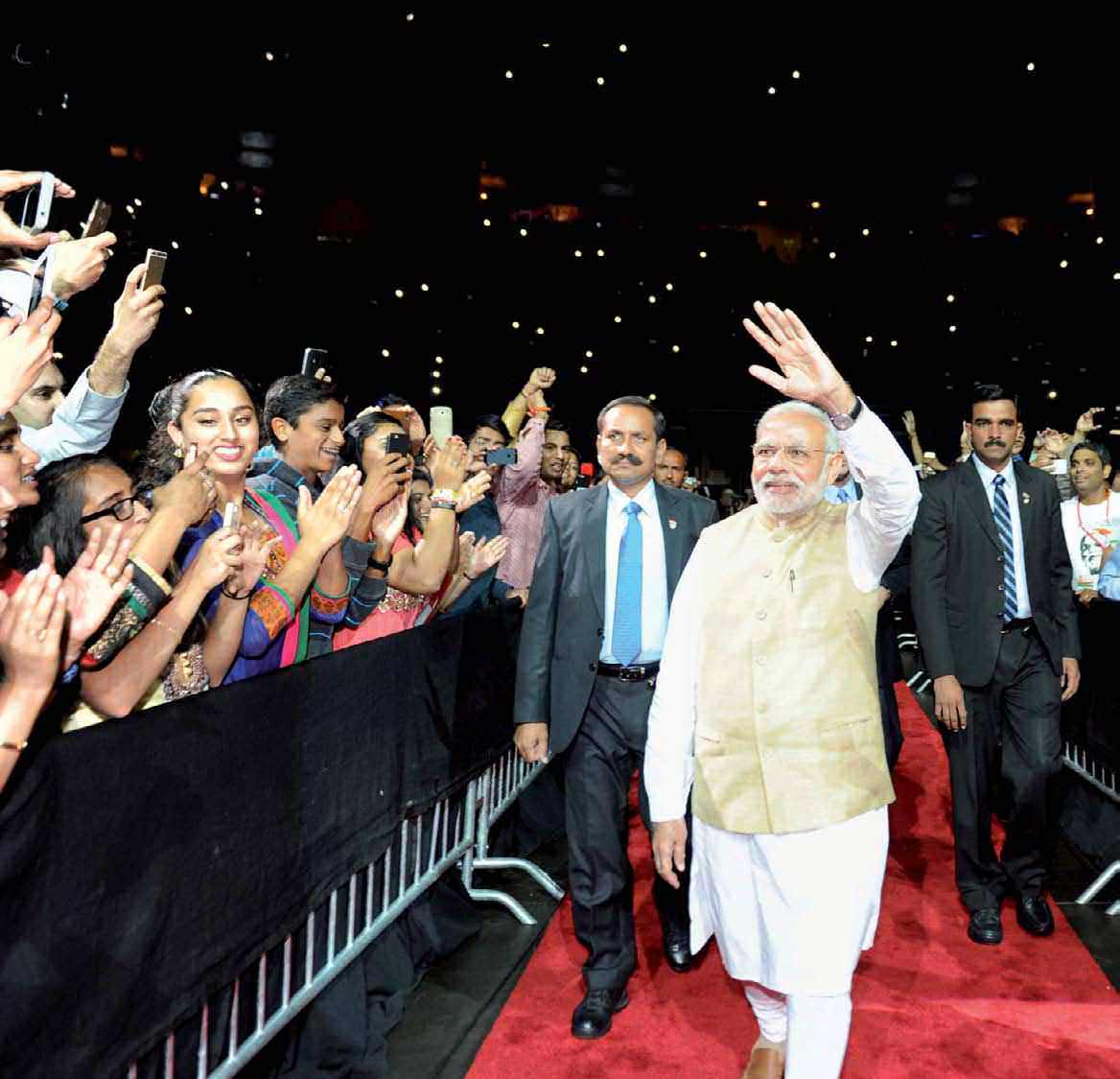 ​The salad plates have just been cleared and the green tang of cilantro lingers in the air, somewhat at odds with the summer blooms atop the tables. Gathered for a special dinner this Saturday night, at a hotel in San Jose less than 5 miles from the airport, over 300 movers and shakers of Silicon Valley are awaiting the arrival of the star ingredient from India. By the time Prime Minister Narendra Modi breezes in, attired in a light brown bandgala suit, and takes his place onstage among a handful of illustrious Indians, this is already starting to look like a winning recipe. Adobe Systems CEO Shantanu Narayen, sporting a beard, hails the historic visit; Microsoft CEO Satya Nadella talks of making data, analytics and cloud services available to municipalities and students in Surat; Qualcomm Executive Chairman Paul E Jacobs announces a $150 million fund for Indian startups; the unassuming Sundar Pichai promises Google will connect hundreds of millions of Indians and add support for Indic languages including Gujarati; John Chambers, executive chairman and former CEO of Cisco Systems, reposes faith in Modi to “change the world and change India”. On their own, they are all perfectly good speeches, inspired, perhaps a little too readily, by the idea of a resurgent India. But there is a sense that the best is yet to come—from the man who, these smartest of executives believe, will help India meet its digital future.

As Modi takes the podium, many in the room, including Indians, reach for their headsets, resigned to an English interpretation of his address. At table 12, Vish Mishra, an entrepreneur, mentor, investor and among the best-connected Indians in the Valley, jokingly offers his translation services. As it turns out, nobody will be needing them. For Modi speaks in pithy English, eliciting surprise and applause. “I am sure this was not prearranged. But, here on stage, you see a perfect picture of India-US partnership in the digital economy,” he says. “It is not even his second language,” Mishra, a founding member of The Indus Entrepreneurs, a global nonprofit that promotes entrepreneurship, exclaims to a young man at the table that also seats Valley veteran Ram Reddy, a serial entrepreneur and active investor in startups here. Everyone looks impressed. On top of Modi’s relentless pursuit of technology, English gives him a contemporary gloss they clearly did not expect from a prime minister who hails from modest means.

So what does Silicon Valley see in Modi? The idolatry is partly because he is a self-made man, like every other Indian here. To intuit the aura of Modi in California, I linger for the better part of the Sunday morning in the bustling lobby of the Fairmont, while he is away at Facebook making hundreds of adults tear up with his choked-back answer to Mark Zuckerberg’s question about his mother. This weekend, the hotel, across the street from the Tech Museum of Innovation in downtown San Jose, is witnessing the pageantry of Modi’s coronation as auteur of a new, digitised India. “For the first time after Independence, India has an opportunity to find its real identity,” says VA Shiva Ayyadurai, an entrepreneur from Cambridge, Massachusetts, whose claim to fame is the ‘invention’ of email. As a teenager living in New Jersey, Ayyadurai, a Tamil born in Mumbai, devised an electronic mail system, a version of which would later become famous as e-mail. Despite several degrees from MIT and an aggressive PR campaign, he never quite managed to get the stamp of legitimacy, allegedly because of racist sentiments within the American science and tech community. “The colonialists brainwashed Indians to think that they could only be good workers. Modi is talking about innovation and startups. He is an entrepreneur in a sense, an outsider who started out with nothing. Things were not given to this individual. I think people in the Valley identify with this,” says Ayyadurai, a well-tailored butterfly flitting among confréres from television channels.

By virtue of being Indian, I am directed to the imposing stairs and escalators on either side of the lobby leading to the upper floor, the site of much action today. Later in the day, in one of its halls, an exhibit by over 30 startups from India, including a path-breaking preventive eye care product, will vie for the Prime Minister’s attention. Another will host a roundtable on renewable energy, the second focus area of Modi’s visit to California. Ahead of the meeting, a chatty official from the US Embassy in India tells me in a conspiratorial tone that Chinese President Xi Jinping’s first visit to the US appears ‘downright frosty’ compared to the pliant, amicable posturing of Modi. “Everyone knows Modi is one man trying to change things, and with many states soon going to the polls, we cannot expect much reform. Yet, there is hope like never before,” he says.