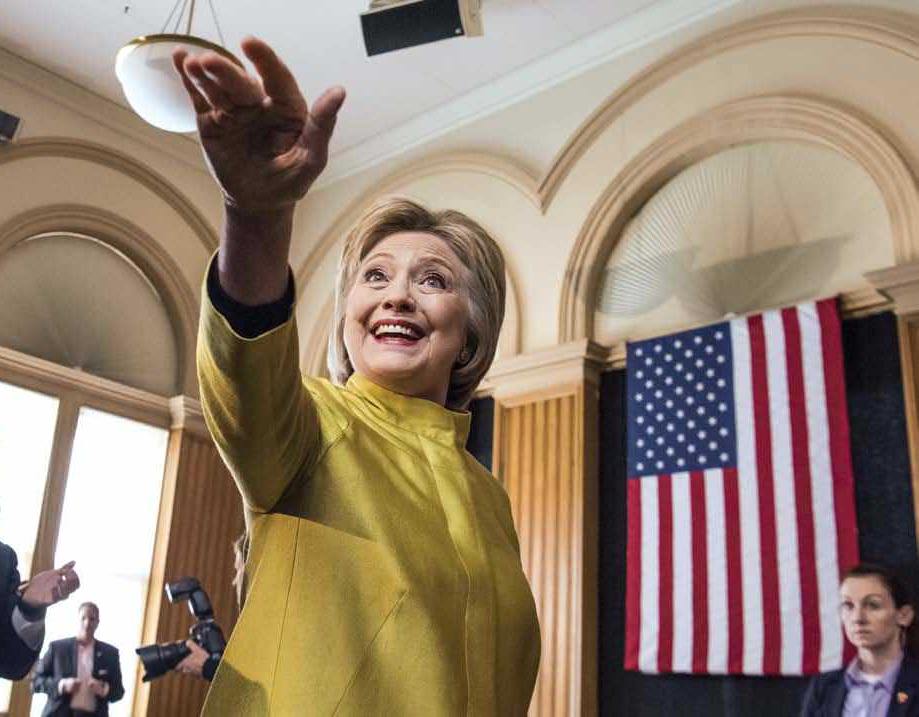 In spite of the trust deficit, it's time for Clinton dynasty's tryst with the White House.

It has been the most violent, distasteful and at times maddeningly puerile drama in America's recent political history. No wonder the Republican primary contest has dominated headlines, in America and everywhere.

In just the past few days, a naked picture of Donald Trump’s wife was circulated by a group linked to the Republican front-runner’s main challenger, ted Cruz, under the headline: ‘Meet Melania trump. Your next First Lady’. trump responded by vowing to “spill the beans” on Cruz’s wife, Heidi, whatever that might mean. he then sought to denigrate Mrs Cruz’s looks by retweeting an unflattering picture of her alongside another shot of Melania, a former model. Cruz called his rival a “snivelling coward”. trump’s campaign manager, Corey Lewandowski, was meanwhile arrested for assaulting a female journalist. the lawyer hired to defend him, it transpired, had himself been accused of biting a stripper. It was just another week on the Republican trail.

Much less attention is being paid to the Democratic primary contest, which is unsurprising. Pitting Hillary Clinton, a veteran of three decades in public life, against Bernie Sanders, a left-wing challenger who, despite his reputation for being a plain-speaking outsider, has served in the Us Congress for almost as long, it is less titillating. Republican televised debates have been absurd three-hour slug-fests, in which trump has insulted his rivals—“Lyin’ ted Cruz”, he calls his challenger—and talked up the size of his penis. the Democratic debates have, by contrast, been dust-dry discussions of policy, in which Clinton and sanders have talked economic theory, immigration rules and often bored their—much smaller—television audiences rigid. Yet their contest, which Clinton is well on her way to winning, is in a way far more important than the circus on the right, for the simple reason that it looks likelier to produce, in November, America's next president.

That would represent a third consecutive presidential victory for the Democrats, a momentous achievement. America's political parties rarely win three terms on-the-trot— the Democrats have only managed it twice since 1828. and a popular demand for change, primarily motivated by years of slow wage-growth, made it look all the more unlikely that they would repeat the feat this year; 65 per cent of Americans think their country is on the wrong track. such a rating, in normal times, would make it extraordinarily hard for an incumbent party to retain power—even if it were in better shape than the Democratic party is.

After six years of gridlock in Congress, the Democratic Party machine is creaking with neglect. Its intellectual reserves are similarly depleted; for a centre-left party, it appears to have given remarkably little attention to the income inequality firing much of Americans’ discontent. “Just saying we’ve got to fight for children, and that when women succeed, we all succeed... it’s true, but it’s not new or exciting to the electorate,” laments a Democratic lawmaker.

Neither is Clinton new or exciting; nor is she loved. beset by old scandals, a fudgy platform and fresh doubts about her ability to enthuse an electorate that hates establishment politics and distrusts her particularly, she is one of the least regarded politicians in America. around six in 10 Americans distrust her. that is a level of disdain which, again, in normal times, would virtually bar her from the White house; no one has become president with negative trust ratings. they also go some way to explaining sanders’ surprisingly strong showing in the Democratic primaries hitherto.