Donald Trump, From A To Z 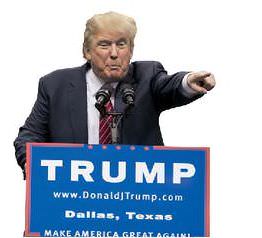 An alphabetical portrait of the frontrunner in the race for the Republican Party's presidential nomination.

Coarse as hell, bombastic and misogynist, a blunt-spoken nativist with an almost cartoon arrogance, Donald Trump offers the textbook picture of a candidate unsuited to any elective office—however picayune— in the world’s most politically correct democracy. And yet he’s the clear (and effortless) frontrunner in the mucky marathon race for the Republican Party’s presidential nomination.

This reflects not merely the famine in the Republican field, but also the defeatism that has paralysed the party—a collective resignation to a rout in 2016 that has mutated into a theatre of the grotesque, with Trump as the rampant (but ultimately impotent) anti-hero. For those of you who are transfixed, here’s a brief Trump Primer:

A is for ’merica (the ‘A’ is silent), where aliens from across the southern border flock to have their anchor-babies, children with a right to US citizenship that Trump would seek to deny (the pesky Constitution notwithstanding).

B is for braggadocious, an adjective used by a gleeful Trump to describe himself in his opening statement in the last presidential debate. Contrary to popular media belief (and most likely his own), he didn’t invent the word.

C is for China, China, China, Trump’s one-country foreign policy. “Their leaders are much smarter than our leaders,” he has lamented loudly. “China in a trade deal? They kill us.” But things will change when he’s in charge: “I beat China all the time. All the time.” At least his bouffant is better than Xi Jinping’s.

D is for Democrat: he was one, before he switched sides. And debates, where his bare knuckles give him a certain advantage. And daughter—or dating, or dating your daughter. “If Ivanka weren’t my daughter, perhaps I’d be dating her.” He said that in jest; but I wager Ivanka was glad—for once—that she was his offspring.

E is for ego. Which requires no further comment than Trump’s own: “Show me someone without an ego and I’ll show you a loser…”

F is for Carly Fiorina and her face, which Trump disparaged in words that were uncouth and witless. “Look at that face! Would anyone vote for that?” he said of his only female Republican rival—prompting her to shame him in the last debate, and confirm the truth of that old aphorism about a woman scorned.