The Paradox of the First Black President 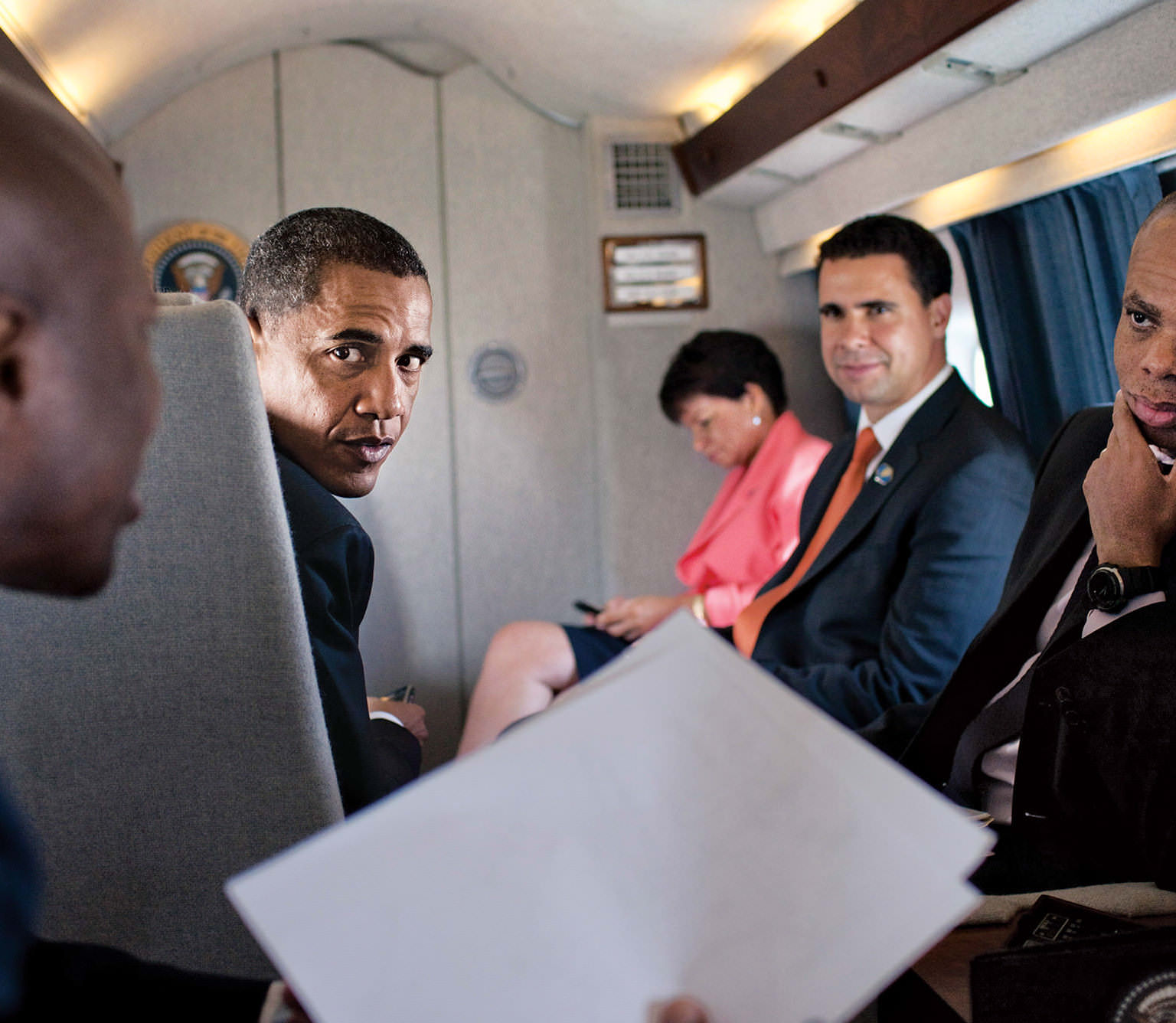 As the historic administration nears its final year, African-American leaders debate: Did Barack Obama do enough for his own community?

THERE IS A PHOTO BY Pete Souza, the White House’s canny and peripatetic photographer, that surfaces from time to time online. The setting is Marine One, and it features a modest cast of five. Valerie Jarrett, dressed in a suit of blazing pink, is staring at her cell phone. Barack Obama, twisted around in his seat, is listening to a conversation between his then–body guy, Reggie Love, and Patrick Gaspard, one of his then–top advisers. Obama’s former deputy press secretary, Bill Burton, is looking on too, with just the mildest hint of a grin on his face.

In many ways, it’s a banal shot—just another photo for the White House Instagram feed, showing the president and his aides busily attending to matters of state. Stare at it a second longer, though, and a subtle distinction comes into focus: Everyone onboard is black. “We joked that it was Soul Plane,” says Burton. “And we’ve often joked about it since—that it was the first time in history only black people were on that helicopter.”

Souza snapped that shot on August 9, 2010, but it didn’t make any prominent appearances in the mainstream press until mid-2012, when it appeared in The New York Times Magazine. The following summer, July 2013, the president had a group of civil-rights leaders come visit him in the Roosevelt Room of the White House, and the optics, as they like to say in politics, were similar: An all-star cast of minorities (African-American and Latino this time) gathered in a historic place to which the barriers to entry were once insuperably high.

But this was not a meeting the participants laughed about afterward. When Obama opened up the floor, everyone spoke about what they’d witnessed in the 2012 election: how states that limited voter-registration drives and early-voting initiatives had left many African-Americans off the rolls; how strict new laws concerning IDs had prevented many minorities from voting and created hours-long lines at the polls. The answer was clear: legislation to restore the Voting Rights Act. The Supreme Court had just overturned a key provision of the landmark civil-rights legislation the month before.

But Obama’s response was equally clear: Nothing could be done. Not in this political climate, not under these circumstances. Congress would never allow it. The group was stunned. As they’d stumped for Obama, one of the many talking points they’d used to turn out the black vote was the threat of disenfranchisement, the possibility that the Voting Rights Act was in jeopardy. Yet here was Obama telling them that a bill addressing this vital issue didn’t stand a chance.

These proximal events—the publication of a historic photo in a major news outlet, a demoralizing discussion about the prospects of amending our voting laws—may seem unrelated. But to many who’ve watched this White House for the last six and three-quarter years, particularly with an eye toward race, the two events are finely intertwined. They would more likely say: One cannot have that photo without a massive reaction to that photo. In a country whose basic genetic blueprint includes the same crooked mutations that made slavery and Jim Crow possible, it is not possible to have a black president surrounded by black aides on Marine One without paying a price. And the price that Obama has had to pay— and, more important, that African-Americans have had to pay—is one of caution, moderation, and at times compromised policies: The first black president could do only so much, and say only so much, on behalf of other African- Americans. That is the bittersweet irony of the first black presidency.

But now, as Obama’s presidency draws to a close, AfricanAmerican intellectuals and civil-rights leaders have grown increasingly vocal in their discontents. They frame them, for the most part, with love and respect. But current events have broken their hearts and stretched their patience. A proliferation of videos documenting the murders of unarmed black men and women—by the very people charged with their safety—has given rise to a whole movement defined by three words and a hashtag: #BlackLivesMatter. “That’s one of the fundamental paradoxes of Obama’s presidency—that we have the Black Lives Matter movement under a black president,” says Fredrick Harris, a political scientist at Columbia University. “Your man is in office, and you have this whole movement around criminal-justice reform asserting black people’s humanity?”

Obama is hardly uncomprehending of these concerns. One can hear it in his rhetoric on race these days, which has become much more lyrical, personal, explicit. “Amazing Grace,” he sang in Charleston. “Racism, we are not cured of,” he told Marc Maron, “and it’s not just a matter of it not being polite to say ‘n-----’ in public,” using the full word. This summer, Obama visited a prison, the first president to do so, and commuted the sentences of 46 nonviolent drug offenders. Last year, he started the My Brother’s Keeper initiative, which zeros in on programs within federal agencies that can help young men of color. He is now trying, with the improbable cooperation of congressional Republicans, to pass a bill on criminal-justice reform.

Still, the question many African-American leaders are now asking is what his efforts will amount to, and whether they’re sufficient. At a panel about African-American millennials in August, the journalist Charlayne Hunter-Gault made note of Obama’s recent emphasis on race matters and asked the group if it was “too little, too late.” Their responses, not surprisingly, were mixed. At the Aspen Ideas Festival this summer, Jarrett fielded a similar question from Walter Isaacson, the writer and head of the Aspen Institute. He noted that some Americans thought Obama publicly engaged with issues of race only “halfway.” Her reply was swift, pointed, and poignant. “I think you have to ask yourself: Why is that all on him?”

Going into the Oval Office, Obama had given one of the most extraordinary speeches about race this country had ever heard from a politician. Granted, he’d had no choice: His former pastor, the Reverend Jeremiah Wright, had preached a sermon in 2003 that included the words “God damn America,” which were inconveniently caught on videotape. But Obama’s response—a 37-minute speech in Philadelphia that patiently put these words in historical context—was risky, audacious, possibly even contraindicated. “There were many cowardly ways to handle that situation,” says Van Jones, Obama’s former special adviser for green jobs, “but he chose the most courageous one.” The speech got 1.2 million hits within the first 24 hours of being posted on YouTube.

What one says as a candidate is one thing; what one says as president is another. Six months into Obama’s tenure, a reporter asked the president what he thought of the arrest of Harvard’s Henry Louis Gates Jr., one of the most famous African-American intellectuals in the United States, who had been taken into custody for trying to unstick the stubborn front door of his own home. Obama replied that although he didn’t have all the facts, he thought the Cambridge police had “acted stupidly.” Within minutes, the world seemed to come off its hinges, with Fox and its cousins—even some of its inlaws in the mainstream press— declaiming that Obama had insufficient respect for law enforcement. Obama dialed back his comments, proposing that Gates and the police officer meet at the White House over beers.