The Attorney General Isn’t Giving In To Fear 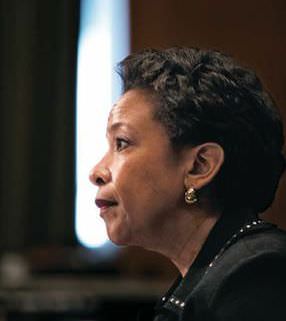 The attorney general isn’t giving in to fear.

On January 4 before Obama announced he was forging ahead with gun-control measures despite opposition in Congress, before his tearful East Room speech and the town-hall meeting where he tried to convince the public that he was not trying to take away their guns the president welcomed a handful of reporters into the Oval Office. In the wake of the San Bernardino shootings, he told the reporters, he had asked his top law-enforcement official, Attorney General Loretta Lynch, along with her deputies and White House personnel, to submit recommendations about what he could do to fight gun violence via executive action. He had since received the report, he said, and was prepared to act on the recommendations.

Lynch, who was seated directly to his right, said nothing while the cameras clicked. In the brief clip that ran on networks, the cameras zoomed in on the president’s face, cutting her completely out of view. She appeared at the East Room event the next day, again off-camera. When the president conducted his live town hall later that week, she was absent. Staying out of the spotlight has been as much professional strategy as personality trait for Lynch, who may be the lowest-profile attorney general in recent memory. Over the course of a long career in the U.S. Attorney’s office in the Eastern District of New York, she managed to ascend to the top law-enforcement position in America without arousing much attention or creating controversy.

But the Obama-Lynch tableau will almost certainly become more familiar in the days ahead, because the president’s new gun-control proposals will be the greatest test of her short time in office. The crux of Obama’s new policy is, for the most part, merely a clarification of current law: Gun sellers, or those “engaged in the business” of selling firearms, are required to run background checks— including online and gun-show sellers, who have previously claimed that they’re exempt, and who have historically been left alone by law enforcement. Those who fail to run background checks are subject to prosecution. Which means that it’s up to Lynch, and the Department of Justice, to prosecute the offenders.

If she does bring charges against negligent gun sellers, she will likely face a massive backlash. Already, Rand Paul is promising to fight the orders “tooth and nail”; House Speaker Paul Ryan is declaring that “the country will not stand for it”; Ted Cruz’s presidential campaign is soliciting support using an image of the president looking vaguely like a member of the uniformed Waffen SS. On a conference call the night before Obama’s announcement, Lynch told reporters that the new directive would “help individuals who do want to comply” while also putting “everyone else on notice that if they don’t comply, there will be consequences.”

Gun control is by no means the only issue for which Obama is relying on the legal maneuvering of the Department of Justice to safeguard his agenda. The White House’s terrorism, national-security, hate-speech, corporate-crime, civil-forfeiture, and refugee policies all flow through the office of the attorney general. In other words, with just a year left in his administration, no one will be more central to the president’s political ambitions and legacy than Lynch.

When I asked Lynch in late December, in the Justice Department offices, beneath looming portraits of Eric Holder and Robert F. Kennedy and Janet Reno,how she could possibly manage all of her priorities in such a short time, she was characteristically measured: “These issues are not administration-specific. They themselves don’t have a deadline or a timetable,” she said. “My goal is to position the department where it will carry on in all of these issues long after myself and my team have moved on.” When I later pressed her on the pressures of the job, she said more plaintively: “You take the job as you find it.”