Sheldon Adelson Is Ready to Buy the Presidency 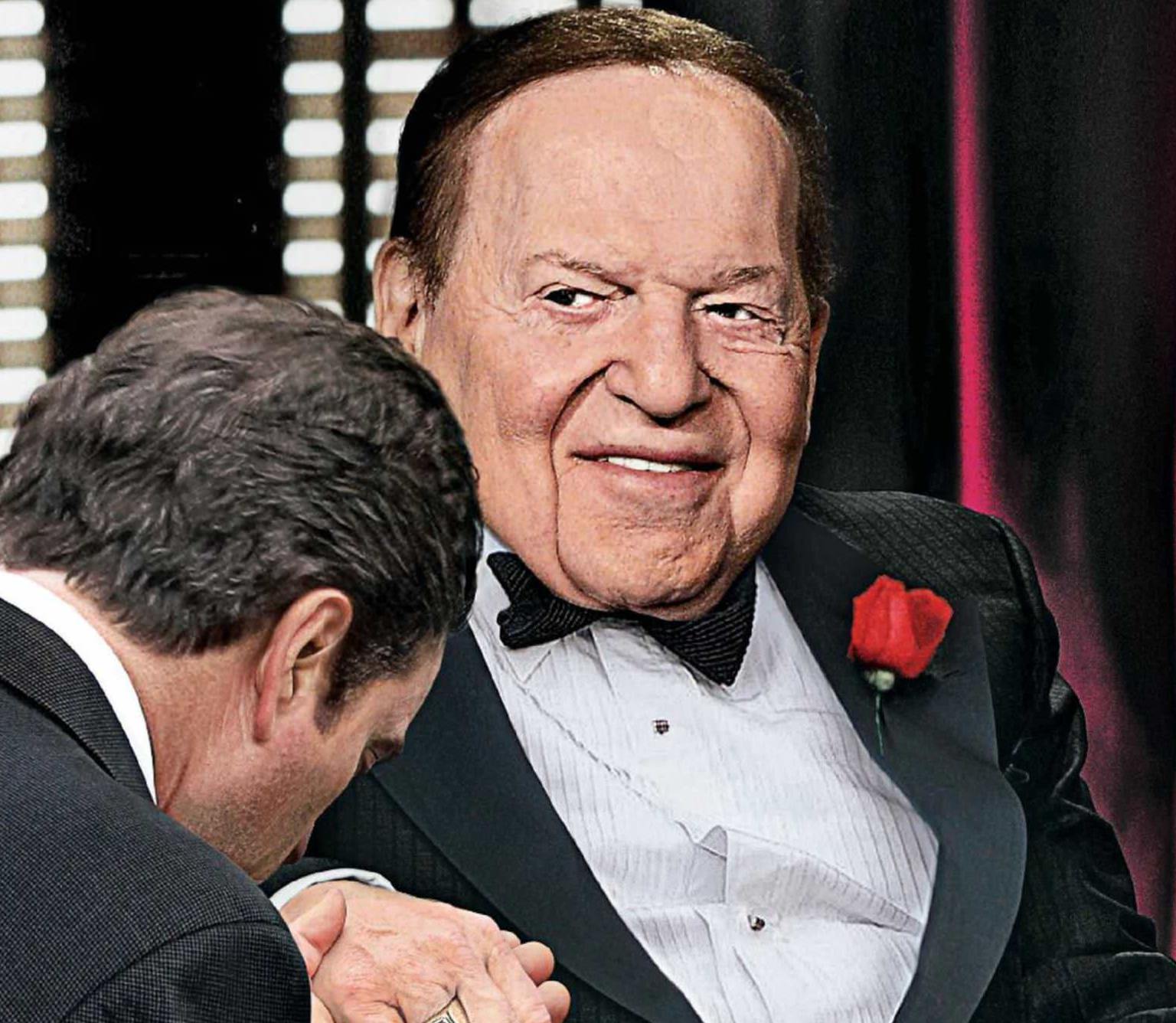 He just hasn't decided which Republican candidate to back. Care to make a pitch?

In a few weeks, when the nuclear deal Barack Obama negotiated with Iran comes before Congress, it’s all but certain that not a single Republican will vote in support of it. With the possible exception of Maine’s Susan Collins, who has yet to reveal her position, each of the 246 Republicans in the House and 53 Republicans in the Senate has indicated his or her opposition to the deal. Not that a mere vote could possibly express the intensity of even that unanimous opposition—or the fervid support for Israel that lies behind it. “It is a fundamental betrayal of the security of the United States and of our closest allies, first and foremost Israel,” Texas senator and GOP presidential candidate Ted Cruz has said. Cruz’s 16 Republican-primary opponents have denounced the deal in similar terms. One of them, Mike Huckabee, has gone so far as to argue that Obama “will take the Israelis and march them to the door of the oven.” ¶ American Jews are not hard-liners on Israel. Obama won 69 percent of Jewish voters in 2012, even as American conservatives accused him of purposefully undermining the country’s security and status in the region. Indeed, according to a 2013 Pew study, only one in three American Jews feel a strong emotional attachment to the Jewish state. But over the past 30 years, and especially in the last decade, the GOP’s attachment to Israel has become remarkably fierce, to an extent that is basically unprecedented in modern American politics. On issue after issue—from military aid to settlement policy—the GOP now offers Israel unconditional and unquestioning support, so much so that some Republicans now liken the country to America’s “51st state.” The person most responsible for this development is the multi billionaire casino magnate and Republican megadonor Sheldon Adelson.

Adelson, who grew up poor in the Dorchester section of Boston and never graduated from college, made and lost several fortunes before he struck it rich for good in 1979 by developing the Las Vegas computer trade show Comdex with a few partners. Ten years later, Adelson and his partners spent $128 million to buy Las Vegas’s Sands Hotel and Casino, which he used as a toehold to steadily expand his—and the company’s—gaming operations. Today, the Las Vegas Sands Corporation, of which Adelson is, at 82, still the chairman and CEO, is a publicly traded company with massive hotels and casinos in Las Vegas, Pennsylvania, China, and Singapore. According to Forbes, Adelson, who owns a majority of Sands stock, is worth about $26 billion; he is said to keep close tabs on where he ranks on the magazine’s listing of billionaires, which is calculated daily, mentioning to associates when he has moved up. And although his ranking has slipped a bit in recent years—once in the top ten, he is currently 18th on that list—Adelson has been known to boast that he is still “the richest Jew in the world.”

As such, he is unaccustomed to being ignored. Among the 17 candidates currently vying for the Republican presidential nomination, most are also competing in the “Adelson primary”: the hotly contested race for the donor’s heart, which runs through Israel. Adelson’s support for the Jewish state is so intense that he opposes American efforts to broker a two-state solution to the Israeli-Palestinian conflict, arguing that the Palestinians are “an invented people” whose “purpose … is to destroy Israel”; rather than negotiate with Iran, Adelson has called for a preemptive nuclear strike against the Islamic Republic. The stakes of getting on his good side are enormous. In 2012, Adelson spent $20 million supporting Newt Gingrich, single-handedly keeping him afloat during the primaries and doing great damage to Mitt Romney in the process; then, after Gingrich finally fell, Adelson shelled out $30 million to plump up Romney. All told, Adelson reportedly spent $100 million against Obama in 2012. In 2016, says one prominent Republican operative, “every candidate thinks, I can either be the Gingrich of the cycle, meaning Sheldon could give me oxygen, or I don’t want to be on the opposite side of who his Gingrich is this cycle. They want to benefit from Sheldon’s largesse or make sure no one else benefits from it.”

Adelson has suffered from a neurological condition affecting his legs that often confines him to an electric scooter and can make leaving Las Vegas a burden. So the candidates go to him. In his office at the Venetian Hotel, accessed via an inconspicuous elevator just off the casino floor, Adelson receives a steady stream of presidential hopefuls. “Can you think of worse optics for Jews than having the casino magnate sitting out in Vegas and having all these Republican candidates schlep out to see him and kiss his ring?” frets one prominent Jewish Republican. And when the candidates aren’t physically visiting Adelson, they’re keeping close to him in other ways. Marco Rubio reportedly phones Adelson every other week. “Rubio calls and says, ‘Hey, did you see this speech? Did you see my floor statement on Iran? What do you think I should do about this issue?’ ” says one person close to Adelson. “It’s impressive. Rubio is persistent.” Lindsey Graham is said to call almost as often. When Scott Walker took his first trip to Israel, in May, he did so aboard one of Adelson’s airplanes. Adelson loves the attention, but with such a crowded 2016 field, even he occasionally gets worn out. After Ben Carson paid him a visit in Las Vegas earlier this year, Adelson complained to a friend, “There are too many candidates!”

Naturally, there are complaints about Adelson, too. The New York Times’s Thomas Friedman has written that Adelson “personifies everything that is poisoning our democracy and Israel’s today.” But more interesting than liberal gripes are the grievances of those who share Adelson’s ideological convictions, many of whom consider him more of a bomb-thrower than an institution-builder. Despite his enormous wealth, not to mention more than 65,000 employees, the billionaire’s political operation is decidedly mom-and-pop. Besides his wife and an elderly secretary named Betty Yurcich, who has trouble using the web, Adelson has little in the way of an actual organization; until recently, visitors to his personal office had to watch where they stepped, as Yurcich’s tiny dog was a frequent presence and occasionally soiled the carpeting. (The dog died last month.) “Look at the Koch brothers, who have this enormous infrastructure,” says one Republican operative. “For better or worse, when they start going in a direction, they keep going. It’s a supertanker. It’s got a whole crew, and it takes a team to turn it. With Sheldon, there’s no process, no system, no team, no bureaucracy, no nothing. It’s just him and his wife.” Those who receive money from Adelson typically do so only after meeting with him personally, and he has been known to abruptly and capriciously cut off funding for an offense as minor as a quote in a newspaper article that he didn’t like. In the business world, “he’s been enormously successful by having the right instincts combined with a sheer decisiveness and willingness to tell everyone basically to fuck themselves,” explains another person who has worked with Adelson. “The political world is not quite like that. You have to bring people around to your position. You have to work with people, you have to persuade and compromise.”

And you have to be persuadable. In addition to lacking an organization, Adelson lacks advisers, or at least ones whose advice he heeds. Although he frequently kibitzes with leading lights of the conservative and pro-Israel worlds, Adelson, as one of his interlocutors says, “does more talking than listening.” A prominent member of the American Jewish community who has dealt with Adelson complains: “The problem with billionaires is that they don’t have anyone around them to say, ‘Hey, billionaire, you know that really fucking stupid thing you just said? That was really fucking stupid.’ Sheldon especially lacks that person around him.”

“Sheldon’s the rare person who can afford to make a $100 million mistake,” says an occasional adviser. “Why does he fly on a 747? Because he doesn’t like to stop to refuel when he goes to Israel and Singapore. Anything about Sheldon is because he can.”

In the 2016 presidential race, Adelson insists he will not repeat the mistake he made in 2012 of backing a spoiler. “I think he feels guilty,” says one person who has discussed the matter with him. “I think he knows how much he fucked up.” Adelson has told several associates that he will likely not decide on a candidate until he’s had an opportunity to watch a few debates. Jeffrey Wiesenfeld, an Israel advocate who’s friendly with Adelson, says the mogul’s priority this time is to support a candidate who’s electable: “He’ll match his emotionalism on this issue with some hard data. His principles and his desires remain the same, but I think he’s going to balance those with an empirically based judgment on the reality of the marketplace.”

Of course, thanks to Donald Trump, the Republican marketplace is a flaming mess at the moment. The challenge Adelson now faces is determining which candidate stands the best chance of defeating not only Hillary Clinton but also the man whose Las Vegas hotel is just a few clicks down Mel Tormé Way from the Venetian. While Trump boasts that his daughter converted to Judaism and blasts Obama as “the worst enemy of Israel,” his knowledge of the Middle East is sufficiently shallow that Adelson apparently believes Trump wouldn’t be an effective ally of the Jewish state.

But Adelson is also said to be conflicted about the various potential Trump-slayers. Scott Walker, despite intensive lobbying efforts, is viewed by many close to Adelson as insufficiently serious about Israel and foreign policy. (“Look, he’s the governor of Wisconsin,” says Morton Klein, the president of the Adelson-backed Zionist Organization of America. “He knows about cheese and cutting pensions.”) Rubio is a personal favorite but might lack the necessary ruthlessness to take out The Donald. Ted Cruz, meanwhile, is well positioned to appeal to the same GOP primary voters Trump’s currently energizing, but he is probably too conservative to beat Hillary.

Which brings Adelson to Jeb Bush, the candidate who seemingly has the best chance of slaying both Trump and Clinton but whose relationship with the mogul is as vexed as any of the Republican contenders. If Adelson really feels that backing Gingrich over Romney was a mistake in 2012, backing Jeb this time around would be a kind of atonement. But, frustratingly for Adelson, the heir apparent to the Bush dynasty has not always been so eager to play along.