ISIS at the Gyro King 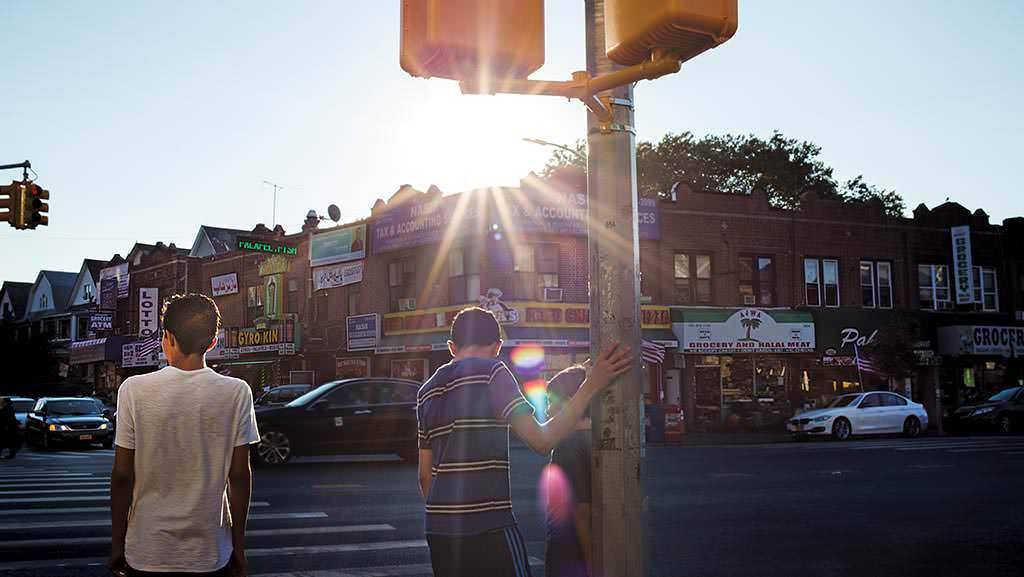 When two young men were arrested en route to Syria, the Uzbeks of Brooklyn felt upset, maligned, and only a little sympathetic.

The Brooklyn Uzbeks seemed to be in a daze, as if they had no idea what had hit them. Immi­grants who’d arrived in New York during the mid­-to­-late aughts, until quite recently they’d hung out on Coney Island Avenue, their days largely filled with the drudgery of working in gyro stands in Midwood and Kensington and selling sunglasses to nonbelievers in tacky suburban malls. This was what they knew of the polluted realm of the kafir. Sometime during 2014, according to federal authorities, the two young Uzbeks charted a different destiny for themselves. They began sending jihadist messages on Uzbek­ language websites and watching videos of holy warriors chopping off heads. They were going to join the Islamic State of Iraq and al­-Sham, or ISIS. They’d get on a plane and go to Turkey, where they hoped “an elder brother” would meet them. From there, they would be escorted to the front lines, where, in the prophetic path of heroes and martyrs, they would engage the armies of the Crusad­ers and their proxies. Next stop was Para­dise, where all people, not just the rich and connected, are free to bathe in rivers of milk, honey, and crystal­-clear water.

This scenario did not come to fruition. On February 25, FBI agents arrested Akhror Saidakhmetov at Kennedy airport just before he was to board a flight to Istanbul. Later that day, Saidakhmetov and his Uzbek friend Abdurasal Juraboev (Saidakhmetov was born in neighboring Kazakhstan but grew up partly in Uzbekistan) stood in a fed­eral courtroom. Juraboev was 24, Saidakh­metov 19, but both of them looked consider­ably younger. Rather than garments of fine silk and bracelets of gold, Juraboev, his black hair in a bowl cut, was attired in a green kufi cap, $3 Chinese slip­on shoes, and a gray hoodie. Saidakhmetov wore red Adidas high­tops, baggy jeans, and a green hoodie, the same clothes he had on when the Feds picked him up at JFK.

Along with their fellow Uzbek and accused co­conspirator Abror Habibov, 30,who was being held in Florida, Juraboev and Saidakhmetov faced charges that they “did knowingly and willfully attempt and conspire to provide material support and resources to a foreign terrorist organiza­tion,” enough to land them in jail for up to 15 years. Instead of dwelling forever in Allah’s heaven, the Uzbeks found them­ selves in an American hell.

For the next few days, Juraboev, Saidakh­metov, and Habibov were worldwide news. TV reporters read at length from the com­plaint against them announced by the office of the then-U.S. Attorney of the Eastern Dis­trict of New York, Loretta Lynch. Saidakh­metov was recorded by an FBI informant saying that if he could not get to Syria, “I will just go and buy a machine gun, an AK­47, go out and shoot all police … It is legal in Amer­ica to carry a gun. We will go and purchase one handgun … then shoot one police officer. Boom. … Then we will go to the FBI head­quarters, kill the FBI people.”

Juraboev, Saidakhmetov’s roommate - they lived in Saidakhmetov’s mother’s Mid­wood apartment - was said to have gotten in touch with his alleged ISIS contact, avowing his willingness to kill “polytheists and infidels … even if that person is Obama!” Should Allah not require such an action, Juraboev offered to plant a bomb on Coney Island. Over the next few months, two more young Uzbeks, Dilkhayot Kasimov and Akmal Zakirov, were added to the case, charged with providing “mate­rial support” in the plot, allegedly putting up money ($1,600, in Kasimov’s case) to help buy Saidakhmetov’s plane ticket to Turkey.

Juraboev and his crew were far from alone in their supposed ardor to join the murder­ous fighters of ISIS. The newspapers have been full of stories of would­-be jihadis lately. Only a few weeks after the arrest of the Uzbeks, two women from Queens were arraigned in the same courtroom. “Why can’t we be some real bad bitches?” Noelle Velent­zas, a 28­-year­-old Puerto Rican, was quoted as saying in the Feds’ complaint. From now on, Velentzas reportedly added, people should refer to her and her soon­-to-­be co­defendant as “citizens of the Islamic State.” The cases caused an uproar. NYPD chief Bill Bratton held press conferences, vowing to meet the threat. Academics, TV commenta­tors, and politicians blamed ISIS’s supposed social­-media wizardry, as if disaffected mod­ern youth had suddenly found themselves so entranced by the jihadists’ punkishly roman­tic goal of repealing 1,300 years of history that they had no choice but to click on “mass murder” instead of a BuzzFeed list.

“This ISIS business is a problem for us, but we want everyone to know it does not define all Uzbeks in this country,” Farhod Sulton told me recently, not for the first time. Since the news broke, Sulton, a 35­-year-­old Tash­kent-­born insurance agent, had become the local go­-to guy on the case. He is the head of Vatandosh, one of the very few Uzbek orga­nizations in the city. Blessed with the dark good looks befitting the far­flung genetic legacy of his homeland, Sulton also speaks English, which the majority of Uzbeks living in Brooklyn don’t.

“We are new here, but we want to show we belong,” Sulton said. This was the pur­pose of today’s Vatandosh­-sponsored activity, a trip down the I­95 corridor to Washington, D.C. “Uzbek immigrants need to realize that America is bigger than just Brooklyn,” he said while the bus crossed the Delaware River, just as George Washington did in 1776.

For the 40 or so Brooklyn Uzbeks on the bus, it had been a long journey. Today, if it rang any bell at all, Uzbekistan was known to most New Yorkers as a dusty (doubly) landlocked ’Stan among other Central Asian ’Stans. Yet Uzbekistan was once a great crossroads of civilization. This was Transoxiana, key pathway of the famous Silk Road, the prime conduit between the ancient marvels of East and West. It was in the fabled cities of present­-day Uzbeki­stan - Khiva, Bukhara, Samarkand, and Tashkent - that Marco Polo stopped to water his camels. Before that, Alexander the Great and Genghis Khan had overrun and ruled the place. Tamerlane rose up from its midst to conquer much of Asia, from Persia to Delhi. More recently came the conquering Turks and the Russians,who in 1924 invented the Uzbek Soviet Socialist Republic, which would last until 1991, when Uzbekistan finally became an independent state.

There are three kinds of Uzbeks in the New York area. There are the Bukharans of Rego Park and Kew Gardens, who are mainly Jews and have done well in real estate and the Diamond District. You can spot the younger Bukharans, who are assimilated into the New York scene, tooling down Queens Boulevard in their hot cars. There are also the “Old Uzbeks,” Muslims who came to the U.S. as refugees from the Soviet Union back in the 1980s. Staunch anti-communists, they have also prospered, with many living in New Jersey’s upwardly mobile Morris County.

“Then there’s us,” Sulton said with a half-smile, pointing to the passengers on the bus.

These are the New Uzbeks, the Brooklyn Uzbeks, the approximately 20,000 Muslim immigrants who grew up in independent Uzbekistan and arrived in New York over the past decade.