BJP: All is not well 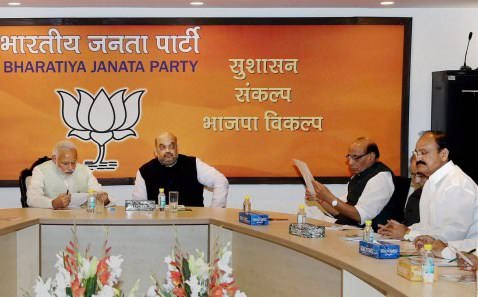 The Bharatiya Janata Party is in a state of flux with party veterans poised to become the rallying point for forces opposed to the  authority of Narendra Modi and Amit Shah, particularly in the wake of the party’s defeat in  the Bihar Assembly elections.

One prominent stream of discussion within the Bharatiya Janata Party (BJP) and the Rashtriya Swayamsewak Sangh (RSS)-led Sangh Parivar hinged on the ramifications of the Bihar verdict for power equations in the party, the Parivar and the Narendra Modi government. The emphasis of these was that the reverses suffered by the BJP and the National Democratic Alliance (NDA) led by it in Bihar would be exploited by sections in the party and the Sangh Parivar outfits to hit out against Modi and BJP president Amit Shah.

However, the speed with which BJP veterans such as former Deputy Prime Minister L.K. Advani and former Union Minister Murli Manohar Joshi came out with an open statement, barely two days after the election results came out, surprised a large number of Sangh Parivar activists and observers. The short but forceful statement, signed by senior party leaders, including former Union Minister Yashwant Sinha and former Himachal Pradesh Chief Minister Shanta Kumar, did not take specific names but there wa doubt about its targets.

Opening with the assertion that “no lesson has been learnt from the fiasco in Delhi”, referring to the crushing defeat of the party in the Assembly elections in February at the hands of the Aam Aadmi Party (AAP), they said: “To say that everyone is responsible for the defeat in Bihar, is to ensure that no one is held responsible. It shows those who would have appropriated credit if the party had won are bent on shrugging off responsibility for the disastrous showing in Bihar. The principal reason for the latest defeat is the way the party has been emasculated in the last year. A thorough review must be done of the reasons for the defeat as well as of the way the party is being forced to kow-tow to a handful, and how its consensual character has been destroyed. This review must not be done by the very persons who have managed and who have been responsible for the campaign in Bihar.”

The statement was perceived within the BJP and the Sangh Parivar as one that worked at different levels. In the immediate context, it was a rebuttal of the BJP Parliamentary Board’s conclusion a day after the announcement of the results that the party would take collective responsibility for the defeat. At a larger level, it directly pointed to the authoritarian hold Modi and Amit Shah have come to have over the BJP since the party’s victory in the Lok Sabha elections in June 2014 and expressed a readiness to take it on in the coming days. Of course, all these leaders also had individual grouses against the Modi-Shah regime in the BJP as they have been systematically sidelined over the past year and a half.