Spain's Man In The Middle 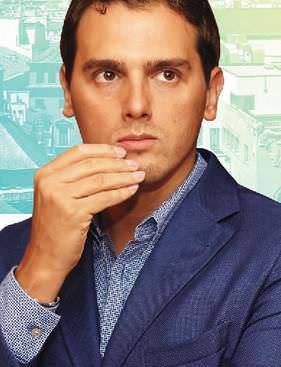 A decade ago, Albert Rivera posed naked to announce the birth of his political party. Now, he's got a shot at being a power broker in the upcoming election.

ALBERT RIVERA IS MAN IN A HURRY

The leader of Ciudadanos, a new centrist party that’s roiling Spanish politics, has been on the go since dawn. He’s just finished speaking to members of the American Chamber of Commerce in Spain at the Westin Palace, an ornate belle epoque–era hotel across from Madrid’s Prado Museum.

On this July morning, Rivera, a 35-year-old lawyer with a made-for-TV smile, plants himself in a stuffed chair for an interview. He orders coffee. It’s too hot to drink quickly. He asks for a Diet Coke. He keeps eyeing the clock to make sure he doesn’t miss a flight back to his native Barcelona.

Rivera finally settles down as he starts describing his campaign. He says it will usher in the most-sweeping changes in Spain since La Transición almost 40 years ago, when the nation became a democracy again following the death of Francisco Franco. For all but a few years since then, Spain has been governed by the Spanish Socialist Workers’ Party (PSOE) or the conservative People’s Party (PP), led now by Prime Minister Mariano Rajoy.

Battered by corruption scandals and the fallout from Europe’s worst real estate crash, the Spanish people are looking for new leaders. In the run-up to a general election that will be held before the end of the year, 31 percent of likely voters say they plan to cast their ballots for Ciudadanos (13 percent) or another challenger, Podemos (18 percent), according to averaged results of three polls conducted in late July and early August.

With these relative newcomers poised to change a two-party system into a coalition-based one, Rivera says Europe’s fifth-largest economy is entering a “second transition.” “We’re going to fi x what’s been broken,” Rivera says in the calm but intense manner that’s become his hallmark on the hustings. “The middle class has suffered; it’s been broken by crisis. My goal is to lead a government that will reform Spain.”