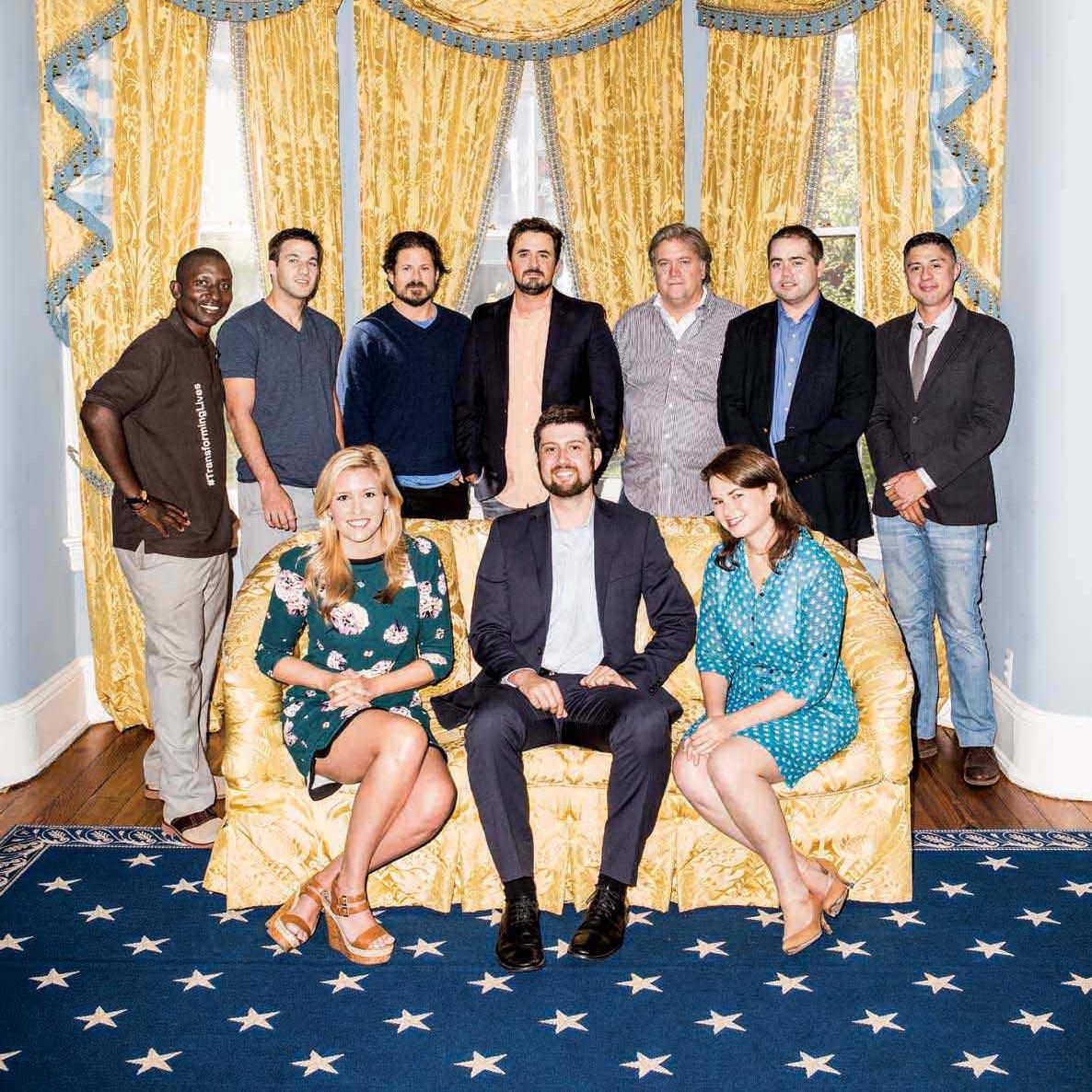 Starring Steve Bannon, the ex-Goldman Sachs banker who is using hedge fun money and Seinfeld royalties to stop the Clintons from retaking the White House. And the Bushes, too.

It’s nearing midnight as Steve Bannon pushes past the bluegrass band in his living room and through a crowd of Republican congressmen, political operatives, and a few stray Duck Dynasty cast members.

He’s trying to make his way back to the SiriusXM Patriot radio show, broadcasting live from a cramped corner of the 14-room townhouse he occupies a stone’s throw from the Supreme Court. It’s late February, the annual Conservative Political Action Conference is in full swing, and Bannon, as usual, is the whirlwind at the center of the action.

Bannon is the executive chairman of Breitbart News, the crusading right-wing populist website that’s a lineal descendant of the Drudge Report (its late founder, Andrew Breitbart, spent years apprenticing with Matt Drudge) and a haven for people who think Fox News is too polite and restrained. He’d spent the day at CPAC among the conservative faithful, zipping back and forth between his SiriusXM booth and an unlikely pair of guests he was squiring around: Nigel Farage, the leader of Britain’s right-wing UKIP party, and Phil Robertson, the bandanna’d, ayatollah-bearded Duck Dynasty patriarch who was accepting a free speech award. CPAC is a beauty contest for Republican presidential hopefuls. But Robertson, a novelty adornment invited after A&E suspended him for denouncing gays, delivered a wild rant about “beatniks” and sexually transmitted diseases that upstaged them all, to Bannon’s evident delight. “If there’s an explosion or a fire somewhere,” says Matthew Boyle, Breitbart’s Washington bureau chief, “Steve’s probably nearby with some matches.” Afterward, everyone piled into party buses and headed for the townhouse.

Bannon, an ex-Goldman Sachs banker, would stand out anywhere, but especially in the drab environs of Washington. He’s a mile-a-minute talker who thrums with energy—his sentences speed off ahead of him and spin out into great pileups of nouns, verbs, and grins. With his sweptback blond hair and partiality to cargo shorts and flip-flops, he looks like Jeff Spicoli after a few decades of hard living. He employs “dude” just as readily.

Ordinarily, Bannon’s townhouse is crypt-quiet and feels like a museum, as it’s faithfully decorated down to its embroidered silk curtains and painted murals in authentic Lincoln-era detail. When I first stopped by in January, about the only sign that I hadn’t teleported back to the 1860s was a picture on the mantle of a smiling woman on a throne with a machine gun in her lap (Bannon’s daughter Maureen, a West Point grad and a lieutenant in the 101st Airborne Division; the throne belonged to Saddam Hussein—or once did). Until Bannon showed up, the only sounds I heard were faint noises from the basement, which might have been the young women he calls the Valkyries, after the war goddesses of Norse mythology who decided soldiers’ fates in battle. More on them later.

On this February night, however, the party is roaring. Along with his CPAC triumph, a secret project he’d conceived is nearing fruition: His lawyers are almost finished vetting a book about Bill and Hillary Clinton’s murky financial dealings that he’s certain will upend the presidential race. “Dude, it’s going to be epic,” he tells me. I sip my “moonshine”—his wink at the Dynasty guests— and wonder, as people often do, whether Bannon is nuts. On my way out, the doorman hands me a gift: a silver hip flask with “Breitbart” printed above an image of a honey badger,the insouciant African predator of YouTube fame whose catchphrase, “Honey badger don’t give a s---,” is the Breitbart motto.

Bannon’s life is a succession of Gatsbyish reinventions that made him rich and landed him squarely in the middle of the 2016 presidential race. He’s been a naval officer, investment banker, minor Hollywood player, and political impresario. When former Disney chief Michael Ovitz’s empire was falling to pieces, Bannon sat Ovitz down in his living room and delivered the news that he was finished. When Sarah Palin was at the height of her fame, he whispered in her ear. When Donald Trump decided to blow up the Republican presidential field, Bannon encouraged his circus-like visit to the U.S.-Mexico border. John Boehner just quit as House speaker because of the mutinous frenzy Bannon and his confederates whipped up among conservatives. Today, backed by mysterious investors and a stream of Seinfeld royalties, he sits at the nexus of what Hillary Clinton once dubbed “the vast right-wing conspiracy,” where he and his network have done more than anyone to complicate her presidential ambitions—and they plan to do more. But this “conspiracy,” at least under Bannon, has mutated into something different from what Clinton described: It’s as eager to go after establishment Republicans, such as Boehner or Jeb Bush, as Democrats like Clinton.

“I come from a blue-collar, Irish Catholic, pro-Kennedy, pro-union family of Democrats,” says Bannon, by way of explaining his politics. “I wasn’t political until I got into the service and saw how badly Jimmy Carter f---ed things up. I became a huge Reagan admirer. Still am. But what turned me against the whole establishment was coming back from running companies in Asia in 2008 and seeing that Bush had f---ed up as badly as Carter. The whole country was a disaster.”

As befits someone with his peripatetic background, Bannon is a kind of Jekyll-and-Hyde figure in the complicated ecosystem of the Right—he’s two things at once. And he’s devised a method to influence politics that marries the old-style attack journalism of Breitbart.com, which helped eject Boehner, with a more sophisticated approach, conducted through the nonprofit Government Accountability Institute, that builds rigorous, fact-based indictments against major politicians, then partners with mainstream media outlets conservatives typically despise to disseminate those findings to the broadest audience. The biggest product of this system is the project Bannon was so excited about at CPAC: the best-selling investigative book, by GAI’s president, Peter Schweizer, Clinton Cash: The Untold Story of How and Why Foreign Governments and Businesses Helped Make Bill and Hillary Rich. Published in May by HarperCollins, the book dominated the political landscape for weeks and probably did more to shape public perception of Hillary than any barb from her Republican detractors.

Jeb is about to come in for the same treatment. On Oct. 19, GAI will publish Schweizer’s e-book, Bush Bucks: How Public Service and Corporations Helped Make Jeb Rich, that looks at how Bush enriched himself after leaving the Florida governor’s mansion in 2007. A copy obtained by Bloomberg Businessweek examines Bush’s Florida land deals, corporate board sinecures, and seven-figure salary with Lehman Brothers, whose 2008 bankruptcy touched off the financial crisis. “It’s not as cinematic as the Clintons, with their warlords and Russian gangsters and that whole cast of bad guys,” says Bannon. “Bush is more prosaic. It’s really just grimy, low-energy crony capitalism.”

While attacking the favored candidates in both parties at once may seem odd, Bannon says he’s motivated by the same populist disgust with Washington that’s animating candidates from Trump to Bernie Sanders. Like both, he’s having a bigger influence than anyone expected. But in the Year of the Outsider, it’s somehow fitting that a figure like Bannon, whom nobody saw coming, would roil the national political debate.

Most days, Bannon can be found in his Hyde persona, in the Washington offices of Breitbart News. Operating from the basement of his townhouse—known to all as the Breitbart Embassy—Breitbart’s pirate crew became tribunes of the rising Tea Party movement after Barack Obama’s election, bedeviling GOP leaders and helping to foment the 2013 government shutdown. The site has also made life hell for Democrats by, for example, orchestrating the genital tweeting misfortune that cost New York Representative Anthony Weiner his seat in Congress in 2011. Tipped to Weiner’s proclivity for sexting with female admirers, Bannon says, the site paid trackers to follow his Twitter account 24 hours a day and eventually intercepted a crotch shot Weiner inadvertently made public. The ensuing scandal culminated in the surreal scene, carried live on television, of Andrew Breitbart hijacking Weiner’s news conference and fielding questions from astonished reporters.

On occasion, this partisan zeal has led to egregious errors. Before our lunch in January, a Breitbart reporter published an article assailing Obama’s nominee for attorney general, Loretta Lynch—but went after the wrong Loretta Lynch. She wasn’t, as the site reported, the one who’d been on Bill Clinton’s defense team. The embarrassed reporter asked for time off. Bannon, allergic to any hint of concession, refused: “I told him, ‘No. In fact, you’re going to write a story every day this week.’ ” He shrugs. “We’re honey badgers,” he says. “We don’t give a s---.” 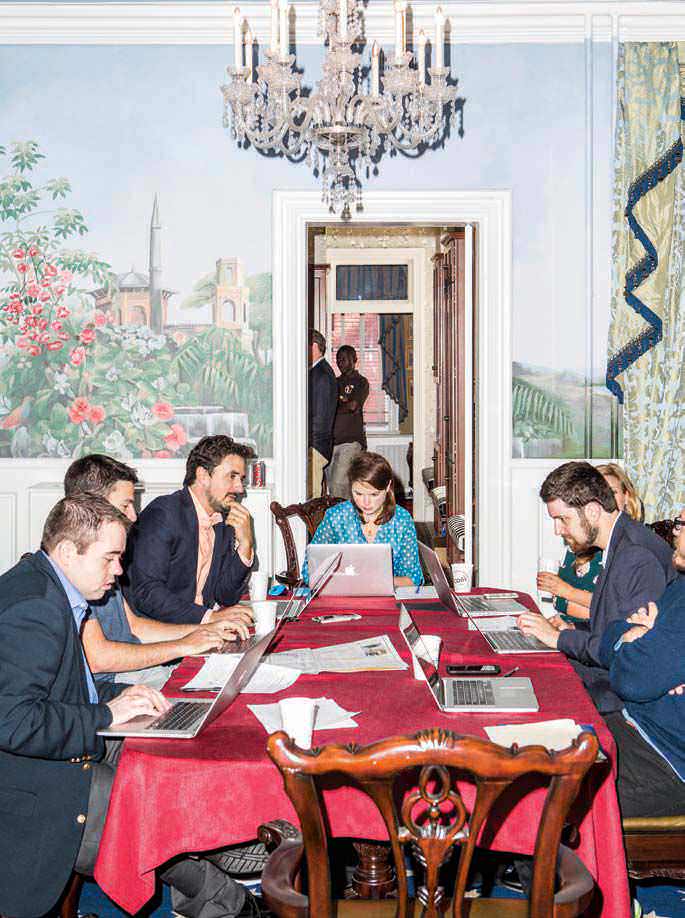