Inside The Trump Organization 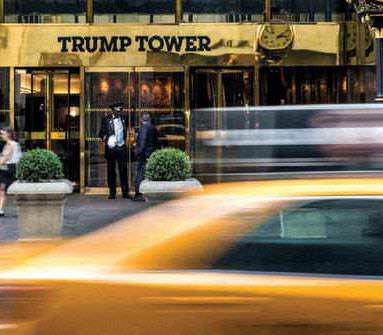 So what does Trump do, exactly?

Past Trump Tower’s bow-tied doorman, through a shiny revolving door, toward the 60-foot waterfall, up a dim elevator, after glass doors and smiling assistants, Donald J. Trump, chairman of the Trump Organization, sits with pictures of himself to his left, to his right, in front of, and behind him. A gun he got at an awards dinner this year in Charleston, S.C., is mounted above his desk. Trump is three days away from his first debate with the nine other Republican presidential candidates who made the cut , the ones he’s pulverizing in polls.

He’s taking a break from a campaign that, though he has no experience in government, has him zooming toward the White House. We're talking business rather than politics — after all, that’s his central qualification for the job he’s seeking.  When Trump is asked to name a leader he looks to for advice on managing his company, his mouth, just as acrobatic as his more famous hair, pulls tight, snaps open, and lets out its most important syllable.

Does he admire any other business leaders?

Trump isn’t exactly self-made - he inherited substantial wealth from his father - but he is definitely self-invented. There’s no model in the political world for how he transformed himself into a campaign megastar without preparation, politeness, policy, or public service. To wander around inside Trump’s kingdom with his deputies, children, lenders, and former executives is to find a New York real estate mogul who stopped building Manhattan real estate and a global hotelier who doesn’t own most of his foreign hotels. Long before he was ignoring basic political rules, he was sailing far beyond the limits of his industry, steering an empire that’s as similar to most corporations as his run is to most presidential campaigns. In the same way that his campaign is post- politics, his company is post-business.

Trump is selling himself to America as the king of builders, a flawless deal maker, and masterful manager. But he isn’t really any of those things. Trump has built few skyscrapers this century, stumbling twice when he’s tried, and struggled with an array of other projects. Meanwhile, his corporate leadership is a kind of teenager’s fantasy of adult office power. From his Trump Tower desk in Midtown Manhattan he controls the teensiest details, rejects hierarchy, and picks top deputies by following his own recipe for promotion.

None of those things means he’s a sham. The story of how he came to be what he is now—above all else a landlord and a golf bigwig—is even weirder than his charge to the White House. Trump rose in the glitzy 1980s on borrowed money, survived early 1990s disasters that nearly brought him down, then transformed himself and his business. His organization is still successful, just not in the way he’s claimed.

“We evolve very much in this company,” Trump says. “See that? I’m just looking while I’m talking to you. See that record?” There’s a plaque across from his desk. “That’s a platinum, that was sent. Mac Miller, did you ever hear of Mac Miller? He’s a rapper. He did a song called Donald Trump—100 million hits!” He takes a breath and goes back to his company. “I tell you what,” he says a few minutes later. “Someday before I kick the bucket, somebody is going to get what a great business I built. People don’t know.”

Four days later, the morning after the debate, Matthew Calamari’s eyes are misting. Trump’s chief operating officer has the mustache and bulk of a late-1970s line backer because he was one in college. That was before he tackled hecklers at a 1981 US Open women’s semifinal, won the attention of a young real estate star who happened to be there, got hired as his bodyguard, and rose to become one of his top executives.

“I love the guy,” Calamari says. “My thing is, I’ve always promised I would, knock on wood, never let anything happen to him.” His voice wobbles. Lately, if you catch the right Trump speech and look carefully, you see Calamari. He likes to watch over his boss on the trail. “I just enjoy it. It’s not the money. I enjoy working for the man.”

A commemorative Secret Service knife keeps him company in his office, along with a poster of Tony Soprano, snapshots of his Shih Tzus, and a photo his brother took of the moment his knee was wrecked in a game. “You know what?” Calamari says. “If I would have made it in football, I would not be working for Donald Trump.”

Calamari gets up from his chair to show how he escorted his boss in the early days, just behind and slightly to the side. “Being able to walk with him to these other job sites, I saw his eye for detail,” he says. Calamari tried to emulate Trump when he hired other security guards. Besides security, Calamari’s responsibilities now include building management, construction, and insurance. “He promotes you until you fail,” he says. “There are no boundaries.”

Calamari won his job when the hecklers interrupted Martina Navratilova and Chris Evert. “I took one guy immediately right down,” he says. Then someone else started getting rude. “I ran right at him, I picked him up, I slammed him to the ground, I carried him down,” he says. He remembers Trump’s wife at the time, Ivana, asking for his name on her husband’s behalf. Navratilova won.

Calamari isn’t the only bodyguard Trump has promoted. The man who manages his Las Vegas hotel “used to drive us to school every day,” middle son Eric Trump says. “If you go down to Wall Street, that’s not happening.” Eric, like his sister Ivanka and their brother Donald Jr., is a senior executive at the company. Allen Weisselberg, who grew up in Brownsville, worked as an accountant for Trump’s dad before joining the son, and hasn’t shaken his terrific Brooklyn honk, is now his chief financial officer. Amanda Miller, who was a teenage waitress when Trump spotted her at his Westchester club, is his head of golf marketing.

“I like taking people that I know,” Trump says. “They don’t have drug problems, they don’t have alcohol problems. They’re family. I would rather take guys at a lower level and move them up than hire people that you have no idea who they are.”rump’s empire is almost moving if you spend time with the deputies who admire him, alarming if you focus on its messier deals, and astounding if you remember how close it came to ruin. If you’re Donald Trump, it’s totally underrated.

It’s not a gargantuan company. The $605 million revenue that Weisselberg says it took in last year (though the months shift depending on the business line) makes it, for purposes of comparison, roughly the size of a company called NN, based in Johnson City, Tenn., which produces tiny steel balls.

The $605 million is almost double the revenue he reported in his financial disclosure for candidates, which Weisselberg says was bogged down by federal rules on what they could include. The profit on that revenue was somewhere between $275 million and $325 million, the CFO says.

That margin is extraordinary. Weisselberg points out that Trump’s licensing businesses, even if they’re smaller than his real estate and golf portfolios, are essentially all profit and help make the margin so wide. Trump squeezed about 13 times more profit than the Tennessee company got from the same revenue.

Trump is about to describe the most profitable parts of his business when Michael Cohen walks into the office.

“What do you have, Mike?” Trump says. Cohen, an executive vice president and special counsel to Trump, became famous a week earlier. He said he would do something “disgusting” to a Daily Beast reporter if the website published Ivana Trump’s accusation in a deposition that Trump had violated her in 1989, when they were married. Cohen added that a wife can’t be raped by her husband, legally speaking, which isn’t true. (Ivana has said the story was “without merit.”)

Cohen is upbeat, naming a television anchor who just called.

“His comments to me just now on the phone—” Cohen says.

“He can’t believe it, right?” Trump interrupts. “Because he saw the new polls?”

“He actually thinks you really could be the nominee. He said, ‘If you asked me the same question six weeks’—I’m sorry to interrupt—‘if you would have said this to me six, seven weeks ago,’ ” Cohen says. “He goes, ‘If Donald wants to come on, love to have him.’ They’re running 24/7 on just the debate.”