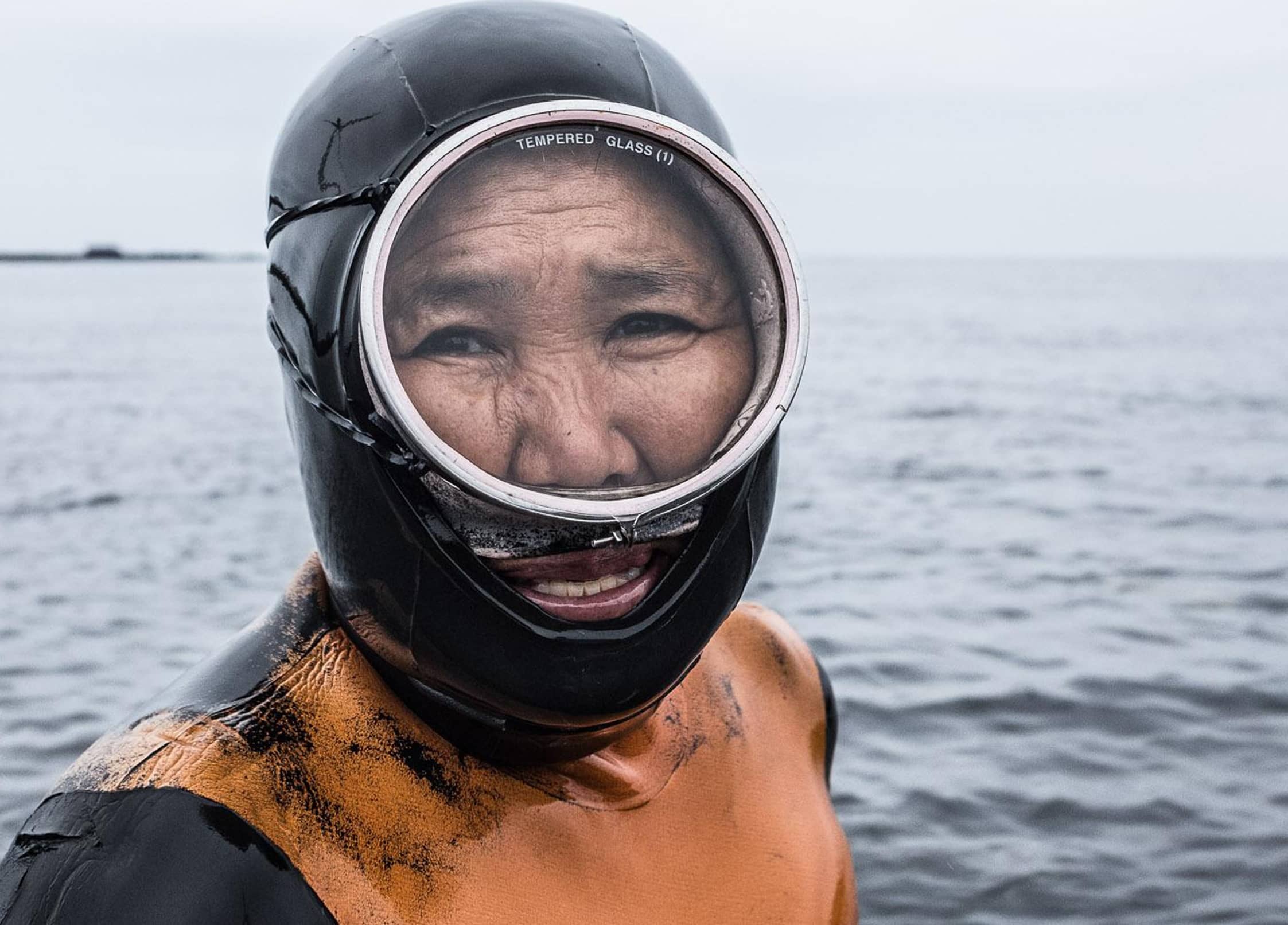 The Korean tradition of deep-sea diving for fresh seafood dates back to the 5th century. Initially, males dominated this profession. However, by the 18th century, women divers, also known as Haenyeo or “sea women,” gradually became associated with this tradition. In November 2016, the Haenyeo from Jeju Island, South Korea were inscribed on UNESCO’s Intangible Cultural Heritage list.

The Origins of The Haenyeo women Divers – The Haenyeo is best known as the female divers from Jeju Island. without proper equipment, they dive into waters twenty meters deep to catch fresh seafood from the depths of the ocean. Equipped with only a lead-weighted vest and goggles, these women make dozens of dives a day while holding their breath for slightly more than two minutes at a time and descent up to 20 meters. Diving as a Haenyeo is no mean feat – for the work is often backbreaking and dangerous. Due to the grueling nature of the work, the Sea women portray a rich tradition that is slowly being eroded. Industrialization also played a part in this dying tradition. Through mastering craft for many years, a large percentage of the Haenyeo replaced their husbands to the breadwinner of the household. 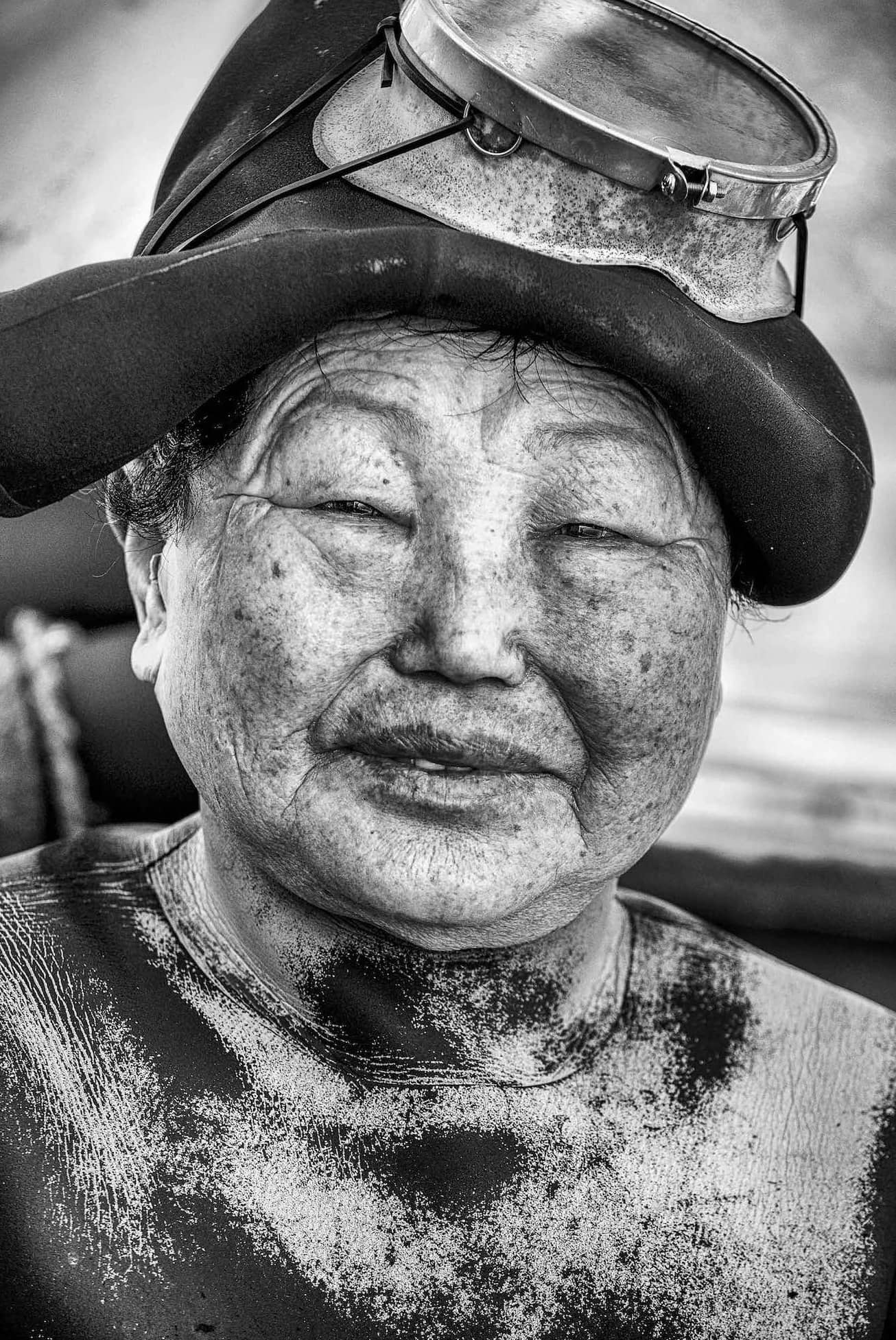 Most of the Haenyeo are between 60 to 80 years old, and they started the activity at a very young age as early as 11 years old. They make their living by selling their catch to restaurants, tourists, or collectivity to export.

One day, I was looking on the internet for a place where I could participate at a race and also do some photography at the same time. Jeju ultra Trail running race caught my attention. 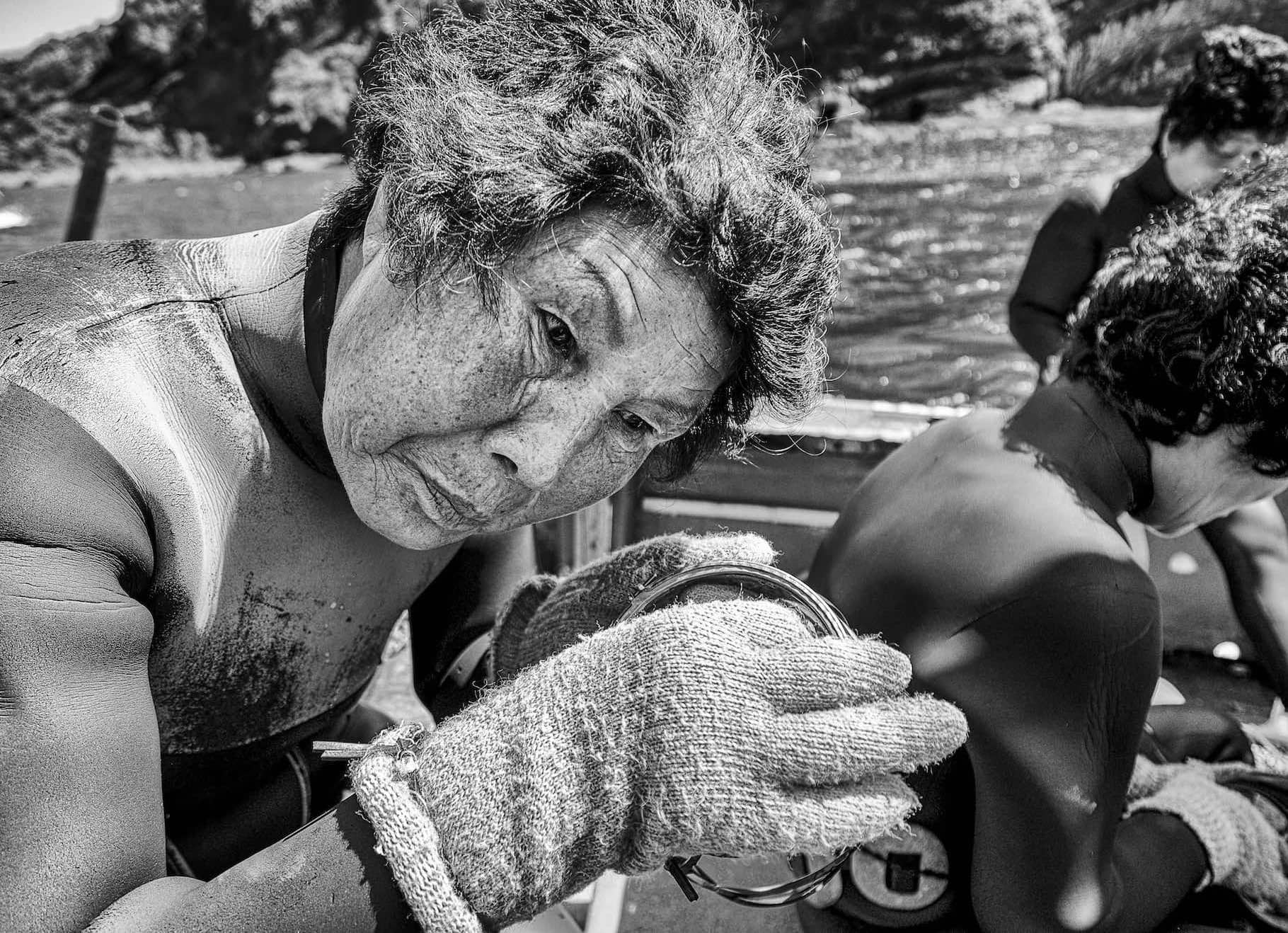 From there, I was looking on google images to get a better idea of the landscape of the island, and I saw a picture of an old lady with an old wetsuit. I clicked on it and discovered the name of the ladies - Haenyeo. I did more research, and I fell in love with the subject and decided to embark on my first photography documentary.

I had no idea how I will make it, but I was confident that I would. Before I went to Jeju Island, I contacted a few Korean photographers who did some photography series about the Haenyeo via social media and websites, but they all tried to discourage me not to come and document this subject.

However, that did not stop me, and I told myself that if it is challenging and not easy to produce, it will be even more exciting and captivating. I believed that it's going to be rewarding at the end. 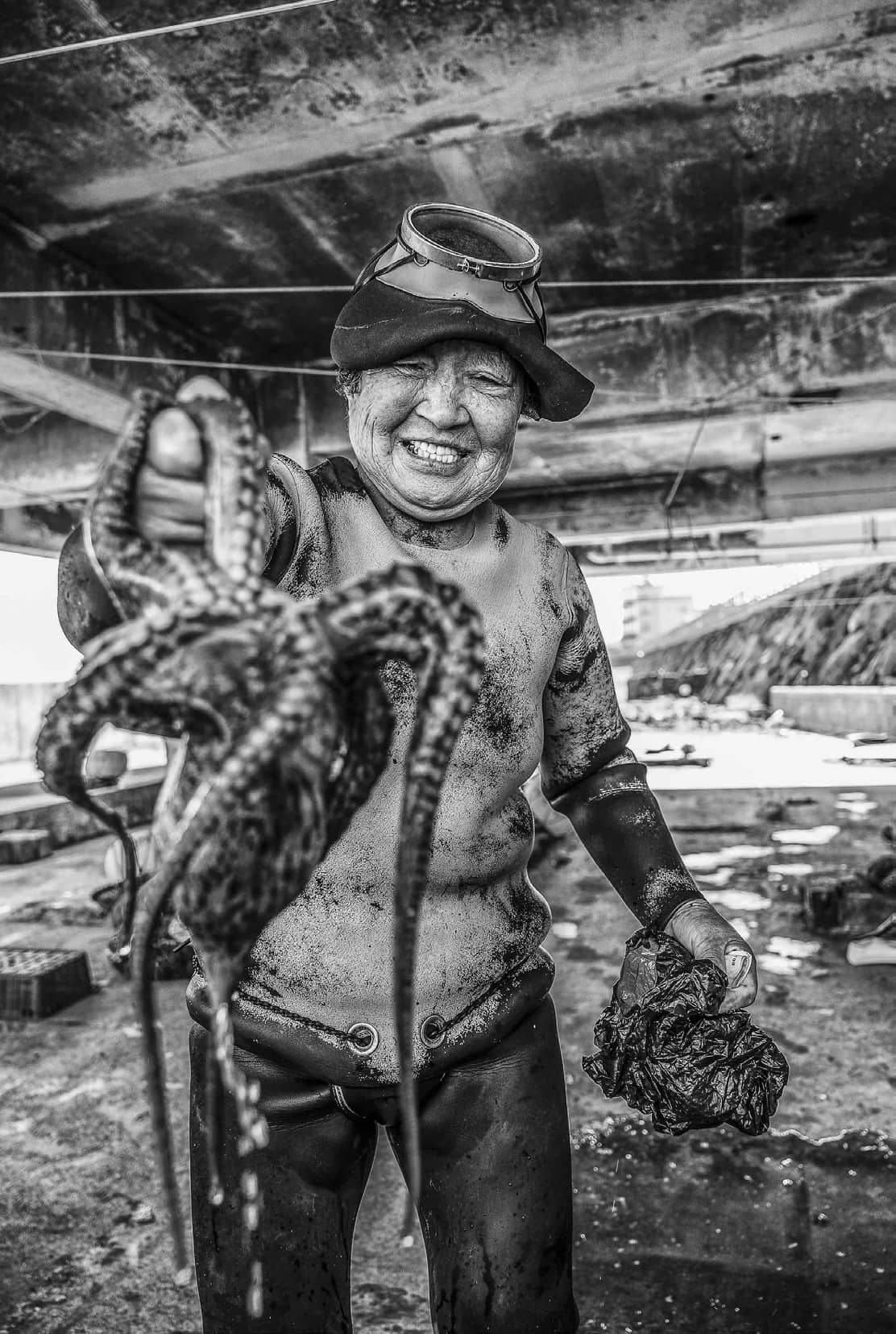 In May 2016, I went ahead, and upon arrival at the airport, I took a map and circled out with my pen around the villages with names that I know it was possible to find. Later on, I rented a scooter, and the adventure began with all my gears and stuff. I decided to embrace this challenging adventure as I rode my motorcycle and looked towards the sea, trying to point out any orange color (the wetsuits and the accessories are in orange).

Even without speaking Korean and not having all the information - with determination, conviction, and patience, I managed to spend time with the Mermaids of Jeju (nickname for Haenyeo), and I managed to gain a perfect understanding of the situation and their work. 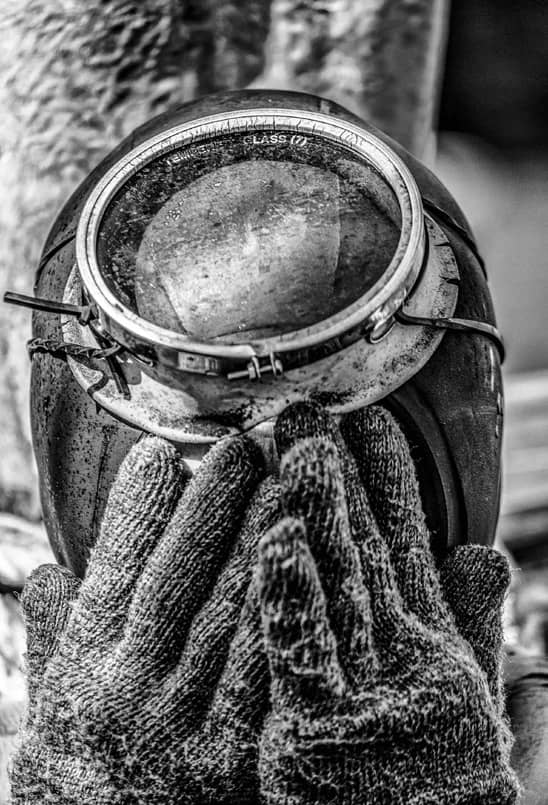 I have a lot of stories to share because these ladies are not easy, and they have a compelling character.

One of the most memorable experiences was when I followed a group of Haenyeo out to sea without any diving gear and just a wetsuit. They were laughing at me because they thought that I could not follow them. After all, they were impressed that I could keep up as they swam 2km out to sea and managed to stay underwater for about a minute. To me, it was not a challenge as I swim 4km to 6km in the pool as training regularly. After that day, I gained their confidence and trust; they let me get closer to them. 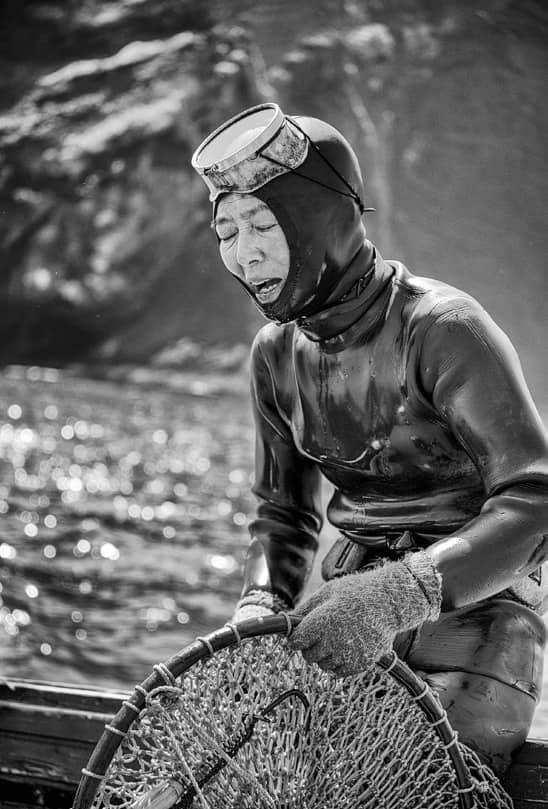 During my second trip, I focused more on underwater shots. I really enjoyed the beauty of these incredible ladies, swimming, diving, and catching seafood. They did this for a living, and it was natural for them. 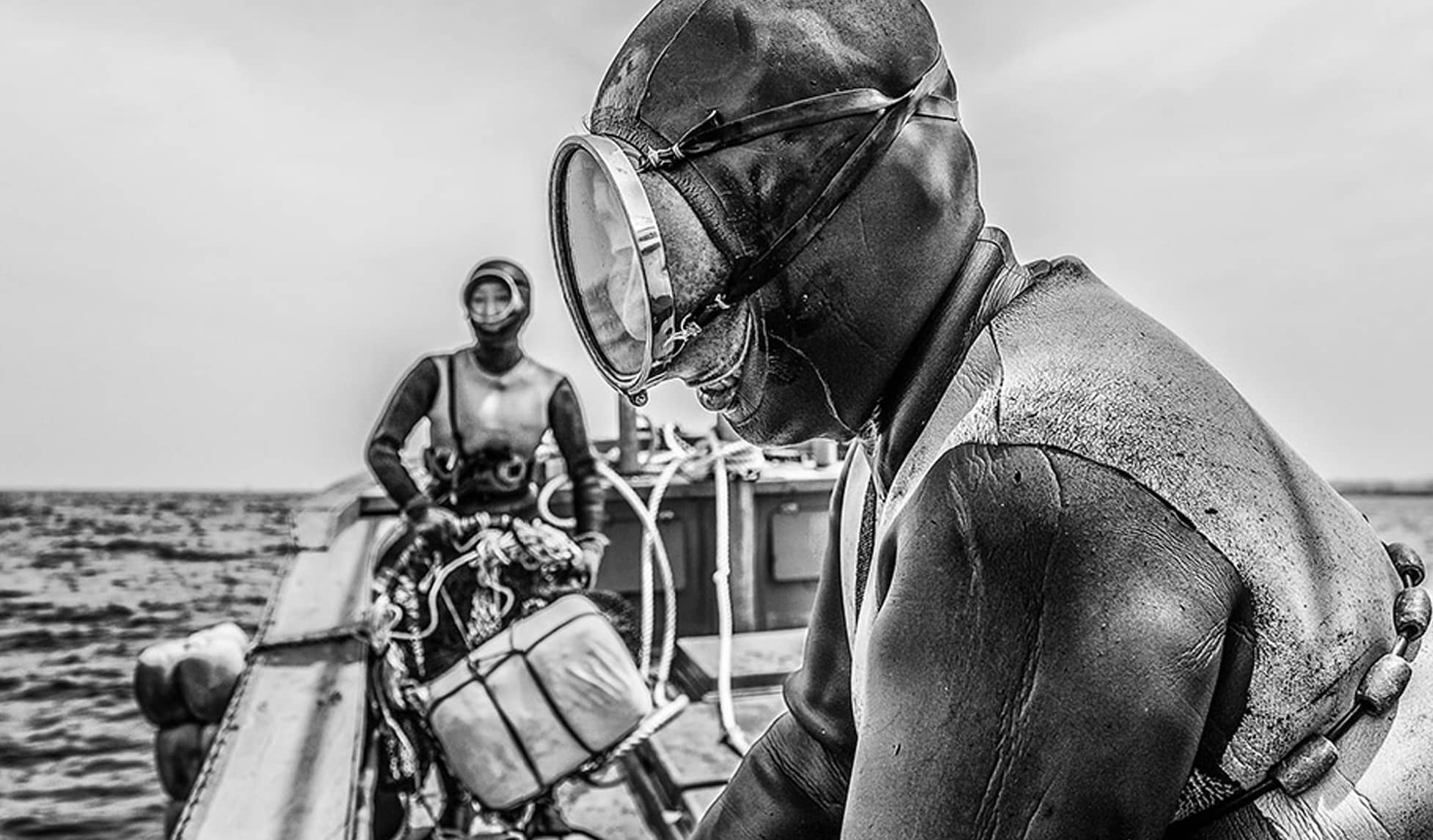 I loved to watch them work. They are real athletes. Every day was a fantastic performance in the water. Despite the changing weather conditions, and different water currents every day, the Haenyeo never gave up and faced the sea and dived like mermaids without fail. what I find interesting in some of the pictures is that you can feel a similar texture of the wetsuit, the skin, and the gears. The similarities and resemblance reflect their strong resilience. you can see it weathered down by the long exposures to harsh conditions at sea and under the sun, but still doing strong and well. 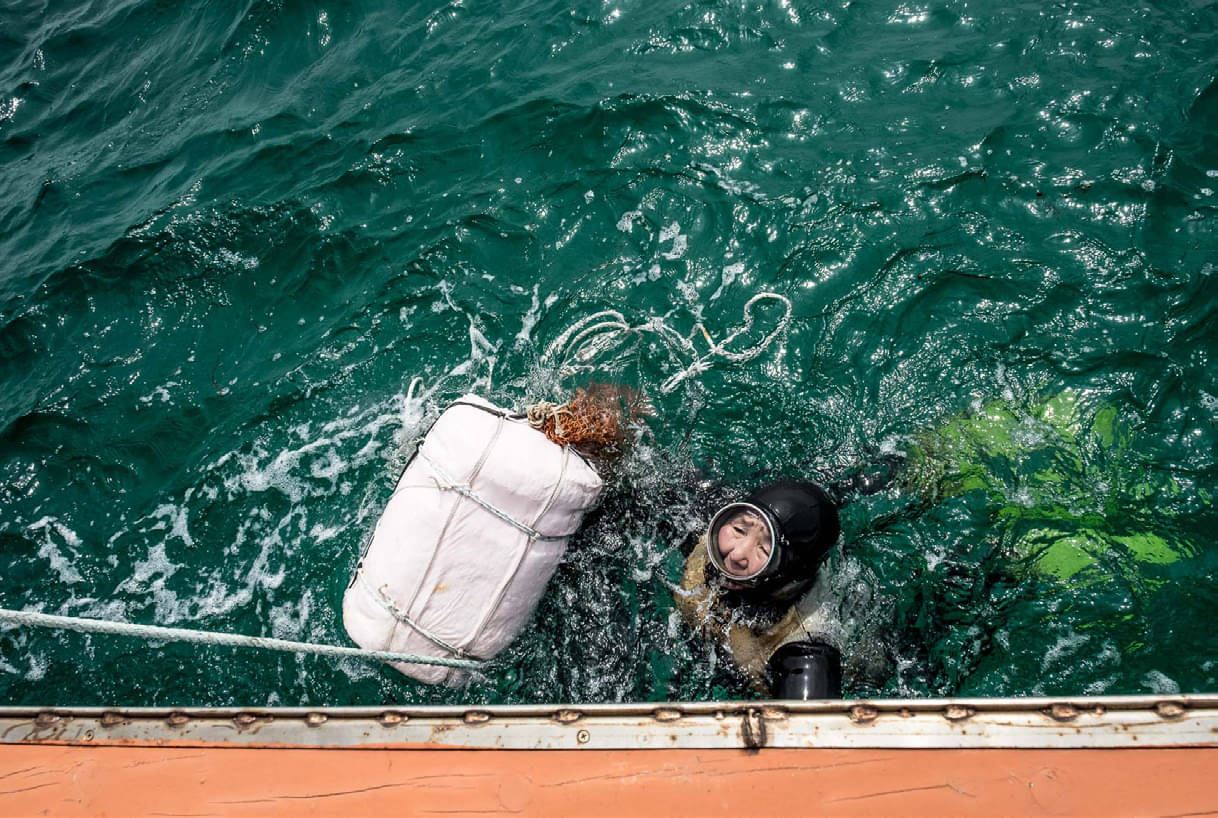 The most compelling imagery from the photography series is that of the close-up shots of their faces framed by goggles, wrinkled from being battered by the stormy waves and having various weathered hardships across the years. 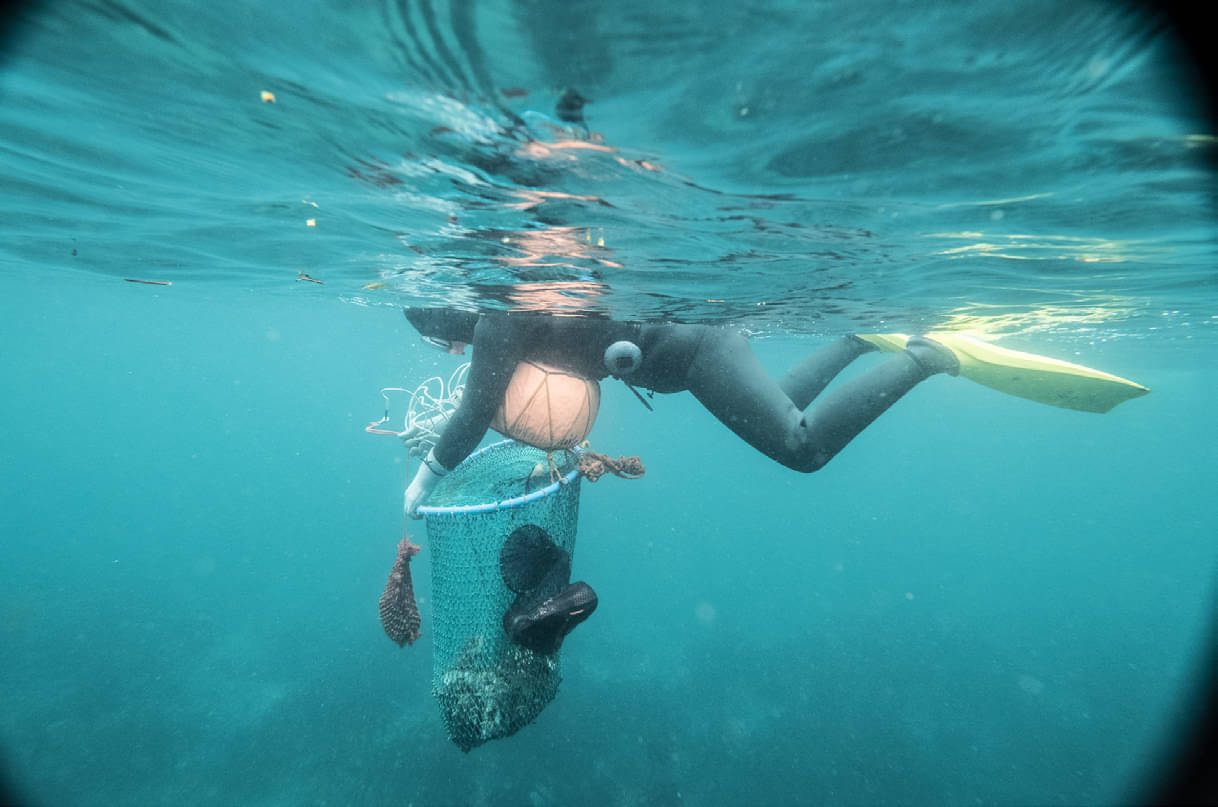 Many times after the Haenyeo returned from diving with their nets heavy and filled with seafood; I would put aside my camera to help them lug their catch from the water back to shore. As the days passed, the Haenyeo were more welcoming, and our relationship grew stronger. At some point, these ladies gave me seafood and took care of me. 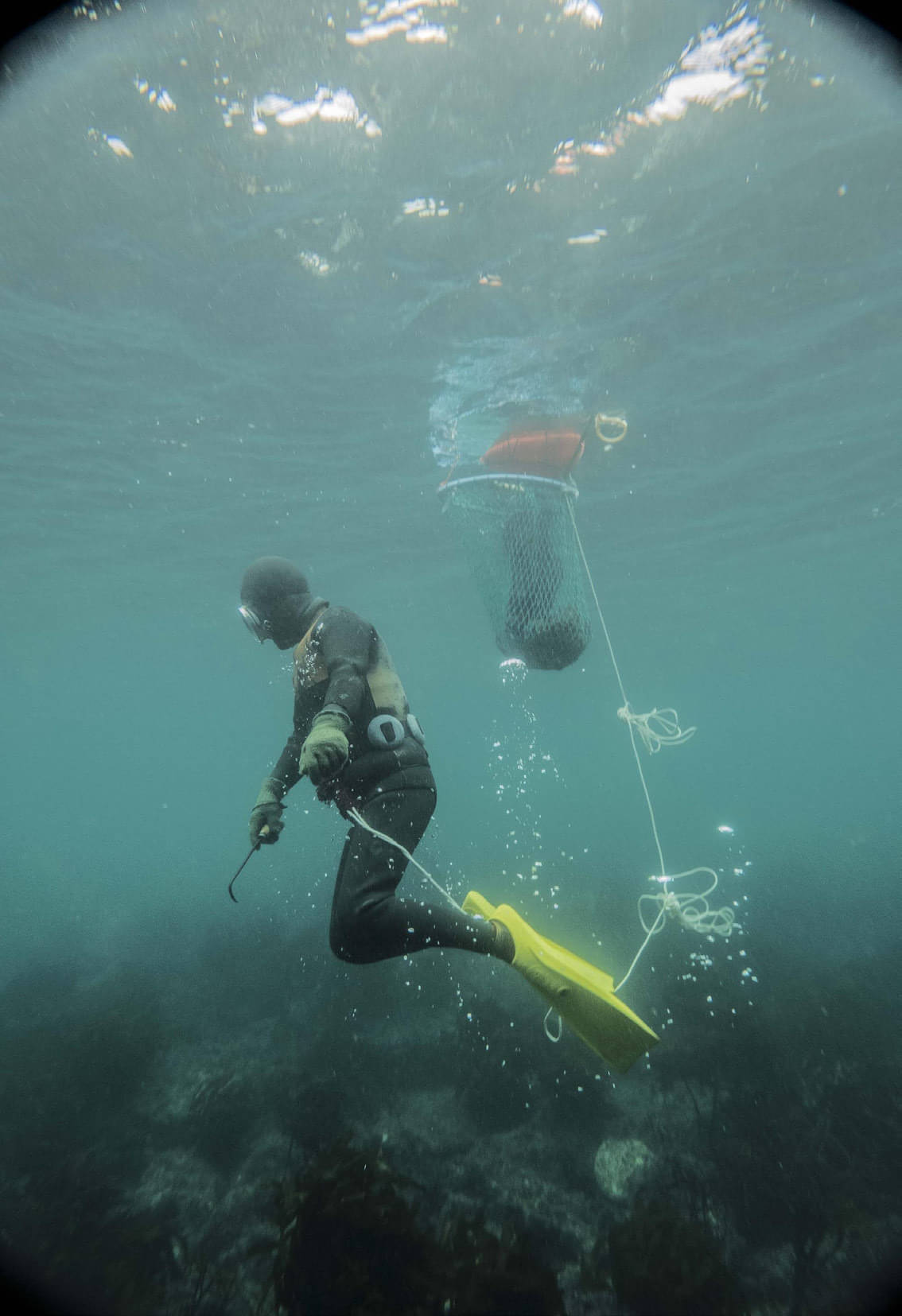 During my three trips, I shot pictures from land, from a boat, while submerged in water, underwater, and from the sky by using a drone. I felt that I have a complete work and overview of the Haenyeo activity. 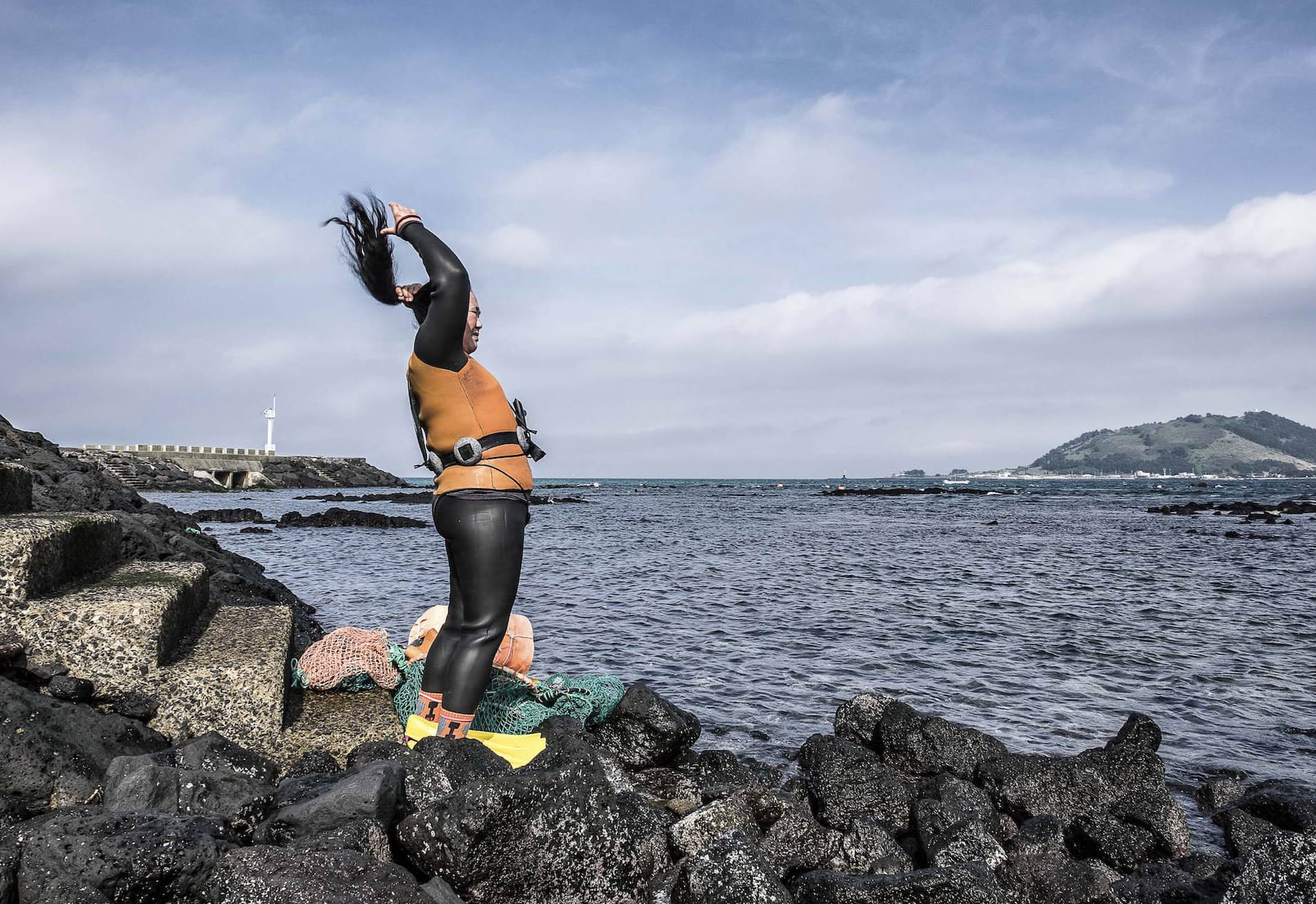 The pictures show the women at various stages of work. At different villages across the island, they meet and prepare for their day by downing energy drinks and slathering on sunscreen. Just before taking the plunge, they put on their masks. They are also shown post-dive, cleaning shellfish and drying seaweed. Each diving session could take a few hours. 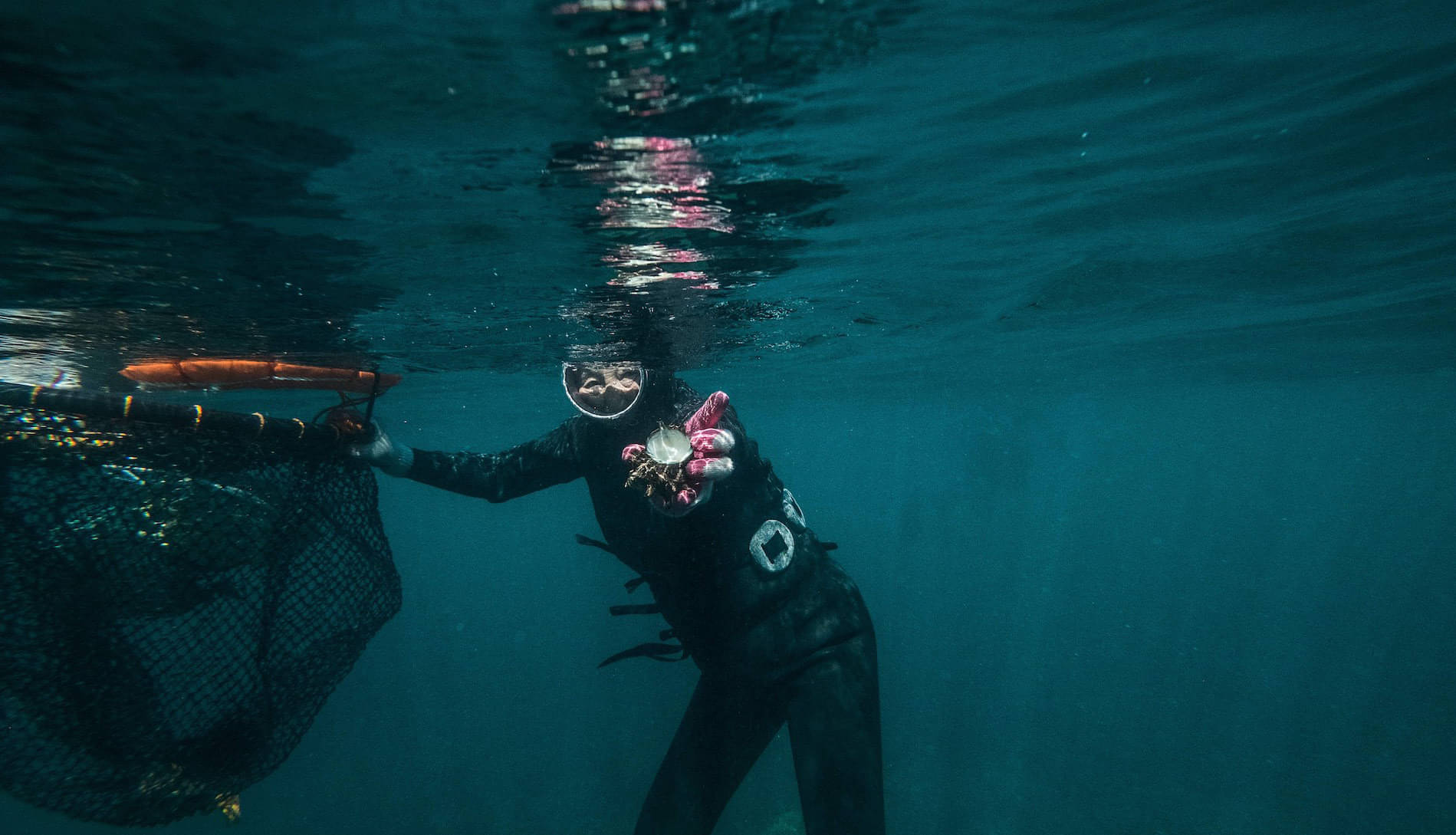 Some of the women have difficulty walking on the land, but in the water, they are like fish.