Dalit rape: Why the road to justice is so rocky 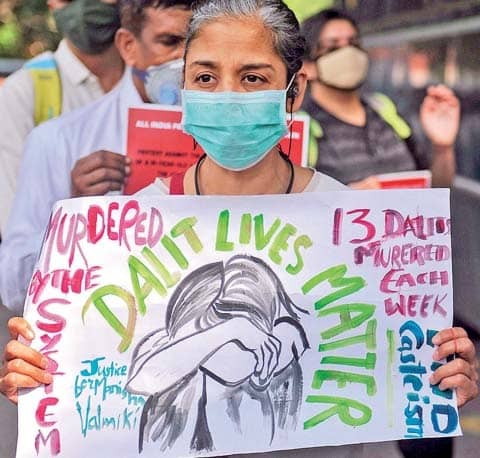 In January, a 14-year-old girl in Kurukshetra, Haryana discovered she was five months pregnant. She had been raped for the last one year by a group of dominant caste men. While the POCSO Act which deals with sexual offences against children guarantees her rehabilitation provisions, she was not given any counselling or a safe place to stay. “She couldn’t have stayed in the village because she was pregnant and it was unsafe,” says Manisha Mashaal from Swabhiman Society, an organisation of Dalit women that helps rape victims and survivors in North India, mostly Haryana. “They kept her for three months in the hospital against her will in a room that was the size of a toilet and she was given no personal security.” The case is still ongoing in court. Mashaal, who has been doing this work for 15 years, says she’s worked on almost 300 cases. Of those, justice was served in maybe 10. Yet, each of those 10 families had to move away from their village as it was no longer safe.

As the family of the 20-year-old Dalit woman in Hathras who was allegedly gang-raped, brutalised and killed were told in a video doing the rounds, “The media will leave. Only we will be here with you.” This threat is just one of the reasons why activists like Riya Singh, part of the core leadership of collective Dalit Women Fight, say NCRB figures about assaults on Scheduled Caste women and minors — 3,366 in 2019 — are just the tip of the iceberg. Survivors and families of victims face roadblocks in every step of the process to get justice.

“In 99% cases, the police hand over an acknowledgement of a non-cognisable offence instead of an FIR under the Scheduled Caste and Scheduled Tribe (Prevention of Atrocities) Act. External pressure is needed in each case at the level of filing an FIR, then again more pressure to get the FIR done under the accurate sections of the PoA act and not the just IPC,” says Singh, whose collective provides legal aid and counselling for survivors.

MORE STORIES FROM THE TIMES OF INDIA MUMBAIView All