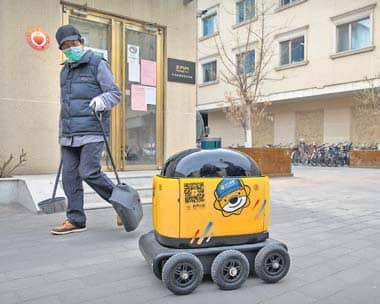 While other industries struggle, Liu Zhiyong says China’s virus outbreak is boosting demand for his knee-high, bright yellow robots to deliver groceries and patrol malls looking for shoppers who fail to wear masks.

Liu, CEO of ZhenRobotics Corp, is among millions of entrepreneurs who are gradually getting back to work after China declared victory over the novel coronavirus that shut down the world’s second-largest economy.

ZhenRobotics’ flagship model is the six-wheeled, 68-centimeter-tall RoboPony. The self-driving cart is sold to retailers, hospitals, malls and apartment complexes. Unlike airlines, hotels and other industries that face a long and uncertain struggle to recover, Liu said his orders have tripled since the outbreak began.

“The epidemic made people aware of the fragility of human beings,” Liu said.