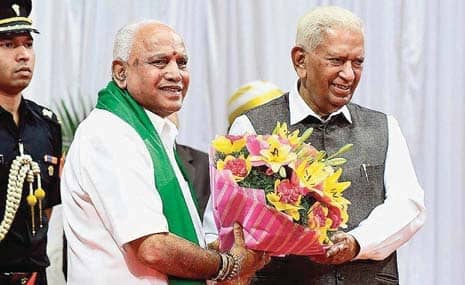 On first day in office, he announced sops for farmers and weavers.

B.S. Yediyurappa took oath as the 31st Chief Minister of Karnataka on Friday, three days after the collapse of the Congress-JD(S) government. He is set to take the floor test on Monday to prove his majority. This is the 76-yearold’s fourth stint at the helm of the State.

Mr. Yediyurappa’s first announcements were sops for farmers and weavers. He said an additional sum of 4,000 in two instalments would be given to farmers from the State government under the Pradhan Mantri Kisan Samman Nidhi, which will take the total benefit to 10,000, including 6,000 from the Centre.