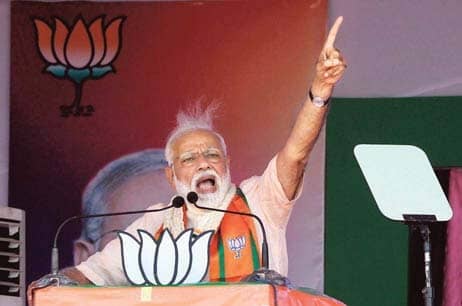 In his first campaign rally in Maharashtra for the 2019 general election, Prime Minister Narendra Modi on Monday criticised the Congress for coining the term ‘Hindu terror’. He added that the community would teach the Congress a fitting lesson for the slur.

“The Congress and the NCP can stoop to the lowest level for the sake of votebank politics. The Congress attempted to defame crores of Indians by using the term ‘Hindu terror’,” he said at a rally in Wardha in the Vidarbha region. The BJP’s Ramdas Tadas is seeking reelection from the constituency, taking on Charulata Tokas of the Congress.

Alluding to the Samjhauta Express blast case verdict, which acquitted Swami Aseemanand, without however specifically referring to the case, Mr. Modi said it had exposed the conspiracy hatched by the Congress.