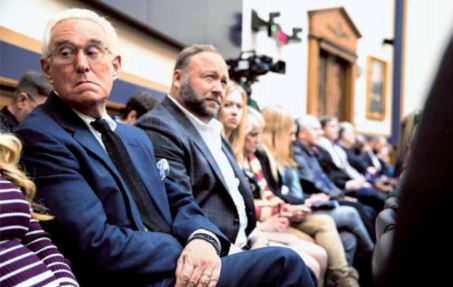 Roger J. Stone Jr., a longtime informal adviser to President Donald Trump, was charged as part of the special counsel investigation over his communications with WikiLeaks, the organisation behind the release of thousands of stolen Democratic emails during the 2016 campaign, in an indictment unsealed on Friday.

Mr. Stone was charged with seven counts, including obstruction of an official proceeding, making false statements and witness tampering, according to the special counsel’s office.

FBI agents arrested Mr. Stone before dawn on Friday at his home in Fort Lauderdale, Florida, and he was expected to appear in a federal courthouse there later on Friday. FBI agents were also seen carting hard drives and other evidence from Mr. Stone’s apartment in New York City.

The indictment is the first in months by the special counsel, Robert Mueller, who is investigating Russia’s alleged interference in the 2016 election and possible coordination with Mr. Trump campaign associates. Citing details in emails and other forms of communications, the indictment suggests that Mr. Trump’s campaign knew about additional stolen emails before they were released and asked Stone to find out about them.

Mr. Stone denied lying to the House Intelligence Committee and said he will plead innocent to the charges filed against him by Mr. Mueller.