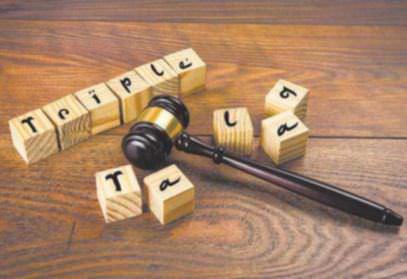 The new law has safeguards, including bail to the accused before the start of trial

The Union Cabinet on Wed­nesday cleared an ordinance that makes talaq-e-biddat, or instant triple talaq, a cri­minal offense that will at­ tract a maximum jail term of three years. President Ram Nath Kovind later in the day gave his assent.

The new law, however, in­corporates safeguards, in­cluding a provision for bail to an accused before the start of the trial.

While instant triple talaq will continue to be a “non­ bailable” offence — the police cannot grant bail at the police station — the accused can approach a magistrate for bail even before trial.

“There was an overpower­ing urgency and a compell­ing necessity to bring the or­dinance as the practice continued unabated despite the Supreme Court ’s order last year,” Union Law Minis­ter Ravi Shankar Prasad told reporters.