T.N. Fails To Find A Place In Ministry 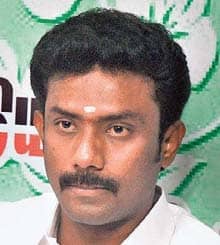 With no nominee of the party making it to the Union Council of Ministers, members of the ruling AIADMK are a disappointed lot.

In fact, it will be the first time in over 60 years that the State will have no representation in the Union Council of Ministers.

However, BJP spokesperson T. Narayanan contests this. “Nirmala Sitharaman and S. Jaishankar, both sworn in on Thursday, are from our State,” he said, expressing confidence that the AIADMK would “definitely” be accommodated at the Centre in the next round of expansion.

In the last one week, speculation was rife that P. Raveendranath Kumar, the newly elected Member of Parliament from the Theni Lok Sabha constituency, and R. Vaithilingam, former State Housing Minister and now a Rajya Sabha member, might be inducted into the Union Ministry.