Sabarimala board to seek time to implement SC order 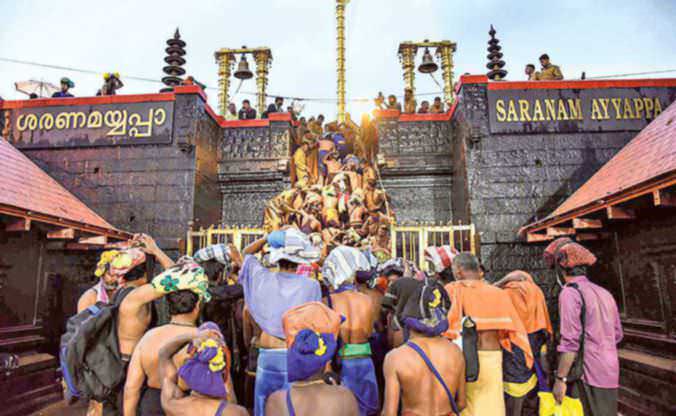 The Sabarimala temple opened on Friday for the annual 62day pilgrimage season amid unprecedented security arrangements, even as the Travancore Devaswom Board (TDB) decided to move the Supreme Court seeking more time to implement its order allowing entry to women of all ages.

The decision by the TDB, which manages the hill shrine, was announced by its president A. Padmakumar in Pampa, minutes after the temple doors were opened in the evening.

The day witnessed a tense stand-off at the Cochin International Airport after protesters prevented activist and leader of the Bhumata Brigade Trupti Desai from proceeding to the temple.

Ms. Desai, who arrived at the airport early in the morning along with six other women, could not leave the terminal as protesters chanting prayers staged a sit-in outside.

After several rounds of discussions with police and revenue officials, Ms. Desai decided to call o her visit and return to Pune.

A Festival Befitting This Temple
PROVOKE Lifestyle
6 mins read
Another Sabarimala Moment?
India Legal
6 mins read
Was It Correct To Adjudicate On A Religious Matter!
THE WEEK
3 mins read
Where All Can The Sabarimala Fiasco Lead Us To?
Outlook
10+ mins read
Supreme Court's Unimplementable Orders
THE WEEK
6 mins read
Women In Kerala Are Pushing The 'Lakshmana Rekha'
Outlook
5 mins read
Struggle For Equality
FRONTLINE
10+ mins read