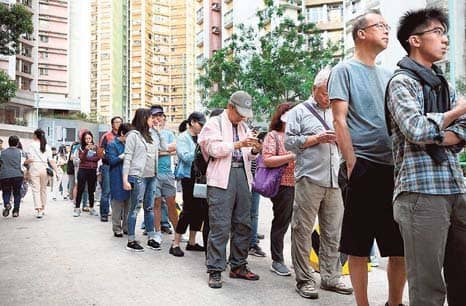 Over 71% of voters cast their ballots in the poll seen as a test of public support for anti-govt. protests

Polls closed in Hong Kong with no major disruptions on Sunday after people turned out in huge numbers to vote in district council elections seen as a test of support for anti-government protests that have persisted for over five months.

Electoral affairs chief Barnabus Fung said at least 2.94 million people voted, a turnout rate of more than 71% and a record showing that appeared to have been spurred by the political turmoil. About 1.47 million voted in the last district elections four years ago.

First results began to trickle in after midnight.

Jimmy Sham, a candidate for the Civil Human Rights Front, which organised some of the anti-government rallies, won his contest and said the voter numbers should be a sign to the government that it should listen to their voices.